BUCHAREST IS A CITY BEST EXPLORED outdoors. Legendarily founded by a shepherd, it’s no surprise its parks list among its top attractions, and the most notable of them are found not far from each other, nestled around the city center. Herăstrău Park is home not just to a small boating lake, sculptures and a tranquil Japanese garden but also to Bucharest’s most impressive and engaging attraction, The Dimitrie Gusti National Village Museum. An open-air museum spanning 25 acres, the grounds contain 272 traditional homes from rural regions around Romania, transplanted to this massive village and festooned with authentic furniture, tools and handiwork. Visitors can easily spend a full day wandering the grounds and exploring the quirky buildings. Keep an eye out for the mysterious underground houses, built mostly below surface level with straw roofs stacked above, designed to protect the homes from the elements, keep them cool in the warm months and possibly make them less noticeable to unwelcome travelers.

Just south of Herăstrău Park, and a five-minute walk from the National Museum of Art of Romania, lies the 40-acre Cişmigiu Park, sometimes called Cişmigiu Gardens. With formal gardens surrounding an artificial lake, the park contains several notable landmarks including the Monument of American Heroes; the Monument of French Heroes; and the Romanian Round, a circular walk of busts commemorating 12 of the nation’s best-known writers. With boaters rowing romantically under picturesque bridges, flower carpets spreading across endless lawns, and white peacocks and black swans roaming about, Cişmigiu Park offers a perfect base from which to explore the surrounding museums and monuments or just to spend an afternoon unwinding in tranquility. 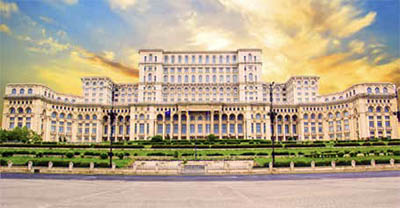 Farther south stands the impressive Palace of the Parliament, holding mind-boggling records as the world’s largest administrative building and the heaviest building on the planet — so heavy it sinks about a quarter of an inch into the ground each year. Despite housing Romania’s government, three museums and a conference center, nearly 70 percent of the 3.93 million-square-foot behemoth remains empty. Empty or full, this powerful symbol of Romania’s Communist era cannot — and should not — be overlooked.