Explore History and Culture in Lima

PERUVIAN CUISINE JUST might be the most exciting thing happening in the global culinary scene that you don’t know about. That’s probably because “Peruvian” doesn’t yet bring to mind a strong, concrete image. Mexican, Japanese, Thai, Indian — these gastronomic brands bring something familiar to the imagination. There’s a specific meal or dish we can’t help but come back to.

That’s not the case with Peruvian, though that’s not altogether surprising. Despite Lima’s evolution into one of the world’s preeminent culinary cities, Peruvian cuisine comprises too many things to bring just one meal, just one taste, to immediate recollection. To begin with, there are indigenous influences — most prominently the Incans, whose historic empire you’re likely familiar with from that postcard view of Machu Picchu.

Immigrants from Spain, Italy and Germany offered their touch alongside incoming Asian and West African populations. Tastes and ingredients were modified based on what was available in this unfamiliar slice of land along western South America, blending with the four original staples of Peruvian cooking: rice, potatoes, quinoa and beans. Over time, this hodgepodge of cultures on a plate developed into a paragon of fusion cuisine, which U.S. food critic Eric Asimov of The New York Times described as “one of the great cuisines of the world.” That’s something with which the likes of Gastón Acurio, Peru’s super chef, will agree.

If any of the myriad cultures stick out most, it’s the Spanish. Peru was a staple of Spanish colonization in the Americas, and it shows in the architecture as you stroll Centro Histórico, an urban European enclave stretching about seven blocks north from Plaza San Martín. An impressive monument of Gen. José de San Martín sitting upon his noble steed anchors the plaza. San Martín was an Argentine general and one of the primary leaders of South America’s fight for independence from Spain. He was appointed Protector of Peru when Peruvian independence was declared on July 28, 1822, following a private meeting with “El Libertador,” Simón Bolívar. 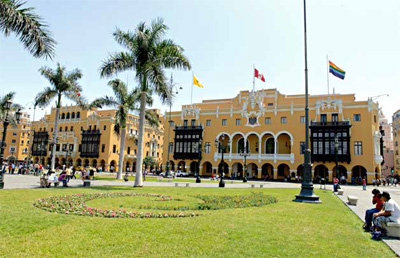 Begin a colonial architecture tour with your companions at Plaza Mayor de Lima, where the Cathedral of Lima and Government Palace of Peru sit adjacent along the square. The architecture reeks of Spanish influence — Baroque, Neoclassical and colonial — the type of remarkable buildings tourists gawk at, clicking their cameras incessantly. Meanwhile, everyday Peruvians barely give them a glance. Children sit alongside the fountain as they take a break from playing. Older sons and daughters push their elderly parents in wheelchairs to enjoy the sun. For most, it’s simply a safe place for a pedestrian to get from A to B. Round the corner for the stunning Basílica y Convento de San Francisco de Lima. With its finely detailed symmetric yellow towers, resplendent interior and well-preserved catacombs, it’s hardly a wonder the 18th-century monastery earned UNESCO World Heritage status in 1991. The catacombs are of particular interest, only discovered in 1943. Researchers found thousands of skulls and bones belonging to an estimated 25,000 bodies put to rest here until about 1808. Yes, you can still see the bones.

The best way to get over those nightmares is to surround yourself with life; head back through Plaza Mayor to Jirón de la Unión, a busy pedestrian thoroughfare paved in tiles, with businesses housed in more modest yet visually enticing colonial stylings. A shopping spree here covers everything from cheap clothing to high-end fashion with a cup of Starbucks. If you need a caffeinated jolt, keep it local with nearby 9Bares Coffee Roasters.

Lima boasts one of the most respectable coasts in the world. Whereas far too many cities cede their coast to clogged highways, Lima’s waterfront is lined with an admirable collection of parks. Start at Parque Domodossola, trotting past the photogenic Iglesia Virgen de Fátima, and enjoy the views of the Pacific Ocean over Playa Redondo. To get down to the beach, far less pedestrian-friendly, a number of bridges and staircases will get you there. With decent weather, you might even catch an international surfing event or couples watching the waves crash against the rocks.

Once hunger strikes, the Larcomar shopping center features a number of restaurants, all blending surprisingly well with the surrounding park. Eventually continue north to Parque del Amor, or Park of Love. It’s hard to miss because of the prominent statue depicting two lovers in, let’s say, a deep embrace. Indeed, as if following a cosmic queue, young couples gather here and are happy to pretend they’re all alone. Considering the surrounding artistic tiles of oranges, reds and shades of blue, it’s easy to avert your eyes. Not to mention that panoramic ocean view is right there.

Some might wonder how a writer could go this long talking about Lima without mentioning pisco sour — the drink that is to Peru what beer is to Germany. Pisco, the base liquor, is distilled all over the country. (Some Peruvians make their own, not unlike those in the States who make their own moonshine.) Add key lime or lemon juice with syrup, ice, egg white and Angostura bitters. There’s no denying the drink’s popularity across the country, especially during a business lunch or as a prelude before the night gets going. Sample one at the Gran Hotel Bolívar by Centro Histórico, which offers a classic early-20th-century vibe and remains a favorite local haunt. Literary travelers especially enjoy the rumor Ernest Hemingway consumed his fair share of pisco sours here. 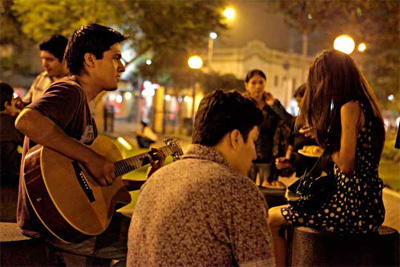 Another option is to make your own pisco sour with The Lima Gourmet Co., which as part of a day tour takes you to Embarcadero 41 Fusión for a pisco sour and ceviche lesson. The instruction is a comfortable balance between freedom — to make it seem you’re doing it on your own — and handholding to ensure you’re not about to pour something appalling down your throat.

Cap any evening with a jaunt around Parque Kennedy in Miraflores. This is the touristy neighborhood, but Limeños still own this part of town. Stray cats roam throughout the carefully manicured park, and young passersby stroll with a friendly arm around one another. Artists sell their work on the sidewalks around the park. Musicians set up camp with a lone acoustic guitar or sometimes a pair, serenading throughout the night with modern tunes. Those fancying something more traditional can make their way to the center of adjacent Parque Central de Miraflores. Grandfathers and grandmothers claim the stage, singing the Peruvian equivalent of an Irish jamboree, hands clapping in rhythm with shrieks of joy at the culmination of every song.

International and domestic flights arrive at Jorge Chávez International Airport, about seven miles west of Centro Histórico. Taxi fare from the airport to the city and its surrounding neighborhoods runs $15–17.

Where to Stay in Lima

HOTEL B Those looking for historic atmosphere in an urban setting will feel at home in the trendy Barranco neighborhood. Enjoy dinner at the hotel restaurant with an emphasis on traditional Peruvian cooking and Mediterranean influence. Sáenz Peña 204, Barranco $$$$