WHILE THE SAYING goes, “Never judge a book by its cover,” one could say destinations can be judged by their faces, or, literally and collectively, the inhabitants. If one judges Charleston, S.C., by these standards, the city ranks highly. Throughout the course of a recent visit, it became quite evident Charlestonians are proud of and well-versed in the development, industry and happenings of the Holy City. One of my Uber drivers, a Charleston transplant, easily could have doubled as a professional tour guide, and the enthusiasm she exuded for her adopted hometown was infectious.

With a proliferation of accolades bestowed on the city and an influx of related television programming, it’s no wonder Charleston has been and is becoming even more of a tourist hot spot. The expanded Charleston International Airport offers daily non-stop service to 18 cities in the United States and Canada as well as easy access to major international hubs. A coastline location and pleasant weather add to the desirability.

Hoteliers are listening, with new hotels opening or undergoing renovations in the last 18 months, including The Spectator, the first to offer butler service; a unique boutique spot, Restoration on King; and Grand Bohemian Hotel, part of the Autograph Collection. Relative newcomer The Vendue attracts an über-chic crowd to its rooftop bar. Charleston, renowned for its history and architecture, of course offers the mainstay grand dame properties like Wentworth Mansion, while the 5-star Belmond Charleston Place completed a $34 million renovation in early 2016. Charleston, a Tribute Portfolio Hotel, part of Starwood Hotels & Resorts, will open Aug. 14, 2018. 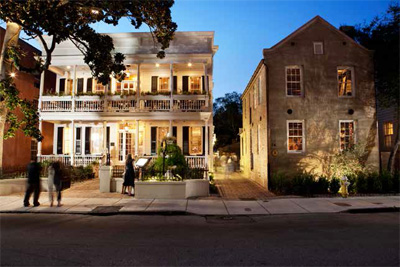 Two aspects of the city consistently drawing crowds are, without a doubt, the food and drink. Husk, helmed by Executive Chef Sean Brock, has drawn raves and the attention of the James Beard Foundation since its 2010 opening, consistently landing on countrywide Best Of lists year after year. Alongside Husk, Charleston chefs and restaurants — think Rob Stehling at Hominy Grill, Mike Lata at Fig, Michelle Weaver at Charleston Grill — regularly receive accolades. But it’s not just the fine dining causing a stir in the city — from shrimp and grits to freshly cooked biscuits and interesting cocktail combinations, there’s no wrong way to satiate oneself in Charleston.

There are quite a few other superlatives to consider for Charleston across a number of its key industries. The city is one of the fastest-growing mid-sized metros for aircraft manufacturing while also exceling in the areas of component manufacturing, vehicle assembly and the remanufacture of automotive parts. Charleston also ranks as an emerging tech hub alongside Austin, Raleigh and even San Francisco. According to the Milken Institute, Charleston’s digital economy is growing 16 percent faster than the U.S. average. Another interesting fact: The U.S. Census Bureau statistics show that, among mid-sized U.S. metros, Charleston ranks No. 1 for a millennial workforce based on total population.

Outsiders tend to agree, as the U.S. Census Bureau notes an annual net in-migration of 12,700 people. And with a lower cost of living, some of the best-performing schools in the state, reasonable home values and well-rounded lifestyle offerings, it’s easy to see why both individuals and business opt to relocate to Charleston. The Boeing Co., Roper St. Francis Healthcare System, Trident Health System and Walmart rank among the region’s top employers.

All of this, and we haven’t even gotten to what many consider one of Charleston’s biggest draws: the beach. Each of the city’s five distinct beach towns — Isle of Palms, Sullivan’s Island, Folly Beach, Kiawah Island and Seabrook Island — boasts a different vibe, character and size, offering an escape on your next vacation or business trip, a delightful spot to host an event or the optimum view should you decide to call Charleston home.

With so much to offer, including an intriguing blend of history sophisticatedly integrated into the modern vibe of the destination, it’s clear Charleston is one of the top cities to see and be seen.

To combine a bit of sightseeing with your scenic drive, take the 19-mile Ashley River Road from Charleston to Ridgeville, passing both Middleton Place Plantation and Magnolia Plantation and Gardens along the way. Both offer tours.

Journey through Lowcountry with a meandering drive on the 200-mile route from coastal South Carolina to Georgia. Along with Charleston, Savannah acts as a convenient bookend for the trip. Notable stops along the way include Angel Oak, Edisto Island, Beaufort, St. Helena Island, Hunting Island and Pinckney Island.