WHEN MOUNT ERCIYES POURED lava over central Turkey thousands of years ago, the volcanic ash formed a surreal, lunar- like landscape consisting of cone-shaped fairy chimneys and layers of soft volcanic rock called tufa. Early Christians found the pervious terrain ideal for escaping persecution by Romans and Arabs. When wet, the tufa could be easily carved like soap to make caves out of the pinnacles and even underground cities descending hundreds of feet below the surface.

At first sight, this fascinating otherworldly terrain looks like the set of a Star Wars film. Perhaps it would be even more striking from above, surmised the first hot-air balloon adventurers in 1989, who ventured to the sky for an advertising promotion. Today, hot-air ballooning above this region of Cappadocia is a must-do activity when visiting Turkey. The latest figures in 2018 report a remarkable 63 percent increase from the year prior, for a total of 537,500 passengers.

Every day, weather dependent, a maximum of 100 hot-air balloons inflate before sunrise. Reserve in advance for the first morning you’ll be in Cappadocia, since due to winds and weather, tour companies cancel almost one-third of all excursions. If you miss the first morning, you might try for a second or third morning to ensure you’ll be up in the sky during your stay. Choose a reputable hot-air balloon company like Voyager Balloons, in business since 2001. Options range from Standard to Exclusive flights, but we found the Comfort Flights best suited our family of four since we would get our own private compartment on the balloon. The balloons typically hold a maximum of 16 people, and the cost ranges €120–230 per person, depending on the level of luxury.

Though time in the sky usually runs 75–90 minutes, the entire tour lasts four to five hours. Outfitters pick up guests at their hotels sometime around 4:30–5 a.m. and transfer them to a restaurant for a light breakfast. Then it’s on to the balloons to watch the flames as they magically blow up these colorful orbs, still before dawn. Soon it’s time to make your ascent as you find your seat and leave the Earth’s surface.

They couldn’t time these rides better, especially for photographers or Instagrammers who want to capture that essential image. The sun rises alongside you, forming shadows and colors on this mythical landscape that mesmerize. So do the numerous balloons around you crowding the sky. Depending on the wind, you’ll fly over Goreme and Zelve, home to clusters of fairy chimneys, and to the many contemporary villages like Ürgüp that surround these centuries-old enclaves.

Hiring a good outfitter also ensures you’ll have an accomplished guide who can not only navigate but also speak English and tell you about the rich history of this land. The first Christians came to the valleys of Cappadocia in the fourth century, led by St. Basil. They formed communities within the caves, building living areas, bakeries and workshops. Their religious leaders lived like hermits, constructing numerous churches and painting frescoes depicting Jesus Christ and Old Testament figures. Due to the natural aridity of the region, these paintings remain remarkably well-preserved today. 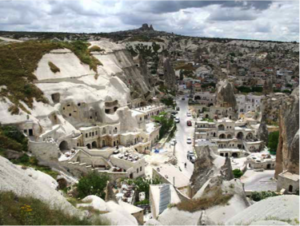 The flight ends far too quickly, and soon you’re back on terra firma enjoying a Champagne toast and leaving with a certificate of flight in your hand. The balloon ride likely will whet your appetite to explore the open-air museums of Goreme and Zelve in person, where hundreds of churches and homes are located for your cave- dwelling pleasure. The excavated underground cities of Kaymakli and Derinkuyu present another highlight of the region. An intricate maze of tunnels and stairways leads to sleeping quarters, communal kitchens, storage rooms … even stables. An estimated 60,000 people lived underground here for periods of up to three months.

A tour guide and a sweater are strongly recommended. The hallways seem endless, and one can get lost in this claustrophobic maze for hours without knowledge of the nearest exit. It can also get quite cold at eight stories under ground, even though it might be sweltering outside. But after exploring Cappadocia from the sky, on land and underground, you’ll understand why it should be on everyone’s wish list.

From İstanbul (IST), take an easy one-hour-and-20-minute flight to Kayseri (ASR) and drive another hour (or hire a transfer) to Ürgüp in the heart of Cappadocia. Esbelli Evi, the first cave hotel in the region, makes for a unique place to stay. We booked a spacious three-bedroom suite with full kitchen and patio, all carved out within a cave. Also in Ürgüp, we enjoyed Ziggy Café, where you sit on a rooftop overlooking the hills while dining on small plates of delectable eggplant-, lamb- and tomato-based dishes.

Seabourn recently announced the name of its second new ultra-luxury purpose-built expedition ship: Seabourn Pursuit. The name reflects the passion of expedition travelers to seek out and explore natural wonders and destinations through activities around the globe.

Though the Chicago area has been my home for decades, the view from the Water Tower Suite on the 26th floor of The Ritz-Carlton, Chicago made me gasp. I had admired Chicago’s dramatic skyline many times, but never from this angle. Through expansive windows, the skyscrapers of 900 N. Michigan Ave. and the John Hancock Center, now named 875 North Michigan Avenue, rose to my right. Far below, the landmark Chicago Water Tower nestled in a ring of trees. One of the few survivors of the Great Chicago Fire, a turning point in the city’s history being remembered on its 150th anniversary in 2021, the Gothic Revival relic resembled a fairy-tale castle in a children’s playset.

KLM to Operate Direct Flights to 162 Destinations for Winter

Get Your Skates on at Sea Containers London

The Don CeSar Fights Back Against Breast Cancer

In April 2021, I was skimming Facebook when an ad for a blind-folded dining experience popped up on my newsfeed. The event was hosted through a company called Fever that offers fun, interactive events in major cities and virtually for people to enjoy. Intrigued, I clicked the link to learn more. The description made the event sound exciting and mysterious. When I give someone a present for their birthday, the holidays or a wedding, I like to give the gift of an experience that the recipient can learn something from. My boyfriend’s 30th birthday was in June, when the event was to be hosted, so I thought this would be a great surprise for him.

6 Reasons to Put Austin, Texas, on Your Travel List

It’s time to start dreaming of your next trip. Here’s some destination inspiration for you. Take a visual journey through Austin, Texas, with us.