Allure of the Loire Valley

ONCE UPON A TIME, before the kings and queens of France lost their power — and their heads — in the French Revolution, they made an art of spending months at a time in lavish countryside châteaux in the Loire Valley. Hunting was the big draw, but so also was escaping from the rigors of courtly life.

Fortunately for today’s visitors in search of a more current version of combining business and pleasure, the sunny, picturesque Loire retains the countrified ambience that captured the imagination of the royals so long ago. Of course, the history of the region is more complicated than its status as a vacation destination for bored aristocracy. The Loire was a seat of power in the time of the Romans, and most of the early châteaux, some of which predate the Middle Ages, were fortified. But it is the region’s picturesque beauty and relaxed atmosphere that continue to draw sightseers to this day. In fact, part of the valley is a UNESCO World Heritage site, and many of its most famous châteaux are still here. Most are open to visitors, some have been transformed into hotels and restaurants, and a smattering remain private homes.

Of course, the allure of the Loire, a 15,000-square-mile area in central France, goes far beyond its famous houses, no matter how grand. The charm lies in the countryside itself with its fields of waving sunflowers, pastures of farm animals, acres of vineyards and picturesque hamlets so small they boast not much more than a bakery — a must in every self-respecting French village — and a café.

Locals are typically friendly here. English is perhaps not quite as widely spoken as in Paris, but most people in the hospitality sector, from the waiter to the hotel desk clerk, are eager to try out their English on you. Best of all, the region, so named for the Loire River that runs through part of it, lies so close to Paris you can get there in as little as an hour by rapid train.

The most logical place to start is Tours, a city less a leisure destination unto itself than a gateway to the surrounding countryside. Here you can pick up a rental car or hop on a local train to reach many of the area’s most interesting sites. One thing to keep in mind, however, is that unless you have months to spare, you won’t be able to see everything in this densely packed region. Your best bet is to pick a few highlights and concentrate on those. 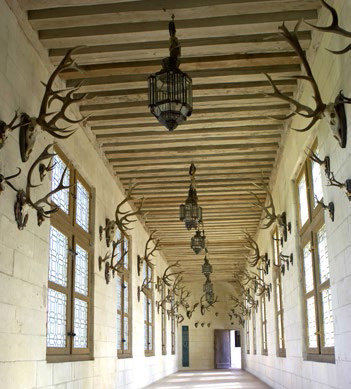 If châteaux are your main interest, probably the most famous and certainly the largest is Chambord, a 16th-century Renaissance showstopper where King Francis I would escape to hunt the local red deer that populate the grounds. The story goes that the massive double-spiral staircase, which some say was designed by Leonardo da Vinci, was constructed so residents could listen in on each other unseen. Despite being pillaged during the Revolution and neglected off and on over the centuries, the château remains intact and, in fact, housed such French treasures as the Louvre’s Venus de Milo and Mona Lisa during World War II. Nowadays, the château has been renovated to its former glory and is so popular its likeness has become a brand unto itself.

Vying for top-château status is Chenonceau, notable not only for its fairy-tale beauty but also for the fact it spans the River Cher. Visitors literally enter the edifice on one side of the Cher and exit the other, while the water flows under a series of arches that make up the chateau’s foundation. Catherine de Medici lived here at one point, supposedly using the palace as party central in the 1500s, and during World War I the long, lovely corridors morphed into a hospital ward for wounded soldiers. Probably its most dramatic role was that of escape route in World War II, when locals fleeing the Nazis used the palace as a route to the free zone on the other side of the river. Today the château is one of the region’s most famous draws for visitors, and it is open year-round.

Families with children will find some of the castles make an effort to offer an interactive experience for young visitors. In Langeais, for example, giant playing cards on the inner wall of the castle pose questions in French and English such as, “In the Middle Ages, did people eat with a fork or with their hands?”

In all, there are around 1,000 châteaux in the Loire Valley, far too many to list here, but some of the best known are Chinon, Amboise, Villandry and Azay-le-Rideau. Each boasts its own history and style, so choosing which ones you want to visit might be as much about proximity as any other factor. No matter which you choose, plan at least a few hours at each to do the visit justice.

All that said, after touring one or two châteaux, don’t be surprised if castle fatigue sets in, especially if you have children in tow.

Wine lovers can combat that fatigue by sampling some of the great vintages of the region, either with a guide or independently. Keep in mind the drinking age — loosely enforced — is 16, so parents can decide if they want to include their teens in these outings. 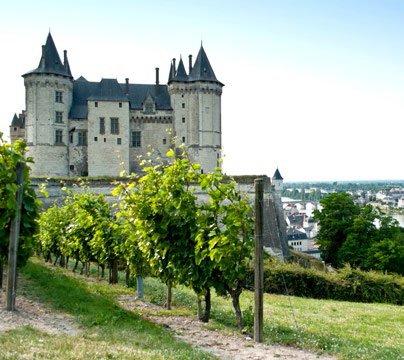 Wine tours of private wine producers, sometimes accompanied by wine-pairing lunches, are available, as are guided walks through vineyards with frequent stops to try the local products. You can also wander into wine cellars sprinkled throughout the region, particularly in towns associated with specific wines. In Chinon, for example, the Cave de M. Plouzeau in the medieval part of the city offers complimentary tastings in an atmospheric cave filled with oak barrels. An English-speaking attendant is on hand to explain the varietals on offer and to sell bottles of mostly reds that come from Le Château de la Bonnelière vineyard nearby.

Other notable wines from the Loire include Muscadet, Sancerre and Saumur.

Foodies can explore the Loire by visiting individual towns on market day. Most towns and villages turn their central square into a market, usually open in the morning, one or two days a week. Market days vary by town, but most are frequented by locals buying everything from staggering varieties of cheeses, fish and produce to artisanal olive oil, pastries and breads.

In Richelieu, for example, one of the region’s best-preserved walled cities, the market takes place Mondays and Fridays, and in addition to the usual fare, vintners are on hand to woo potential customers with tastings of local wines.

If you like the idea of cave dwelling, the troglodyte village of Rochemenier is an appealing oddity for the whole family. The site, one of several in the valley, comprises two ancient farms dug into a huge rock façade and outfitted with historical furniture, an underground home and even a chapel.

Because a river runs through it — actually several rivers, most notably the Loire and the Vienne — the Loire Valley is a natural for kayaking and canoeing. Rental outlets are widely available, and some offer a combination outing that lets you cycle through the countryside to a meeting point then kayak back along the river.

Or pair a self-guided cycling excursion with a wine and food tasting adventure, sampling local products as you go. It’s worth noting much of the region is flat, meaning biking is fairly easy going, even for the younger members of your group, and the destinations are close enough together to allow for frequent breaks en route.

Music and art have always been an important part of the culture of the Loire Valley, with various venues on hand for culture buffs. At Fontevraud Abbey in Anjou, for example, the cultural center regularly puts on concerts and art exhibitions year-round, while breathtaking sound and light shows take place in towns throughout the region on summer nights.

Famed American sculptor and painter Alexander Calder lived in the Loire Valley for part of his life, and one of his iconic mobiles sits smack in the center of Saché, a tiny town where French writer Honoré de Balzac also once lived.

Finally, for a bird’s-eye view of the valley, consider splurging on a hot air balloon ride from several of the big-name châteaux, including Chenonceau, Blois, Chaumont, Azay-le- Rideau and Villandry.

Most flights arrive at Tours Val de Loire Airport, located less than four miles from the city of Tours, and taxi transportation to city center costs about $17–34. Tours has two train stations: the main Gare de Tours, which offers rail service linking the various cities and towns of the Loire, and Saint-Pierre-des-Corps, which serves most of the TGV or rapid train service to and from Paris and other destinations. From Paris, the hour-long rail service starts from about $60. The TGV service from Charles de Gaulle Airport, costing about $70, takes about an hour and 45 minutes.

Where to Stay in the Loire Valley

CLARION HOTEL CHÂTEAU BELMONT This 65-room, 4-star hotel lies an easy 10 minutes from the airport in Tours and offers such family-friendly features as an indoor heated pool and free stays for kids 12 and younger.
57 Rue Groison, Tours $$$

HÔTEL AU CHARME RABELAISIEN Walk to the château of Amboise or to the market from this 10-room boutique property that rolls out the welcome mat for families with children.
25 Rue Rabelais, Amboise $$

Restaurants in the Loire Valley

LES ANNEES 30 Tucked among the tiny shops on a cobblestone street in the medieval section of Chinon, this stylish restaurant serves traditional fare with an elegant twist.
78 Rue Haute Saint- Maurice, Chinon $$$$