After Sunset in Stockholm

In the crown of cosmopolitan European capitals, Stockholm’s jewel shines brightly within a setting where Old World culture coalesces with a technologically advancing populace. Stark contrasts emanate from each landmass that comprises the picture-perfect archipelago. From cruising the copious canals to dining on hearty Swedish seafood favorites like herring and mackerel, Stockholm’s immaculate attention to detail and presentation is evident from every angle. After work hours, Stockholm’s myriad food markets ring with chatter from shoppers seeking an end-of-the-day snack. Östermalm Saluhall only stays open until 7 p.m., so head here early to sample a wine and cheese platter before you scurry out with a custom smörgåsbord. Find more casual dining among the food trucks parked throughout the alternative neighborhood of Medborgarplatsen. 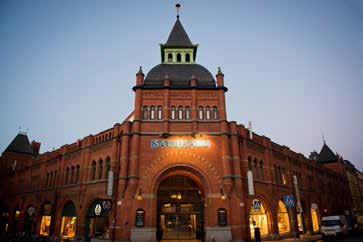 Dinnertime arrives early in Stockholm, especially in the winter when the sun sets long before the lines form outside the city’s best restaurants. Centrally located in Stockholm’s Norrmalm neighborhood, Restaurang Prinsen is a prime representation of Swedish cuisine in an elegant setting. Classic dishes like pickled herring, beef Rydberg and some of the city´s best homemade meatballs served alongside creamy whipped potatoes accentuate the neighborhood bistro environment, where quality and authenticity gleam. Behind the doors of Gästabud, located in Stockholm’s Old Town (Gamla Stan), the passionate servers and chef present their favorite varieties of meatballs and seafood in a small yet snug dining room. Local beers from Swedish microbreweries are on tap. Rub elbows with fellow vegans at Hermans, a communal-style eatery located across the water from Gamla Stan. Fill up from an all-you-can-eat buffet of veggie curry and Mediterranean vegetables with a side of sumptuous views. Nightlife in Stockholm centers on the bohemian neighborhoods of Medborgarplatsen and Hornstull, where vistas of the city unfold from the decks of rooftop bars. Both upscale hotel bars and grungy underground pubs cater to nearly every taste. For a sophisticated after-work cocktail, suits flock to Story Hotel in the neighborhood of Sturepan. Extended daylight in the summer means extra hours under the sun at designated summer clubs like Trädgården or Södra Bar at Mosebacke. As the self-proclaimed gay capital of Sweden, Stockholm has no official LGBT neighborhood. Gay-friendly bars and restaurants exist throughout the city, with a larger presence in the Old Town and in the neighborhood of Södermalm. The who’s-who of Stockholm’s gay population mingle beneath the chandeliers at Torget in Gamla Stan, while Side Track in Södermalm attracts a more casual crowd.