WHEN COMPLETED IN 2021, the Jeddah Tower will be far and away the tallest structure on the planet — approximately one kilometer from sidewalk to spire (the 168th floor). It will house luxury condos, Class A office space and a 5-star Four Seasons hotel.

Part of a 10-year, $20 billion project, the tower forms the center- piece of what will be Jeddah Economic City, a sprawling new waterfront development by the Red Sea. Altogether, it symbolizes Jeddah’s growing global stature and Saudi Arabia’s outsized ambitions.

As set forth in Saudi Vision 2030, the government’s strategic plan for the next decade, the kingdom aims to diversify the economy and create new jobs, in part by positioning itself as an international hub for health care, tourism and business meetings and events.

Indeed, identifying the meetings, incentives, conventions and exhibitions segment as a key pillar of the new economy, the country’s leaders invested some $1.6 billion in five major convention districts, including two in Jeddah: the Jeddah Economic City and Jeddah’s King Abdulaziz Airport. An expansion of the latter, officially opened this year, increases the airport’s annual capacity from 13 million passengers to more than 80 million.

Saudi Arabia’s second-largest city, Jeddah is the gateway to Mecca and Medina, two of the holiest sites in Islam. Every year, the pilgrimage to Mecca, known as the Hajj, brings hundreds of thousands of Muslims to Jeddah from all over the world. With the opening last year of the Haramain High Speed Rail, those pilgrims can now travel by bullet train to Mecca from the new airport in Jeddah, cutting the last leg of the journey from 10 hours (by car) to just more than two.

The largest port on the Red Sea, Jeddah has a proud history as a center of trade and commerce. Over the centuries, Jeddah’s many visitors left their mark on the city, influencing everything from the architecture to the cuisine. Known as Saudi Arabia’s most open city, Jeddah welcomes tourists who flock to its many popular seaside resorts — spots like the Jeddah Hilton on the recently revamped Jeddah Corniche, with its panoramic sea views and private beach club and diving center. 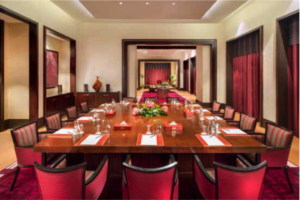 The Hilton also houses Jeddah’s largest hall for conferences and corporate events, with capacity for up to 3,500 guests, as well as outdoor event space for 1,000. Just next door, the palatial Waldorf Astoria Jeddah features seven soundproofed boardrooms, each with its own theme (such as British Windsor and Japanese Kyoto), opulent interiors and superb spa facilities. Farther down the Corniche you’ll find the Rosewood Jeddah featuring among its eight flexible meeting venues the Al Hijaz Hall and the plush Al Malaki Lounge, both accommodating up to 100 guests.

For trade shows, look to Jeddah International Exhibition & Convention Center, a sprawling, multipurpose venue with a business center, several restaurants and more than 100,000 square feet of indoor event space. Also known as the Jeddah Center for Forums & Events, the venue is easily accessed from the airport.

In addition to its many infrastructural upgrades, the kingdom aims to nurture the growth of its MICE industry by making things easier for event planners.

For its part, the Saudi Commission for Tourism and National Heritage is developing a regulatory framework that facilitates the procurement of visas and licenses. And with the advent of the Envoy Program, the Saudi Exhibition & Convention Bureau set about recruiting representatives from across the public and private sectors to liaise with international organizations, forge partnerships with would-be clients and attract new business.

There’s also the new Saudi Event Management Academy. Launched in 2017, the academy, the first of its kind in the region, seeks to prepare future leaders in the MICE sector by offering high-level courses for students, managers and industry professionals. That year, Saudi Arabia’s MICE industry grew by 16 percent, bringing in some 4.5 million attendees to more than 10,000 events. And it’s soon to grow much faster.

First announced last year by Crown Prince Mohammed bin Salman, the move is seen as a major step toward the country’s goal of economic diversification, and it’s sure to provide a major boost to the MICE industry. The government expects to welcome as many as 30 million tourists by 2030, and to prepare for that influx, the Saudi Kingdom Public Investment Fund launched yet another ambitious initiative to turn 50 Red Sea islands into luxury eco-friendly resorts.

The so-called Red Sea Project officially kicked off in April, but in the wake of the murder last year of Saudi dissident and Washington Post columnist Jamal Khashoggi, the project’s fate is uncertain. At least one foreign investor, Richard Branson, pulled out after news reports linked the crown prince and his associates to Khashoggi’s killing at the Saudi Consulate in İstanbul.

UNIQUE VENUES
When the Park Hyatt Jeddah – Marina, Club & Spa opened its doors on the Southern Corniche in 2009, Saudi Arabia’s hospitality offerings were far fewer. In the decade since, Jeddah alone added dozens of new properties. But the Park Hyatt only improved with age, and its Lazurde Meetings and Events Center remains a favorite of event planners the world over.

Situated adjacent to the hotel, the center offers 27,000 square feet of meeting and banquet facilities; a ballroom of 8,100 square feet dividable into three separate spaces; and a courtyard with capacity for 900. With its own private parking lot, the center affords meetings attendees a discreet entrance, and the hotel’s highly experienced staff is known for its exacting attention to detail.