IT WAS AN EXPERIENCE IN FIRSTS during my recent trip to Bogotá, Colombia: First trip to Colombia, first time in South America, first stay at a Grand Hyatt hotel and first Swedish massage. Not to mention, all at the largest spa facility in Colombia, South America and the Caribbean — the Zaitania Spa in the Grand Hyatt Bogotá.

After already spending a couple of days in the hotel exploring the fitness facility on my own and joining a tour with the general manager, I was familiar with the Zaitania Spa before my appointment. With 11 treatment rooms (three designed for couples) offering a wide variety of therapies, massages and facials; the neighboring near-Olympic-sized pool and several smaller therapy pools inviting guests for a dip before or after a treatment; and high-end makeup and lotions for purchase, it’s no wonder the brand-new spa extends through the entire third floor of the hotel.

The spa is a world of its own — so much so, locals can purchase a membership to the spa and use their own entrance and cubby in the locker room, completely separate from hotel guests.

Most guests enjoying a spa or therapy treatment head to Zaitania early to find a locker, put on a robe and slippers and make their way to the pool area before their appointment. Knowing I would appreciate my spa treatment 100 times more after finishing some work in my hotel room, I skipped the pre-spa pool experience.

Once I made my way to the spa for my massage appointment, I strolled around testing aromatherapy lotions as I waited for my masseur. His name was Oscar, and he greeted me with an impressively firm handshake — what I considered a good sign for my Swedish massage. He escorted me to my room, showed me where everything was, including small shorts and a top to wear during the treatment, before he disappeared so I could change and hop onto the table.

After a few days of walking all over Bogotá, I was looking forward to my 50-minute massage — a nice timeframe for my post-work, pre-dinner schedule. Oscar came back about 10 minutes later and put on some soothing music. 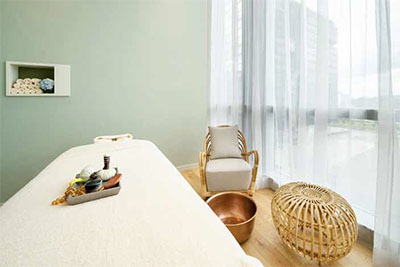 Not knowing what to expect and wondering what made the massage “Swedish,” I knew it was show time as aromatherapy scents of tangerine and vanilla filled the room. I couldn’t tell if it was the oil used for the massage or just a fragrance, but it was incredibly soothing and refreshing at the same time.

As the massage began, I could feel the tension in my shoulders and back beginning to ease. The foot-to-leg massage was a great way to begin. My masseur focused on one side first, then the other, and I thought I was going to fall asleep by the time he worked on my back and arms. Normally, I like a tougher massage with alternating pressure — something along the lines of deep tissue — but this was somewhere in between. The parts that needed deep-tissue attention, like my shoulders, received a tougher touch, but not so much on my legs and arms, where the pressure was lighter.

One unique aspect I’d never experienced before: My masseur pulled my arm behind my back with my elbow at a 90-degree angle and pulled my arm and shoulder side to side, about five times, one arm at a time. I assume it was to further loosen the muscles, but I have to admit I didn’t really feel a difference in tension. I did, however, notice the effect on my neck as he began stretching it back and forth.

Back to my shoulders and behind my neck — I guess I was super-tense — and then a head massage. Signaling the treatment was almost concluded, it was time to roll over and spend the last few minutes with a towel over my face while receiving a light massage on my arms and front of my legs.

Now a bit more alert — I was nearing sleep a few times — I could hear the music winding down and sense the entire experience coming to an end. Oscar grabbed his music, thanked me and left so I could change. I wondered why I said, “You’re welcome!” instead of thanking him, but I’ll blame it on the language barrier and my post-massage brain.

Once ready to change, I noticed one whole wall in the room was a floor-to-ceiling window, covered by blackout curtains. I wondered what the experience would have been like with the curtains open and all the sunlight of Bogotá streaming in.

The bathroom was beautiful in a simple but luxurious way. So beautiful, in fact, the steam shower tempted me before I headed back up to my room to change for dinner. The marble touches and light, subdued colors were equally calming and uplifting. I thought again about the big, beautiful pool and how I would have to find time to get in there the next day.

Nassau Paradise Island resorts pull out all the stops for foodies this season with new culinary offerings to elevate guests' experiences. The Bahamas is home to chef-driven, award-winning restaurants, authentic meals and delicious drink options. In the next couple of months, the offerings and festivals provide an unforgettable culinary experience for everyone.

Rosewood Vienna opened Aug. 1, marking Rosewood’s first hotel in the German-speaking market and its fifth European property. The 19th-century hotel, situated at Petersplatz, sits just steps away from many of Vienna’s historical and cultural sites, including St. Stephen Cathedral and Kunsthistorisches Museum. Guests won’t even have to leave the hotel to immerse themselves in the rich history of Vienna, as the hotel encompasses the apartment where Mozart lived and wrote The Abduction from the Seraglio.

Westin Hilton Head Island Resort & Spa’s new summer offers provides guests with unique and memorable ways to explore the region and relax on the property. The Lowcountry Adventure offer, in partnership with Outside Hilton Head, features a custom-designed, five-hour program for up to six people. The offer includes a variety of all-day adventures and activities around Hilton Head, such as boating local waterways, visiting private islands and exploring small towns. Guests wanting to book this experience can book a three-night stay through Oct. 31, with a 21-day advance booking required.

For the first time in American Queen Voyages’ history, the cruise line offers free round-trip air from select gateways for guests booking their entire voyage from either San Diego to Puerto Vallarta or Puerto Vallarta to San Jose, Costa Rica. These new itineraries offer 15-, eight- and nine-day voyages to these destinations beginning Oct. 3.