THE RELAXATION STARTS NOW, in Johannesburg International Airport. Not many people can say that. The lines for security and boarding, the hubbub in and around the duty-free shops and the customer announcements — all seem distant. And they are. The main passenger terminals are out of sight on the other side of the airfield. Here we are in the exclusive Fireblade VIP Terminal, snacking and sipping Nederburg Sauvignon Blanc while our private plane awaits.

Our flight takes 90 minutes, heading southwest. We skirt the hazy sprawl of Johannesburg and fly across vast swaths of farmland. As we descend, the air is clear and the earth below is vividly red, speckled with trees and bushes and laced with game trails. We are arriving at Tswalu Kalahari, South Africa’s largest privately owned game reserve.

We transfer by open Land Rover to the Motse, one of the reserve’s two luxury camps. The camp consists of just nine thatched legae, the Tswana word for “home”; ours is on the camp’s edge, with a veranda looking out onto the Kalahari wilderness. Birds flitter and trill in the nearby acacia trees. Two gemsbok — large, straight-horned antelope — amble through the brittle grass toward the camp’s waterhole.

We arrived during the mid-afternoon lull. Guests lounge in their legae, where cold drinks and snacks are provided, or by the pool. As the ultimate capper to an unstressful journey, we opt for the spa.

In keeping with Tswalu’s ethos, the spa is in harmony with its surroundings. The décor is stylishly rustic, with unhewn walls and reed ceilings. We wait initially in the lounge before transferring to the couple’s room: two beds, a therapist each. I choose a hot stone massage while my wife selects the Signature Tswalu Touch Experience. The treatments incorporate local ingredients including Kalahari red sand, white crystals from a desert salt pan and aloe fibers.

As the therapists knead the knots out of our muscles and exfoliate our skin, the African bush provides the soundtrack: the pulse of cicadas, the rhythmic call of a Cape turtle dove, the rustle of a nyala antelope browsing immediately outside.

At 4 p.m. we clamber into an open Land Rover for a game drive. As the day cools, the animals become active. Our goal is to see one of Africa’s most elusive animals. In a lifetime of safaris, I’ve never seen one … until now. Our tracker, Jackson, points at a pinkish shape moving across scrubland. Our guide, Nicole, pulls over, and we get out. We stalk away from the road and are soon rewarded with a clear view of an aardvark.

Shy and nocturnal, these bizarre-looking anteaters have become habituated to humans in Tswalu and are often seen at dusk. This is the only place in Africa in which aardvark sightings are almost guaranteed. 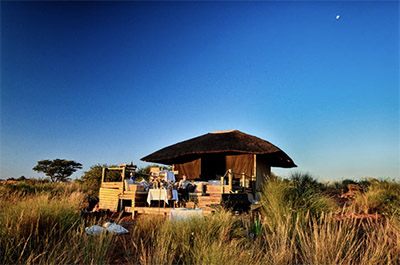 We stop for sundowner drinks, then drive on in darkness, with Jackson scanning the bush by spotlight. We see a jackal, an owl, a brown hyena. We return to the Motse for an abundant barbecue (or braai, as it’s known in South Africa) in the outdoor dining area.

Before dawn the next morning, another game drive. Shortly into it, Nicole stills the engine. We listen. Lions roaring. She estimates they’re about seven miles away. We go in search of them as the sun rises, and eventually find a pride resting in a clearing. Even at rest, they’re formidable; the lions of the Kalahari are the largest lions in the world.

Back to camp and, after lunch, another spa session. We opt for a neck and shoulder massage, smoothing out the tension generated by gripping onto the Land Rover as it made numerous off-road excursions during our morning drive.

During our three days at Tswalu, we rack up numerous magical highlights. On the final morning, we spend unforgettable minutes with a group of meerkats as they emerge from their burrows and prepare to head off for a day’s foraging. They stand sentry-like within touching distance, alert for predators. We’re mostly ignored; they’ve come to view humans as honorary meerkats.

Prior to the meerkats, Nicole and Jackson had picked us up from the Malori sleep-out deck, a thatched wooden platform in the middle of nowhere. We had been left there the previous evening, with a radio to contact the camp in case of emergencies. Otherwise we were completely on our own. We had been supplied with everything we needed for a delicious braai and a cooler amply stocked with drinks.

After dark, we rolled the bed out onto the deck and lay beneath the dazzling desert sky, just us and the nocturnal sounds of the Kalahari. The spa treatments soothed our bodies, but the experience of sleeping under the stars went deeper. It was a tonic for the soul.

Nassau Paradise Island resorts pull out all the stops for foodies this season with new culinary offerings to elevate guests' experiences. The Bahamas is home to chef-driven, award-winning restaurants, authentic meals and delicious drink options. In the next couple of months, the offerings and festivals provide an unforgettable culinary experience for everyone.

Rosewood Vienna opened Aug. 1, marking Rosewood’s first hotel in the German-speaking market and its fifth European property. The 19th-century hotel, situated at Petersplatz, sits just steps away from many of Vienna’s historical and cultural sites, including St. Stephen Cathedral and Kunsthistorisches Museum. Guests won’t even have to leave the hotel to immerse themselves in the rich history of Vienna, as the hotel encompasses the apartment where Mozart lived and wrote The Abduction from the Seraglio.

Westin Hilton Head Island Resort & Spa’s new summer offers provides guests with unique and memorable ways to explore the region and relax on the property. The Lowcountry Adventure offer, in partnership with Outside Hilton Head, features a custom-designed, five-hour program for up to six people. The offer includes a variety of all-day adventures and activities around Hilton Head, such as boating local waterways, visiting private islands and exploring small towns. Guests wanting to book this experience can book a three-night stay through Oct. 31, with a 21-day advance booking required.

For the first time in American Queen Voyages’ history, the cruise line offers free round-trip air from select gateways for guests booking their entire voyage from either San Diego to Puerto Vallarta or Puerto Vallarta to San Jose, Costa Rica. These new itineraries offer 15-, eight- and nine-day voyages to these destinations beginning Oct. 3.