The Namib Desert, 1992. After hours of driving across parched African emptiness, we reached an oasis of trees and shade surrounded by giant red dunes. Two dozen trucks arrived there before us, along with RVs, tents and tables. Power lines webbed the whole makeshift encampment. Generators and air-conditioners hummed. People bustled around. Attention seemed to focus on a particular tree in the middle distance. I aimed my binoculars and saw more people, a line of empty directors’ chairs, a movie camera, reflectors, a sound boom … and Reese Witherspoon.

Shooting any movie proves an expensive, complicated business, all the more so when the location is a remote part of Africa hundreds of miles from the nearest town. The movie, now largely forgotten, was called A Far Off Place. Although only 16, Reese Witherspoon appeared to take it all in stride. For me, it was a first glimpse of a movie crew on location. I’d never imagined the scale of the undertaking, just how many vehicles and people and cables it involved.

To an extent, filming a movie on location is a last resort. Countless variables — weather, politics, wild animals, members of the public — can cause delays and spiraling budgets. On the other hand, however, there is no greater movie set than our planet.

A month after my encounter with Reese Witherspoon and team in Namibia, I bumped into another film crew at a rustic hotel in Bhutan. I was trekking in the Himalayas; Italian director Bernardo Bertolucci was making Little Buddha. I soon learned to give the mercurial director a wide berth whenever I saw him but shared a memorable evening with one of the stars, Chris Isaak, in the hotel bar. When released, the movie received mixed reviews, but all raved about the scenery. 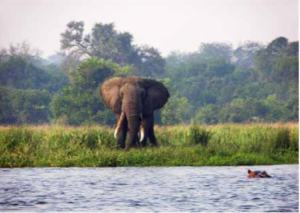 Filmmakers long used stunning locations to sell movie tickets. John Huston shot his 1951 movie The African Queen, starring Humphrey Bogart and Katharine Hepburn, in challenging conditions in Uganda and the Congo; the authenticity radiates from the screen. Thirty-four years later, Out of Africa, starring Meryl Streep and Robert Redford, inspired countless tourists to visit the plains and mountains of Kenya dressed in khaki imitation of the two stars.

The 1962 movie Lawrence of Arabia provided such a vivid, immersive experience of the Arabian desert that it still defines the region. Many of the enduring clichés of Arabia owe much to the sight of Peter O’Toole and Omar Sharif on camels.

Even when the actual location proves unfeasible, either due to expense or politics, the world offers no shortage of stand-ins. Seven Years in Tibet, starring Brad Pitt, never left the Americas … instead filming the dramatic Tibetan mountain sequences in Argentina and Canada. 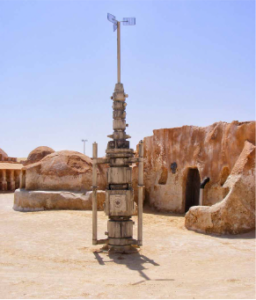 During the Cold War, and perhaps for the foreseeable future, Helsinki stood in for various Russian cities. Morocco, meanwhile, carved out a lucrative niche as a movie version of Beirut, Somalia, Iran, Iraq and many other trouble spots. Another North African country, Tunisia, is known to movie-goers as Luke Skywalker’s home planet, Tatooine. (You can visit several locations, including the town of Tataouine, which lent its name.)

Some people specifically travel in search of the locations of their favorite movies; many of us travel to enrich our lives. The two are not mutually exclusive. The Julia Roberts movie Eat Pray Love centers on a quest for self-discovery on a globetrotting journey. Shot on location in New York, Italy, India and Indonesia, the movie inspired many people who saw it to embark on similar spiritually therapeutic journeys. 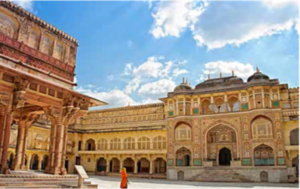 The Best Exotic Marigold Hotel and its sequel, The Second Best Exotic Marigold Hotel, were both shot in Jaipur, India, featuring a stellar British cast (plus Richard Gere) finding a new lease on life in old age by relocating to the titular hotel. Another movie featuring seniors discovering themselves through travel, 2007’s The Bucket List, stars Jack Nicolson and Morgan Freeman. But here the magic of movies trumps the magic of travel. Although it includes scenes set in the French Alps, India, Egypt, China and Tanzania, the two main stars were mostly filmed in Hollywood against projected backdrops.

Such “cheating” has always been part of movie making. (Humphrey Bogart never set foot in the real city of Casablanca.) With continuing advances in CGI, expect stars increasingly to travel the world while remaining in Los Angeles. StageCraft — developed by George Lucas’ Industrial Light and Magic — offers a new technology that can vividly recreate any location within the studio. It could spell the end of film crews making camp in remotest Namibia or Bhutan.

But while Hollywood looks for alternatives to location shoots, an entire genre of television reality shows make exotic locations the point. One of the first, developed in 2000 by CBS, Survivor transplanted contestants from their comfortable American lives to, in the first series, the wilds of Borneo. Forty seasons later, the show has tested its contestants to the limit in Kenya, Polynesia, the Amazon, China, Gabon, Nicaragua and Cambodia, among other sites. Lately, its episodes primarily take place on Fiji’s Mamanuca Islands.

Discovery Channel took the concept to greater extremes with Naked and Afraid which, since 2013, has exposed its contestants, stripped of all the basics of modern life — including clothes — to remote environments. It filmed on location in more than 35 countries and on every continent except Antarctica (not compatible with the naked element).

The Amazing Race puts the emphasis more on travel than survival, with contestants racing across the globe in search of clues for their next destination, with an ultimate prize of $1 million for the winners. First aired by CBS in 2001, it has visited 92 countries and earned 10 Emmys for Outstanding Reality-Competition Program. With limited funds and cryptic information, the contestants muddle their way around the world, experiencing places far removed from the usual tourist routes.

Not every reality show relies on a competitive element for its drama. Star Wars actor Ewan McGregor completed three epic journeys for television, originally for British TV but now streaming on Apple TV+. Traveling by motorbike with his friend Charley Boorman, the first series, Long Way Round (2004), took them from London to New York via Russia, Kazakhstan, Mongolia, Alaska and Canada. In Long Way Down (2007) they traveled from Scotland to Cape Town across the entire length of Africa. In Long Way Up (2020) they switched to experimental electric Harley-Davidsons to ride from the southern tip of South America to McGregor’s home in Los Angeles. In all three series they meet with the kindness of strangers, cope with bad roads and sudden accidents, and contend with red tape and criminals.

Movies offer us a stylized view of the world. Reality shows get much closer to the real thing. When you follow the trials and tribulations of contestants in The Amazing Race or Ewan and Charley on their marathon rides, you understand that, for most of us, one of the most addictive aspects of travel is that there is no script.