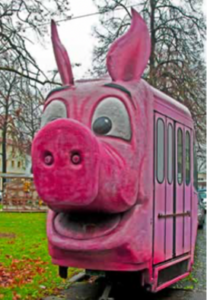 The quirkiest of these began as personal collections and just kept growing … and growing. Take, for example, the Pig Museum in Stuttgart, Germany. When Erika Wilhelmer’s collection of 25,000-plus pigs and related artifacts outgrew her home in Bad Wimpfen, she found space for her museum in a former slaughterhouse. This might seem odd for a collection made up largely of cute pink piggy figurines and stuffed toys, but the displays celebrate the porcine in all forms, from The Three Little Pigs to BLTs.

Pigs are represented in fine art — paintings, sculpture and ivory netsuke — and kitsch, as well as postage stamps, jewelry and mounted wild boar head trophies. Lighthearted themes bring a sense of order to the more than 50,000 pigs, adroitly curated with a sense of humor. A restaurant downstairs specializes in, of course, traditional German pork dishes.

Like the Pig Museum, the Bunny Museum began with a single stuffed toy. As rabbits will, the bunnies multiplied until the collection outgrew the home of Candace Frazee and Steve Lubanski and moved into a building in Altadena, California. A giant bunny from a Rose Parade float marks the spot. Featuring more than 45,000 bunnies, displays capture all the kitsch and cuddly of bunnydom but offer some more thought-provoking moments as they contemplate the rabbit’s relation to culture and society and even language.

The world’s first cat museum, in Kuching, Malaysia, tells a different story. Not a private collection, it is owned by the city of Kuching — which in Malay means “cat” — and housed in City Hall. The more than 4,000 artifacts arrived here in 1988 from the National Museum in Kuala Lumpur.

Visitors enter beneath the face of a giant cat to find well-curated exhibits considering cats in various cultures; one focuses on the traditional Japanese beckoning cat figures, one on cats in Oriental art, another on their importance in Ancient Egypt. The museum features plenty of popular culture and cat tchotchkes, including sections devoted to Garfield and Hello Kitty.

Among the most bizarre museums are those that originated for scientific purposes. While many of these contain some gruesome early surgical devices, along with pickled body parts, most mainly seek to educate the public about health and medicine. Objects on display at the International Museum of Surgical Science in Chicago include gallstones, historic surgical blades and glass eyes, but most comprise contemporary exhibits exploring technological developments in medicine. The Meguro Parasitological Museum in Tokyo, however, remains entirely devoted to samples of tapeworms and other parasites. 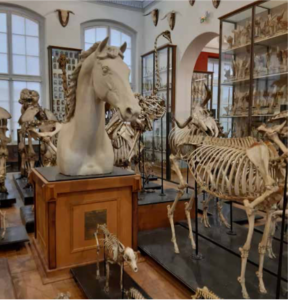 The Fragonard Museum in Maisons-Alfort, France, founded in 1766, began as the anatomy collection of the Royal Veterinary School of Paris. Along with skeletons, models of physical malformations and various anatomical displays, visitors can view a bizarre collection of flayed and preserved animals and humans.

The figures, minus skin but with bones and muscles varnished to preserve them, served as teaching models of anatomy at a time when human dissection was not allowed. Even more disquieting is the way in which Fragonard “posed” these preserved cadavers — one riding a flayed horse — in vignettes designed to reflect scenes from history and mythology.

The Museum of Questionable Medical Devices, part of the Science Museum of Minnesota in St. Paul, displays devices touted to cure or prevent human ailments. These range from electric shock machines and X-ray boxes used in shoe stores in the 1940s to show proper shoe fit to a “rejuvenator machine” that engulfed patients in radio waves, magnetic fields and ultraviolet light to supposedly reverse the aging process.

Local industries inspire some unusual museums. Perhaps the omnipresence of a large vacant factory prompts locals to fill it with a museum recording its past, or local residents may begin collecting tangible remnants of a region’s former way of life before the memory is lost. Those museums open windows into the recent past.

Before the last of more than 50 sardine packing plants along the Maine coast shuttered in 2010,

Ronnie and Mary Peabody began collecting their equipment, artifacts and stories. Others joined the search, and by 2005 they built the Maine Coast Sardine History Museum in Jonesport, once the site of 15 canneries. Punching an original time clock on entering, visitors see equipment used to catch, process and can sardines, including a colorful collection of vintage labels.

A closed silk factory in Panissières, France, provided both inspiration and location for a museum. This city once manufactured 80 percent of French necktie fabrics, and today the Museum of Neckties and Textiles presents the craft of silk weaving and neckwear through exhibits and actual working looms. At the Soap Museum in Belver, Portugal, visitors can take home a bar of custom soap they craft themselves. Not all local industries were legal: In Gore, New Zealand, Hokonui Moonshine Museum celebrates local ingenuity in defiance of prohibition laws.

Like manufacturing, local agriculture inspires museums. Olives have been central to Nyons, France, since Roman times, and Museum of the Olive Tree shows how the town became the source of one of France’s finest olive oils. Displays include Ancient Roman vessels and lamps. The European Asparagus Museum in Schrobenhausen, Germany, celebrates the region’s best-known crop, and on Prince Edward Island, The Canadian Potato Museum boasts the world’s largest exhibit of potato-related farm machinery, agricultural artifacts and potato lore. A giant potato sculpture marks the entrance.

Leipzig, Germany, is known for its coffee houses, and 15 rooms above one of Europe’s oldest hold Coffe Baum Coffee Museum. More than 500 artifacts explore the drink’s history, from early trade through the origins of coffee house culture and the invention of Melita filters. Stories of commercial skullduggery and political intrigue abound, along with fascinating facts and artifacts of coffee’s social history. If the museum raises thirst for a cup of Joe, the coffee house lies just downstairs. 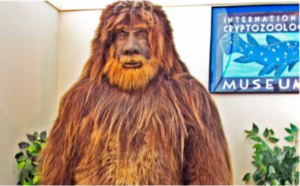 The personal passions — or obsessions — that become museums can run deeper than just collecting objects. Loren Coleman made a lifetime study of Bigfoot and other unknown creatures, traveling the world to collect sighting accounts, scientific studies and cultural artifacts. It was a natural step to open the world’s only International Cryptozoology Museum in Portland, Maine. Combining scientific information, legend and popular culture, exhibits include photos of recorded sightings, footprint casts, artists’ renditions, Hollywood props, hoaxes and kitschy souvenirs of Nessie and other creatures. (Fans of Mothman can find a museum devoted to him in Point Pleasant, West Virginia.)

While many pigs and bunnies were contributed by past visitors to those museums, the Umbrella Cover Museum in Peaks Island, Maine, must hold the record for the ultimate in crowdsourcing. This tongue-in-cheek collection began when Nancy Hoffman discovered a few umbrella covers while cleaning a closet. With the avowed “mission of celebrating the mundane in everyday life” and contributions from a few friends, she opened her museum in a little seaside cottage.

As word spread, people showered her with umbrella sheaths, and in 1972, with about 700, the museum made Guinness World Records. They now number more than 2,000 from more than 70 countries. A visit comes with a tour and Nancy singing and playing “Let a Smile Be Your Umbrella” on an accordion.