Founded during the Spanish conquest. in. 1537, Guayaquil – the largest city in Ecuador, with a population of about 2.5 milloion –  is the country’s main business center and port. During the past two decades this tropical city drenched with the brilliant colors of fruit trees, flowering palms, native plants and wild orchids, took on some of the most comprehensive urban revitalization projects in South America. These all led to new foreign direct investments, safer neighborhoods, historic restorations and an increase in leisure visitors. 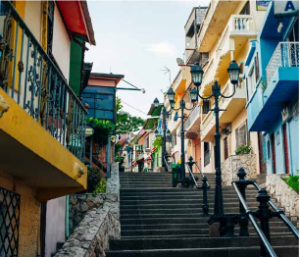 The Malecón 2000 project revitalized about 1.5 miles of riverfront along Río Guayas, stretching from its southernmost point at Mercado Sur to Santa Ana Hill and Las Peñas north of downtown. Featuring restaurants, a museum, a performance space, a movie theater and a shopping mall, the area proves a pleasant and safe place to walk and explore the city. At the northern end, climb the 444 steps leading through small alleys dotted with multicolored houses to Santa Ana Lighthouse and spectacular views.

The once-polluted Estero Salado waterway now offers a waterfront park where bird watchers, joggers and visitors enjoy on-site attractions including a 1,300-foot boardwalk. Another project created Nuevo Parque Histórico, a park located in a mangrove wetland between the Daule and Babahoyo rivers, which merge to form Río Guayas. In 2013 the national government built two modern pedestrian bridges connecting downtown Guayaquil, Santay Island and the town of Durán to allow people to easily make ecotourism trips to areas east of the city.

The city expects its next major project, still in the design stage, to prove even more transformational. Ciudad Nueva Guayaquil will create three distinct districts — Marina, Central and Garden — on the 593-acre plot currently occupied by Guayaquil’s airport, once the airport relocates farther from city center. The present terminal will remain, reutilized as a transportation center with retail and entertainment spaces.

These new mixed-use, live-work districts will all connect via a central boulevard, an extensive linear park with a stream and green spaces offering biking and walking paths, small cafés and social areas. According to Perkins Eastman, the project’s design firm, the multibillion-dollar, 1 million-square-foot project will become a vital part of the city and include a new Guayaquil Convention Center and a Charles Darwin museum. “This New City vision will be a catalyst for economic growth, cultural activities and entertainment; it will be the spark that begins Guayaquil’s journey to becoming the city of the future,” said Stephen Forneris, a principal with Perkins Eastman.

As an example, in 2021 Bath & Body Works opened an outlet at Guayaquil’s upscale San Marino Shopping Mall, the first of two planned in the country. “In Guayaquil, the Ecuadorian likes the new, the international, the exclusive, and that is what we bring: products never sold here before,” said Fahed Safadi, general manager of the brand in Ecuador. In the same mall, Victoria’s Secret opened last year, and many other globally recognized stores will arrive in 2022.

CHECKING IN WITH FELIPE CORREA
Founder and managing partner, Somatic Collaborative design practice and professor and chair of architecture, University of Virginia School of Architecture

Many Guayaquil colonial buildings have been lost. Has the city done a reasonable job of restoring its historic structures?
The Las Peñas neighborhood is a great example of a conservation project that gave this area a new lease on life while also showcasing important samples of 19th-century architecture.

Most of the urban fabric downtown was built in the 20th century, yet one can find several architectural projects of design significance. Three that come to mind are Municipal Palace, Mercado Municipal Sur and the Moorish Clock Tower. All three show the civic dimension of public works projects in the early decades of the 20th century.

Other than the Ciudad Nueva project, what other urban revitalizations projects are in the planning stages?
In the last 20 years, Guayaquil witnessed major transformations in the rehabilitation and creation of new public spaces in the form of city parks. In addition to Malecón 2000, we have seen projects like Parque Los Samanes which, when fully implemented, will be the third-largest park in Latin America, serving as an important green lung and water management infrastructure for Guayaquil. Such projects are essential in a city that will have to aggressively confront and adapt to sea level rise and the impacts brought by environmental change.

What would you suggest first-time visitors see and do in Guayaquil?
I would take first-time visitors on a tour of the broader aquatic landscape of the city. The ecologies created by the mixing of waters between Daule River and Estero Salado (a salty estuary part of the Gulf of Guayaquil) create one of the most fascinating urban ecologies in the world and is a powerful laboratory on how cities engage their larger natural environment.

As an architect, what cultural attractions in the city do you find especially enjoyable?
I like to visit Centro Cultural Simón Bolívar/El Museo Antropológico y de Arte Contemporáneo. I always enjoy the temporary exhibitions and the larger archaeological collection they keep on display. 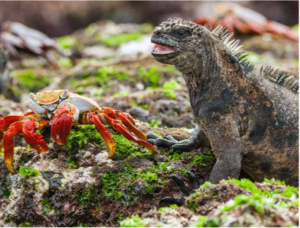 For many leisure or business visitors to Guayaquil, the Galápagos Islands are a close bucket-list destination. Flights to Galápagos (one hour, 45 minutes) depart from Guayaquil, arriving at either Baltra Island or San Cristóbal Island. The archipelago of 19 islands lies 620 miles off Ecuador’s Pacific coast and is a protected World Heritage site. Visits to most of the islands require a licensed guide from Galápagos National Park. The best way to appreciate the destination is with the smaller cruise boats carrying 16–32 passengers. Book multiday cruises at least a few months in advance and arrive in Guayaquil one to two days before your cruise date. Most Galápagos cruise itineraries are quite expensive but well worth the price.

If time allows, plan to visit the city of Cuenca, 8,500 feet high in the Andes Mountains, 3.5 hours east of Guayaquil. As the most important Inca ruins site in Ecuador, the entire Ingapirca complex is a sanctuary and bastion at the same time, with architecture similar to the buildings in Cusco, Peru.

Closer to Guayaquil find many of the best beaches on Ecuador’s Pacific coast located in or near Salinas, a two-hour drive from Guayaquil. The resort town boasts miles of sandy beaches and dozens of small restaurants serving Ecuadorian-style ceviche or fresh shrimp on the grill.

Mami-T
This small eatery on the boardwalk in Puerto Santa Ana serves great fish dishes and the ubiquitous moors, an Ecuadorian rice and lentils dish with cheese, egg or guacamole. The sangria with chopped fruit or a cold local beer pairs perfectly in warm weather.
9, Edificio Riverfront II, local 5 y 9
$$

OFFICIAL LANGUAGE
Spanish. Indigenous languages are official in regions where they are spoken; English is spoken at most hotels, larger shops, restaurants and businesses.

COMING & GOING
U.S. citizens must have a valid passport for visits up to 90 days; for longer visits they must obtain a visa before arrival.

This year, travel trends suggest travelers look for off-the-grid destinations to help them disconnect, explore new opportunities and expand their learning. SAVIA, a 17-acre private reserve located in the cloud forest mountains of Monteverde, Costa Rica, offers just that. Guests embark on a curated forest immersion adventure, perfect for embracing, connecting with and learning about the surrounding nature in a sustainable way.