THIS REVIEW OF THE UNION LEAGUE Golf Club at Torresdale is as much a look back at my career in the travel industry, dating to when (and possibly before) Antero Palo, marketing director, Finnair, won our inaugural Turkey Bowl in 1994. The Turkey Bowl means different things to different people. For some, it is a touch football game played on Black Friday, the official kick-off to the Christmas holiday shopping frenzy. To many in the travel industry, it is a golf tournament held on Black Friday among industry friends and advisory board members. The game stretches beyond the existence of Global Traveler itself.

While the weather on Black Friday can be warm and balmy, more likely it’s bitterly cold, with driven balls ricocheting off frozen ponds, slamming frozen greens and bouncing. Sometimes we see flurries, sometimes rain; one year was even snowed out. This past year was cold but not bitter, and nine of us separated into three threesomes to compete in the annual tournament. The group included Mike Donahue, chairman of the Global Traveler Advisory Board; his son Michael and friend Pete; Bob Hancock, Wayne Tallman, Jim Bolger and Chris “Yammi” Ottaunick, all also of the Advisory Board; and my brother Gerry Gallagher, in Philadelphia for the Thanksgiving holiday from Dallas.

Without the love and care of the Union League of Philadelphia, Torresdale Frankford Country Club might not be here today. Since the Union League purchased the club in 2014, membership has exceeded expectations and a historical landmark now makes a growing contribution to the community.

The Union League immediately earmarked at least $8 million for renovations, turning The Union League Golf Club at Torresdale into one of the best facilities in the region. Improvements continue, recently adding new carts with GPS positioning for every shot. Sean Palmer, director of golf, keeps everything running smoothly and surrounds himself with a knowledgeable and friendly team.

Following is a rundown of our Turkey Bowl outing and the club’s key holes. Due to a frost delay, all groups played off the back and front nines at about 10:30 a.m. Recovering from the Thanksgiving overstuffing, we all played from the white tees. 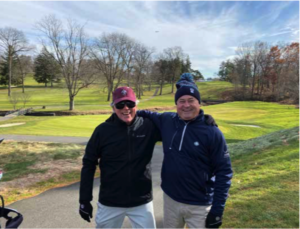 HOLE 11 | 193 yards, par 3
I was in the group with Bob and Gerry, and after playing the 10th hole miserably, we tried to reclaim some sense of inner golf Zen. This challenging par 3 plays a little longer than expected. I always tee up a 3-wood, assuming I will achieve a little loft and make the green. A creek runs diagonally from left to right and then continues past the green. Many balls fall short and land in the creek. I hit the green with a great slam; Gerry and Bob came up short but recovered with decent chips to card bogeys. I two-putted, thanking Donny Ross for allowing my inner shooter to succeed!

HOLE 18 | 345 yards, par 4
This was our ninth hole, as we were playing the back nine first. The weather started to grow colder and the balls were not traveling the same distance. Ryan Daily, caddie master, joined us for a few holes, adding to the fun of the Turkey Bowl Championship.

Ryan murdered his ball off the tee and a little right of the fairway. From the tee box you want to favor the right side, as the approach is uphill and blind; aim for the American flag flying at the clubhouse. My shot went a little left; and although I hit a nice iron to the green, it caught the left edge and in Donald Ross fashion kicked into the deep sand trap on the left of the green. Gerry and I got out of our trouble — a nice sand shot got me back in the game — and we carded a bogey. Bob came up clean with a nice drive in the center right side of the fairway and a shot to the green, two-putting for par. Ryan overhit the green, losing a shot. The Union League made this hole more user-friendly, relocating the cart path to the right of the hole so players move away more efficiently to keep at pace.

HOLE 1 | 318 yards, par 4
Bob and Gerry disappeared to add layers to their clothing as the temperature dropped and the wind picked up. We poured coffee and hot chocolate for a welcome bit of warmth. We were ready to step up our play, and I am pleased to report scores greatly improved on the front nine; Bob carded a 38, a vast improvement.

Big hitters can easily reach the creek before the green — consider a 3- or 5-wood from the tee box. My drive plowed through the fairway and landed in the right rough before the creek but still on the slope. It was a challenge to find balls in the winter rough. I had a nice shot to the green, but as the green sits elevated, my ball came up short. In the summer the ball would roll all the way back. It took me a chip and two putts to make bogey. This green underwent great reconstruction, removed in pieces and reassembled after adding drainage and rebuilding to keep Ross’ original design.

HOLE 8 415 yards, par 4
I often tout Hole 8 is ranked as the most difficult par 4 in Philadelphia, and this might be true … or maybe it’s just that the city of Philadelphia doesn’t have a lot of golf courses. Most of the “Philadelphia Greats” lie outside the city limits. Nonetheless, Hole 8 requires an accurate drive left center and long in order to make the green in two. Many players end up too far right, consequently blocked out by a white house which nearly protrudes on the edge of the right fairway.

I threw myself into the drive, landing the best of the day in the proper position, left of center. My next shot was yet another great hit, maybe a little overpowered but just enough for Ross to grab my ball and drop it in the left trap. A nice out and two-putt secured a bogey. Bob followed with a bogey, but Gerry, troubled by a weak drive, lumbered up to putt in for an undisclosed number.

Overall, a glorious day followed by nice conversation, with the awarding of the trophy to Wayne Tallman completing the 25th annual Turkey Bowl.