WITH ITS ENTICING BLEND OF centuries-old traditions and decidedly 21st-century sophistication, Seoul crafted a reputation as one of the world’s top sites for meetings, incentives and other global events. According to the International Congress and Convention Association, for example, Seoul scored among the top 20 cities in the world in terms of number of international meetings hosted in 2018, ahead of Copenhagen and just behind Tokyo.

The South Korean capital lures meeting and incentive groups with various selling points. Seoul is both a governmental and an economic hub, of course. And it’s easily accessed via the sleek Incheon International Airport, which continues to upgrade its facilities. In addition, Seoul Tourism Organization is dedicated to increasing the destination’s profile with meeting and event planners through its Seoul Convention Bureau, which operates the MICE Seoul website.

Among the convention bureau’s initiatives is PLUS SEOUL, a program revamped in 2019 to make it easier for meeting planners to organize events in Seoul. The program provides financial support for bidding, promotion event hosting and even conference-specific apps, and it also helps planners create customized experiences and features for meeting and incentive programs. Options include teambuilding activities, branded transportation and amenities, and even on-site Korean cosmetic booths. Groups can also receive customized welcome messages at the airport baggage claim as well as gifts imbued with Korean culture and traditions.

Seoul boasts a variety of noteworthy meeting and convention facilities, including the nearly 356,000-square-foot AW Convention Center and the aT Center, offering two exhibition halls, eight meeting rooms and a 400- person conference hall. 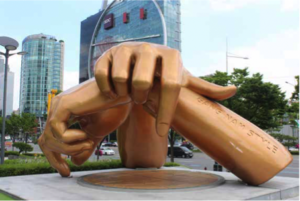 Even larger in scale is the COEX Convention & Exhibition Center, located in the popular Gangnam district. The facility hosted the G20 Seoul Summit in 2010 and encompasses more than 387,000 square feet of exhibition space with four exhibition halls; 54 meeting rooms; and a 7,000-person convention hall.

COEX is especially popular because of its location near a variety of upscale hotels such as the InterContinental Seoul COEX and Oakwood Premier COEX Center. The facility also connects to Starfield COEX Mall, billed as the largest underground shopping mall in Asia and home to COEX Aquarium, one of South Korea’s largest aquariums.

At nearby SMTOWN, a museum and performance space operated by a music production company, MICE groups can immerse themselves in the uniquely Korean musical phenomenon called K-pop. Indeed, South Korea’s contemporary cultural trends provide plenty of opportunities for unique group experiences including private musical and dance performances and even makeup classes that can transform any meeting attendee into a pop star.

Also in the pop-music vein, the appropriately named Just KPOP Entertainment Restaurant is a dining venue available for buyouts of up to 240 people, with an international menu designed to appeal to a wide audience and a stage for presentations and seminars as well as live music, DJs and dance performances.

MICE groups looking to experience traditional culture will find even more to do in Seoul. Korea House, for example, offers an array of cultural experiences that can include cuisine, music and dance. The venue’s historic architectural style, lovely garden and multifaceted programming take visitors on a trip back in time. Entertainment includes live performances of Simcheong, an age-old Korean healing story told with music and dance, performed in a 128-seat theater. Or treat guests to Korean royal culinary delights during lavish banquets, and sign up for cooking classes and taekwondo lessons. Hanbok wearing — which allows guests to don traditional Korean garb — makes another popular activity at Korea House as well as at K-Style Hub, a cultural venue also offering Korean culinary classes.

Groups interested in traditional Korean stage performances might also consider hosting a private event at the Jeongdong Theater, a 282-seat venue that stages a variety of plays and other performances.

Discover another worthwhile site for events infused with tradition and history at the National Museum of Korea, where the eye-catchingly modern building stands in contrast to an extensive collection of exhibits documenting thousands of years of Korean history. Groups can make use of an open plaza large enough to host up to 3,000 people, as well as two lecture halls that seat 416 and 200 attendees, respectively.

For a sky-high view of the city, groups head to places like N-Seoul Tower, a 774-foot communications and observation tower, and Lotte World Tower, which at 123 stories is the tallest building in South Korea. The skyscraper houses business offices as well as Lotte Hotel World, a 469-room property with nine banquet halls. Also in the tower is Signiel Seoul, a 235-room luxury hotel with five banquet halls. Events at either hotel are guaranteed to impress with stunning views.

Among the newest names in the local hotel scene, Park Hotel Yeongdeungpo marked the South Korea debut of Singapore-based Park Hotel Group when it opened in 2019. The 140-room property offers reasonable rates, meeting space and a central location in the city’s popular Yeongdeungpo district. No matter where groups stay in Seoul, they’re never far from impressive venues as well as unique experiences they won’t likely forget.

Set on the grounds of Gyeongbokgung Palace, the National Folk Museum of Korea houses more than 100,000 artifacts that recount the history of the Korean people, with an array of impressive exhibits depicting important eras from prehistoric times through various dynasties. Facilities at the noteworthy venue include three permanent exhibition areas, two special exhibition sites and a library.
mcst.go.kr/english

Namsangol Hanok Village, a collection of five restored traditional hanok buildings, allows meeting and event attendees to immerse themselves in the culture and traditions of the Joseon Dynasty, which ran from 1392 until 1910. The venue features a lovely garden as well as a theater, and groups can also arrange presentations on Korean culture, craft demonstrations and opportunities to wear the hanbok, traditional Korean formal attire.
hanokmaeul.or.kr