The Tiny Island Nation Goes Big for Conventions and Meetings

The city of Valletta was built to keep outsiders out. Its two natural harbors offer strategic shelter in the central Mediterranean between Italy and the coast of Africa. Any vessel arriving here is confronted by unwelcoming walls formidably constructed from blocks of golden limestone.

These defenses are not just for show. They bear the scars of innumerable attacks, up to and including World War II, when German and Italian forces laid siege to the island for two years, five months, one week and two days. For their bravery, the people of Malta were collectively awarded Britain’s George Cross, the highest award for civilian gallantry, now proudly emblazoned on the national flag.

In recent decades Malta has opened its gates to outsiders. With 300 days of sunshine and a wealth of beaches and historic attractions, tourism has become one of the island’s most important sectors, contributing 15 percent of the gross domestic product. The pandemic reduced that to close to zero, but as they have done so many times in the past, the Maltese weathered the storm and planned for the future.

Meetings, incentives, conventions and exhibitions will be central to the revival of Malta’s tourism industry. In April 2021 the government announced MICE organizers will receive a grant of $160 for every MICE participant they bring to the country.

In common with most of the world’s major cities, Malta has its fair share of modern, identikit conference venues. You know exactly what to expect, but the downside is you could be anywhere. That cannot be said of the flagship venue, the Mediterranean Conference Centre, housed in a 16th-century hospital built by the Knights of the Order of St. John.

Situated at the tip of Valletta’s main peninsula overlooking Grand Harbour, the building has been sensitively restored to preserve its historic ambience while also providing all the comforts and technology expected of a 21st-century venue. Ancient suits of armor line stone corridors, and the building’s stone staircases have been smoothed by centuries of use. La Vallette Hall, one of 17 MICE spaces, can accommodate up to 1,500 guests beneath a stone vaulted ceiling. Medieval-themed events make the most of the unique setting.

Of all the MCC’s varied spaces, from a theater to compact boardrooms, the most spectacular is Grand Harbour Terrace, an outdoor rooftop venue with breathtaking panoramic views. Events held here at sunset are especially memorable.

Malta’s largest current venue, the Malta Fairs & Conventions Centre, sits on a decommissioned air base in Ta’Qali, in the center of the island. The huge, tent-like structure, capable of holding up to 13,000 people, formerly served as a concert venue at Wembley in London.

Several of Malta’s high-end hotels have MICE facilities. The Westin Dragonara Resort, facing the sea at St. Julian’s, a town immediately along the coast from Valletta, recently underwent a $50 million refurbishment and offers 15 event rooms. A new Hard Rock Hotel at St. Julian’s, scheduled to open this year, will have 370 rooms; a spa; and 37,000 square feet of event space, instantly making it the largest convention center on the island. 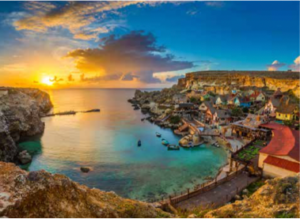 Unsurprisingly for a Mediterranean destination geared for tourism, Malta offers many attractions. At one end of the scale is Popeye Village. Once the set of a 1980 Robin Williams movie, it is now a popular theme park and available for corporate events and teambuilding activities. At the other end lies Valletta, with numerous attractions chronicling its history from 3000 B.C. (the Hal Saflieni Hypogeum, a magnificent subterranean archaeological site) to World War II (the Lascaris War Rooms, an underground complex which served as headquarters for the defense of the island). Other sites include the stunning 16th-century St. John’s Co-Cathedral, the magnificent Grandmaster’s Palace (which contains the office of the president of Malta) and the new City Gate designed by superstar architect Renzo Piano.

Twice a day, at midday and 4 p.m., six canons fire a salute from the city walls toward Grand Harbour. Best witnessed from Upper Barrakka Gardens, it provides a deafening reminder of this tiny nation’s ability to defend itself. As the smoke clears, you appreciate the privilege — as a visitor — of being behind the guns, looking out.

UNIQUE VENUES
Once you have thoroughly explored the island of Malta, you haven’t quite finished. To the northwest lies a whole other island, Gozo. Accessible every 45 minutes by ferry and much more rural than the main Maltese island, its rocky landscape has been farmed since 5000 B.C.

In 2020 the Maltese government launched the “MICE in Gozo” initiative to upgrade facilities on the island. Sites to benefit include the Cittadella, the remarkable 14th-century citadel that dominates the northern side of Gozo’s charming capital, Victoria. It’s especially suited to outdoor evening events.

Gozo’s premier hotel is Kempinski San Lawrenz, set in the countryside among palm trees. The hotel’s four venues accommodate groups of 15 to 400.