Royal Caribbean International, one of the world’s three largest cruise operators, is a mainstream rather than premium line. Many of its passengers are families with children, younger couples and first-time cruisers who relish shows, sun sports, shopping and spas. Accordingly, Royal Caribbean delivers dream vacations by outfitting its megaships — full-scale resorts that happen to float — with shopping malls, water parks and entertainment zones for kids. This makes for what many passengers, especially Americans, consider the ultimate vacation at sea. While Royal Caribbean spans the globe, Caribbean vacations are its forte and megaships its signature. In 2009, Royal Caribbean International launched the world’s largest cruise ship, the 5,408-passenger Oasis of the Seas. The next year, it outdid itself with the debut of a super vessel some two inches longer, Allure of the Seas. This year, the 5,497-passenger Harmony of the Seas surpassed its two sisters to climb to the top of the length and passenger charts. In fact, this newest over-the-top sea-going resort epitomizes much of what Royal Caribbean offers. 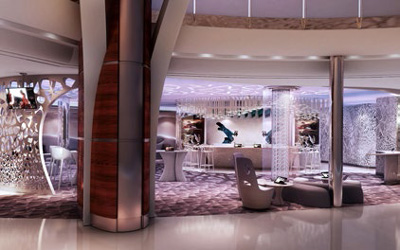 Equipped with 18 decks and two dozen passenger elevators, Harmony of the Seas consists of seven “neighborhoods.” A stroll through the Boardwalk neighborhood, a re-imagined Coney Island, turns up a grand carousel, a rock-climbing wall, troupes of aquatic performers and even a Starbucks. The Royal Promenade showcases a Bionic Bar where robots mix and serve the drinks. At the center of the ship lies Central Park, an outdoor space with garden paths and alfresco dining. After dark, the ship’s Entertainment Palace comes alive with a comedy club, a jazz club and, in the 1,380-guest Royal Theater, a Broadway production of Grease. A Youth Zone provides playground diversions for kids, from infants to teenagers, while a Pool and Sports Zone provides everything a land resort does, from a zipline and surf simulator to basketball, volleyball and miniature golf. Harmony of the Seas’ recreational hallmark is the Ultimate Abyss, a waterslide 10 decks high, the tallest at sea. For passengers requiring quieter zones, Harmony of the Seas also provides an adults-only solarium three decks high, as well as a range of top specialty restaurants and luxury suites with concierge services, private decks, multiple bedrooms and lofts. Royal Caribbean’s bread and butter across its entire 23-vessel fleet, however, remains the delivery of a sun-splashed vacation at sea with all the latest bells and whistles, a top choice for passengers with active families who would rather hit the decks running than stretch out on a lounge chair.