TRAVEL IS BECOMING more associated with pop culture, with movie buffs adventuring to their favorite film sites around the world. While some say pop culture and travel don’t have much in common, engaging in travel and television and film offers a way to explore the world and its many cultures. When entered into with an open mind, we allow ourselves to imagine our lives as something other than they are.

Given worldwide interest in extensive media coverage, it’s relatively easy to become familiar with celebrities, stars, musicians and actors. Special-interest tourism — in which travelers visit a particular destination or region to pursue interests like culture, nature, health, sports, wine or festivals — is growing increasingly popular, with a particular market segment emerging that revolves around pop culture … primarily travel to destinations connected to TV programs and movies. After all, what’s better than seeing places on screen come to life?

With pop culture-inspired travel at an all-time high, travelers journey to new places in search of backdrops for a lavishly produced illusion — a location dressed up as something it isn’t. Tourists experience the illusion for themselves when the location dresses itself up all over again. While movies come from a real place, often film locations don’t look like they do in the film. 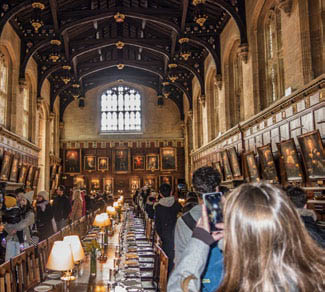 Tourists flock to the Great Hall of Christ Church College, University of Oxford, made famous in the Harry Potter movies © MEINZAHN
| DREAMSTIME

The world witnessed the power of pop culture to increase tourism in destinations from Hollywood to Georgia, from New Zealand to Ireland and the United Kingdom. In the past several years, movies from the Twilight, The Hunger Games and Harry Potter franchises and TV shows like The Walking Dead and Game of Thrones inspired visitors to travel to landscapes they saw on screen.

The trend now goes beyond visiting and touring Hollywood-area film studios. Of the top 100 highest-grossing feature films released in 2016, only 12 were primarily shot in California while the rest of the big-budget movies were shot in Georgia. The U.S. state led the 2016 domestic releases with 17 big productions, followed by the United Kingdom with 16 and Canada with 13. The three locations outperformed California in this particular industry segment because of their production incentive programs. Georgia’s lead in the industry shows the strong impact of incentives on driving the largest feature films to locations outside of California, proving Los Angeles isn’t as necessary in the entertainment industry as it once was. With up to 30 percent uncapped refundable tax credits for in-state production spending, Georgia lured major motion pictures like The Hunger Games: Catching Fire, Twilight sequels, Forrest Gump, Remember the Titans and many more in recent years.

Even though California sees more production than several locations combined when factoring in smallerbudget films and TV, the increase of production in Georgia and other locations creates ancillary effects like tourism — drawing tourists in search of the locations from their favorite screenplays.

Different destinations use different strategies to enchant tourists searching for locations used as sets, actively integrating their own heritage and culture with the pop culture phenomenon. From self-guided walking tours to guided tours around the state and even luxury hotels offering fashion and art exhibits to new movie openings, get ready to make your way around Atlanta and surrounding small-town Georgia to sniff out traces of Rick Grimes’ crew of survivors and the voracious zombies from the wildly popular AMC series The Walking Dead. 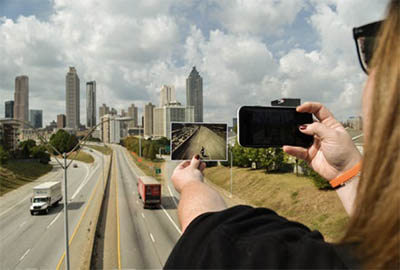 Between the ruthless outlaws and the omnipresent zombies, it may be tough to last long in the world of The Walking Dead. If viewers learned anything from the eight seasons of the show, it’s that Rick makes debatable decisions; the writers don’t fear killing off popular characters; and in case you’re under attack by zombies, you know how to fight them off. Since the action mostly takes place in Georgia and is shot almost entirely in and around the state, visiting the filming locations proves quite easy.

Many fans plan zombie-centered getaways into Atlanta, but guides on Big Zombie tours are a big help since they’ve worked as zombie extras on the show. Atlanta Movie Tours offers visitors hour-long tours to locations from Season 1 and beyond, visiting the hospital where it all started, walking through the Goat Farm to see firsthand where the Vatos held camp and even taking selfies from the Jackson Street Bridge.

Big Zombie Tour Part 1 starts fans from the beginning in Atlanta while Big Zombie Tour Part 2 continues into “Woodbury,” the small town of Senoia, Ga., and through favorite memories of Seasons 2–5. Senoia is a quaint town with big zombie business. Check in for tours at the Woodbury Shoppe, a recently renovated and expanded The Walking Dead emporium. The tours don’t stop there. Big Zombie Tour Part 3 covers all of the hot spots in Season 6, venturing back in time to memorable locations. 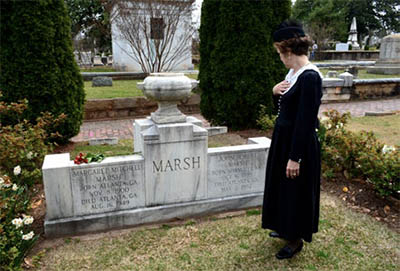 Other tours include the Castleberry Hill Backlot Walking Tour, home to hundreds of movie locations, and The Best of Atlanta Tour, which includes sites of more than 1,200 movies and TV shows filmed in Atlanta, such as Captain America: Civil War, Ride Along, Stranger Things, The Hunger Games, The Walking Dead, The Fast and the Furious, The Blind Side, Anchorman 2, Baby Driver and The Real Housewives of Atlanta. Walk into the basement where Samara was held in Rings, pass the funeral scene of The Fast and the Furious set and see the famous bar from Ride Along and Triple 9. The Hero Tour allows visitors to experience the world of heroes and superheroes firsthand as the city pairs up with Marvel Universe. Fans of The Hunger Games can step into the world of Katniss, Peeta and President Snow on a three-hour Victory Tour. 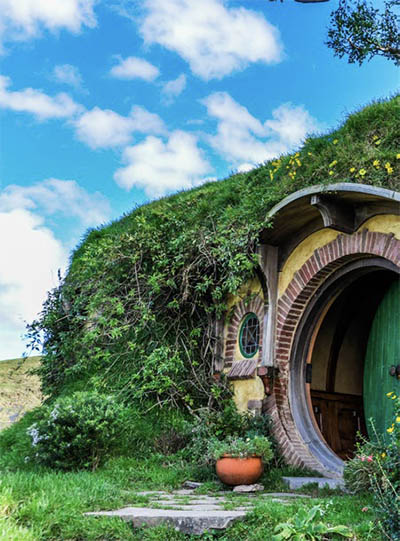 Tourism in New Zealand skyrocketed with the filming of The Lord of the Rings. Since the release of The Hobbit, the country sees more visitors inspired by the films. Swain Destinations released three Hobbit tours, including a two-hour guided tour to the Hobbiton movie set in Rotorua, with film locations in Wellington, Queenstown and other parts of the country.

Albuquerque, N.M., experienced a surge in tourism due to another one of AMC’s critically acclaimed series, Breaking Bad. Although the show is over, ABQ Tours takes fans to experience familiar sites, while the Biking Bad Tour offers an intimate and interactive experience of taking visitors into the streets in search of their next “fix” of key scenes and locations. Albuquerque also offers unique hotel deals for guests.

Fans of the epic show Game of Thrones recognize landscapes in Northern Ireland as they trek into old-growth forests, along wild sea cliffs, into caves and among crumbling medieval ruins. Visit Cushendun Caves, where Melisandre gave birth to a dark spirit; Renly’s camp in the Stormlands; or the Iron Islands beach where Theon dedicated his faith to the Drowned God.

Where will your new favorite movie take you next?