STRICTLY SPEAKING, THE PLACE name “Okinawa” designates three different locations. The prefecture Okinawa, the southern part of the Ryukyu archipelago, consists of a string of 160 small islands running south from Kyushu toward Taiwan. Okinawa is also the name of the largest, most prominent of those Ryukyu islands as well as the name of its second-largest metropolitan area, Okinawa City. But visitors to Okinawa tend to mean they’re headed to Naha, the island’s ancient and current capital. Located on the west coast of the island, with a population of 200,000, the center of politics, economy and culture is considered the “heart of Okinawa.”

The second-oldest human remains in Japan were discovered in this area that evolved through a period of Chinese influence into the headquarters of the local Ryukyu Kingdom and, ultimately, a prosperous port. Eventually overtaken by the Japanese, the island’s strategic location made it the site of vicious battles during World War II — the “typhoon of steel” — until it was occupied by American forces, which still maintain two large bases north of Naha.

Razed to the ground after the war, Naha has been rebuilt with its modern streets tracing ruts created by bulldozers that cleared the postwar rubble. Three-quarters of a century after the war’s destruction, this bustling city features modern concrete high-rises intermingled with shops, government buildings and historic sites. An efficient monorail runs from the airport in the southwest seven miles northeast to Shurijo, the ancient head of government. Kokusai Street, Naha’s “Miracle Mile,” bisects the Central Business District, winding past restaurants, souvenir shops and fashion boutiques. 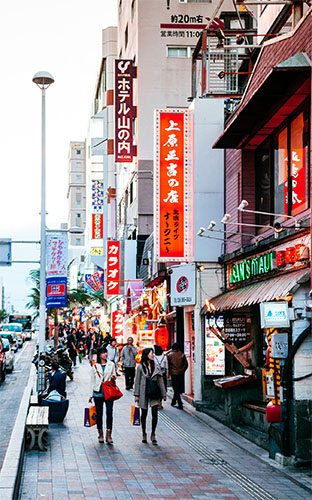 For business travelers, some of the most appealing lodgings combine resort appeal with professional facilities. Calling itself a “cosmopolitan hideaway” as well as “a premiere MICE destination,” the Naha Terrace City Resort, a white high-rise accented by stacked balconies, is a 20-minute/$10 taxi ride from the airport in the emerging Shintoshin urban planning district. Highlighted by Adan Hall, with theater-style seating for up to 450, the hotel’s flexible function facilities provide resources for hosting events from product launches to corporate conferences. The Nirai Kanai cocktail, featuring the local awamori liquor, and other fancy frozen beverages are served in the Maroad living room lounge beside a luxuriant garden pool and in the cozy, wood-paneled November library bar. The formal Fanuan dining room features fusion Japanese-French cuisine. A fleet of cars is at the service of guests, and a house rule requires all guests to cover body tattoos.

Located in front of a pier near the port “where the blessing of the ocean meets the city,” the Kariyushi Urban Resort Naha is similarly suited for both business and leisure. Healthy anti-aging menus are served at Danryumansai, evolving through the day from an early morning breakfast buffet to a tea lounge and bar and, finally, featuring French and Eastern dinners.

Another recommendation for breakfast meetings is the Hotel Aqua Citta’s buffet, cooked with an Italian touch and served in front of floor-to-ceiling windows. Newly opened in October 2017, the white block high-rise lies near the Tomari Port with easy access to the Miebashi monorail stop. Beverages embellished with blossoms and umbrellas are served beside the rooftop pool overlooking city views, and additional full-sized umbrella service is provided on the city’s frequent rainy days.

Among more conventional urban options, the JR Kyushu Hotel Blossom Naha in the heart of downtown is a landmark of Okinawan style and comfort, blending culture and modern design in a resort inspired by the natural sea and sky. The Blossom’s overwhelming dining options include a 60-dish buffet breakfast with six types of bread, breakfast curry and a salad bar with seven choices of homemade dressings. Thick-cut Australian Wagyu porterhouse steak, aged for 21 days, and Black Angus beef are specialties of the 37 Steakhouse and Bar which includes a bar counter, a private dining room seating up to 12 guests and a 20-foot-high dining hall with 100 seats and a 200-inch screen and audio equipment for presentations.

Also outfitted with flexible function space, located midway between Kokusai and the renowned Tsuboya Yachimun district of pottery craft shops, the Hyatt Regency’s second floor accommodates up to 500 and provides a multilingual planning staff to help organize events. Breakfast and lunch feature seasonal ingredients in its Sakurazaka Restaurant, with snacks, teas and pastries available in The Lounge.

Two Hilton hotels offer meeting and conference facilities. The DoubleTree by Hilton Hotel Naha, conveniently located near the Okinawa Convention Bureau, Ryukyu Bank and Okinawa TV broadcasting station, provides nearly 500 square feet of space for meetings and special events. Five minutes from the city center by car (a $3–5 taxi ride), the atmospheric DoubleTree by Hilton Hotel Naha Shuri Castle sits near the city’s historic Shuri-jo UNESCO site. In addition to 10 meeting rooms and a ballroom for conferences, its Sky View Plaza can seat up to 200 guests.