BLUFF, AT THE SOUTHERN TIP of New Zealand’s South Island, represents either the end or the beginning. As hikers pose for photographs beneath a signpost pointing to all corners of the world, you can tell at a glance if they’re southbounders (weary but elated) or northbounders (apprehensive but eager). Here we are at one extreme of the Te Araroa Trail, the epic hiking route that spans the length of New Zealand. For those setting off from here, 1,864 miles of coastline, forests, bogs and mountains lie ahead.

This is not a walk in the park (though you’ll pass through many spectacular parks en route). Meticulous planning is required to ensure you have appropriate equipment, ample food supplies, sufficient funds and — for non-New Zealanders — a valid long-stay visa. The entire journey can take around six months (approximately three months to walk the length of each island, with a three-hour ferry crossing of the Cook Strait between the two). 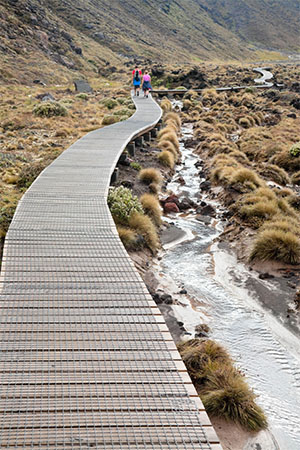 The trail is one of the world’s greatest longdistance hiking routes, though it was established relatively recently. Local walkers worked for more than three decades to link existing pathways and create new ones across public and private land. The full route officially opened in 2011 and instantly became a bucket-list fixture for international hikers.

To tackle the entire route at first attempt is a formidable undertaking. Amateur walkers are better off trying a short section or two before committing to the full adventure at a later date. Even in small doses, Te Araroa’s epic nature is readily apparent.

One of the most popular sections is the Tongariro Alpine Crossing on North Island, accessible from the coastal town of Whanganui. For fans of The Lord of the Rings movie trilogy, much of the landscape will be instantly familiar; this was the dangerous land of Mordor.

Even in reality, danger stirs beneath the surface and occasionally erupts. The route passes among a complex of active volcanoes, including Mount Ngauruhoe, which last blew its top in 1977, and Mount Ruapehu, which erupted in 2007 and continues to rumble fitfully. Access to the Tongariro route can be suspended due to volcanic activity.

Volcanoes often give rise to hot springs, and this region is no exception. After trekking the trail for a day or two, what better way to soothe your aching muscles than to soak outdoors in steaming-hot water? Tongariro Springs Boutique Suites, a short drive from the trail, offers luxury accommodations and two hot pools. You can arrange transfers to and from the trail in advance with a local family-run company, National Park Shuttles.

Another popular section of the Te Araroa threads around Queenstown, on South Island. One multiday option is the hike from the town of Wanaka to Queenstown. The route starts on the shore of Lake Wanaka before ascending and descending through mountain country. The total distance is 56 miles, for which you should allow 4–5 days. Accommodation is in mountain huts along the way.

Heading southbound, you are rewarded at the end by arrival in Queenstown, New Zealand’s adventure tourism hub. There’s no shortage of options for pampering your tired body when you reach this scenic lakeshore town. One residential wellness option is The Spa at Nugget Point, with its luxurious guestrooms and spa offering a range of massages and other treatments.

By now you’ll have discovered New Zealand is a hiking paradise. The trails are well-maintained and well-signposted. Locally available maps are detailed, and useful apps keep you updated about weather conditions or route changes. You’ll find plenty of huts along the trail and more comfortable accommodation in towns and villages. New Zealand’s wildlife is predominantly of the feathered variety, so there are no bears, big cats or snakes to worry about.

Then again, there was good reason for the hobbits’ quest in The Lord of the Rings to be filmed against this backdrop. New Zealand’s scenery exists on a cinematic scale. The mountains, especially on South Island, are formidable (the trail wends between them), and the moss-draped forests are otherworldly.

If there’s a down side, it’s that the Te Araroa Trail is becoming too popular. If you choose to tackle the whole route, you’ll meet plenty of other hikers ticking it off their own bucket lists. The camaraderie is mostly welcome, especially if you run into problems. But in places the trail can feel overcrowded.

Soon enough, though, you’ll be on the next remote stretch with only your own sounds for company, making this phenomenal journey one step at a time.

Auckland International Airport (AKL) is the entry point for passengers from the United States. Bay of Islands Airport (KKE) is the closest fly-in point for Cape Reinga, the northern terminus of the Te Araroa Trail. The onward journey by road from KKE to the Cape takes 2–3 hours. Invercargill Airport (IVC) offers access to the southern terminus, Bluff, a 30-minute drive away.