YOU CAN ALWAYS EXPECT the unexpected from golf architects Pete and Alice Dye and their boots-on-the-ground co-conspirator, Tim Liddy. In that respect, the design team and Maggie Hardy Magerko, president, Nemacolin Woodlands Resort, are kindred spirits — and Magerko does not hesitate to finance her free-spirited imagination if it is for the good of the resort.

Knowing this, I eagerly awaited the opening of the second Dye course at the resort, a 2,000-acre luxury enclave in the Laurel Highlands of Pennsylvania. I was there in 1995 for the debut of the Dyedesigned 7,526-yard Mystic Rock, a stunning layout routed through boulder-strewn terrain that would have reduced most designers to tears. It’s one of my favorites, though it always humbles me. The USGA rating/slope of 77/149 says a lot, along with the fact it is a former PGA Tour venue (the 2003–2006 84 Lumber Classic).

At the July 2017 opening of Shepherd’s Rock, my loyalty wavered. A 7,151-yard par 72 with a rating/slope of 74.7/138, the new course is a joyride twisting through meadows and forests, skirting lakes and wetlands, revealing distant mountain views at many turns. It’s pastoral, reminiscent of the British Isles, with waving grasses, rock walls, split-rail fences and herds of grazing sheep. And it’s great fun, with touches of whimsy such as the stylized statues of sheep scattered throughout the course. The sheep and statuary, like the luxurious comfort stations, are among Magerko’s touches.

The bunkers — 149 deep sand traps often backed by mounds — are no laughing matter, but Nemacolin’s director of golf Mike Jones points out they are, “positioned to indicate the best route and give you choices.”

One great feature of the layout is the “infinity greens,” which seem poised on the edge of the unknown. Pete Dye eschews backgrounds on most greens to showcase the setting, drawing the eye to distant views. The result is visually pleasing, says Liddy, but also “plays with your depth perception.” I can attest to that!

HOLE 1 | 590 yards, par 5
Shepherd’s Rock opens with an eyecatching but intimidating par 5. The fairway rises and banks left around a nest of pot bunkers bordered by tall grasses. On the second shot the landing area shrinks to a passage between mounds and bunkers on the right and a drop-off on the left. The approach to the front-sloping green is open, but deep bunkers defend each side.

HOLE 4 | 619 yards, par 5
Did I mention the course is heavily bunkered? The view from the tee is a gaggle of grassy dunes with sand traps at their feet set into the elbow of a dogleg right. It’s an effective deterrent to cutting the corner. The mounding continues up the center of the fairway. If you’ve played the left side to avoid trouble, there’s a rude awakening at the elevated green, where a massive bunker lined with railroad ties protects the approach from that side. 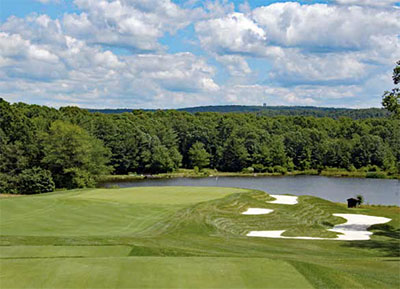 HOLE 5 | 214 yards, par 3
The first par 3 is a beautiful example of an infinity green. Jones told me it was originally in a low-lying area, level with the lake. Raising the green blocked the view of a small irrigation building and the tees for the next hole — and made the shot visually intimidating. From the tee, it looks as if the lake is right behind the green, but it’s actually 50 yards away. The tiered putting surface slopes to the front and drops on the right side to two levels of bunkers.

HOLE 10 | 388 yards, par 4
Just when you’re getting used to open meadows and grazing sheep, the course ducks into the forest and changes character. A grassy pit lies in the middle of this fairway, which pitches right toward woods and deep rough. The depression seldom comes into play, but the incline of the fairway does. Even if your drive lands high on the left side of the fairway it can bounce down to a nasty patch of wetlands beneath a rock wall. Or it can trickle down to the front of the green, avoiding the drop-offs on the right and back sides of the putting surface.

HOLE 18 | 455 yards, par 4
Originally, Hole 9 was slated to be the finishing hole, and it would have been a good one, rising as it does to a 50-mile view of the mountains. What is now 18 was a troublesome hole, according to Liddy. When the designer asked for a dramatic (and expensive) redo, Magerko and her father, Joe Hardy, agreed. The result is a spectacular hole that runs alongside a lake and ends at a green backed by a waterfall.