By late spring, however, Ottawa blossoms into a lush, green paradise. The large sugar maples are verdant again, lindens show their fragrant flowers, honey locusts line the river banks, and 60-foot Turkish hazel trees provide shade during Ontario’s ethereal summer. Brightly colored sailboats tack with the breezes along the Ottawa River, and dairy cows graze on green pastures on many of the 1,000 farms within the city limits. Ottawa boasts more farms within its borders than any other city in Canada, plus 20 acres of green space for every 1,000 residents — more than most cities in the world — a reminder that, although the city is home to the country’s most important political and cultural institutions, it often feels like any quiet, rural town in North America, or France, if you include its French-speaking suburbs in Québec just across the Ottawa River.

For MICE planners, the city and its meeting venues are as sustainable and energy-efficient as possible. Energy Ottawa, an affiliate of Hydro Ottawa, is installing solar panels on eight municipal rooftops, including city recreational centers and bus garages, which will feed electricity into the local power grid. “We understand how important green energy solutions are to our customers, our city and province,” said Greg Clarke, chief electricity generation officer, Energy Ottawa.

When the glass-faced Shaw Centre, the city’s largest convention venue, opened in 2011, it offered businesses, visitors and staff an exceptional ecofriendly meeting facility. The contractors and architects who redesigned the new building, the former Ottawa Convention Centre, had to meet environmental sustainability requirements.

The Shaw saves 225,000 gallons of water each year by harvesting and storing rainwater in a cistern below the building before pumping it back for gray water needs, including landscaping irrigation. The Wall of Three Rivers, a large artwork in the building, consists of reclaimed logs that sank to the bottom of the Ottawa River during the logging era. The building earned LEED Gold certification by the Canada Green Building Council.

“Clients want to understand the true cost of their event, at a very detailed level,” said Mathieu Murphy, director of facilities, Shaw Centre. “Our guests and suppliers are more eco-conscious than ever; that encourages us to continually refine our operations, increasing our waste diversion and using automation technology to reduce our use of electricity, heating and cooling.”

The 496-room Westin Ottawa, physically connected to the Shaw Centre and the Rideau Centre Mall via an indoor walkway, offers planners 44,000 square feet of meeting space; 27 tech-centric meeting rooms; a 16,500-square-foot Grand Ballroom; and another ballroom with windows overlooking Rideau Canal and Parliament. The Hotel Association of Canada voted the property the 2013 Energy & Environment Award winner. 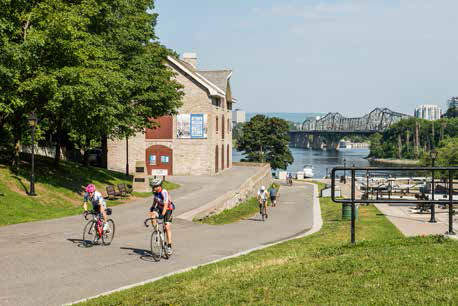 Other large downtown meeting hotels include the 427-room Fairmont Château Laurier, opened in 1912 and located across the street from the Shaw Centre. Offering 36,000 square feet of meeting space and 16 meeting rooms, it is expanding its footprint overlooking the Rideau Canal. The 481-room Ottawa Marriott provides 26 meeting rooms; 36,162 square feet of meeting space; and four concierge levels.

Many large national museums can host private dinners, conferences and incentive events, such as the Canadian Museum of History, the Canada Agriculture and Food Museum, the Science & Technology Museum, the Canadian Aviation and Space Museum and the National Gallery of Canada.

The $28.7 million Ottawa Art Gallery Expansion and Arts Court Redevelopment project is part of the ongoing revitalization of Ottawa’s downtown. The ArtHaus Residences at Arts Court will be the first condominium project in North America to include a deluxe hotel (Hôtel Le Germain), art gallery and theater space. When completed this fall, the OAG, with 80,000 square feet on five floors, will offer a great cultural venue for city residents and off-site events.

Ottawa’s transportation master plan for 21 miles of new light rail rapid transit and 19 stations is on target to be fully operational by 2023. The Confederation line’s downtown portion will be mostly completed this year, the 150th anniversary of Canada’s Confederation. The entire transit project will cost about $3.7 billion, the largest infrastructure project in the history of the city.

MICE venues in the Outaouais region, just across the Ottawa River, include Nordik Spa-Nature, the largest spa in North America, and Fairmont Le Château Montebello. The spa boasts a green commitment with the mantra, “What is good for the body should be good for nature.” The spa accommodates groups, and overnight guests can stay in cabins or lodges. The Fairmont, built in 1930 of red cedar logs with an iconic six-sided stone fireplace in the lobby, offers 211 guestrooms, a beautiful golf course and the Eco-Meet green conference planning option that lessens the environmental impact of meetings through reduced resource consumption.