A PRISTINE CITY OF BROAD boulevards where monumental government buildings intermingle with charming restored shops and churches. An urban landscape where welcoming residents stroll along meandering river banks, pausing at picturesque bars and cafés for borscht and sips of local vodka. A metropolis scattered with museums; concert halls; parks; and two grand, rounded edifices housing the Bolshoi Ballet and the Circus. All these attributes add up to modern Minsk, and the capital of the former Soviet republic of Belarus perches on the verge of emerging as a first-class site for visitors.

The current stability brings relief to a country repeatedly ravaged by war. A buffer state situated geographically at the center of the European continent, it served as a constant battleground first resisting Mongol and Tartar invaders, then enduring violent battles between opposing forces of the East and the West in the War of 1812 and both world wars. Occupied by the Nazis during World War II, violent clashes between the Germans and the encroaching Red Army flattened the city into a pile of rubble.

Emerging from the war as a Russian territory, Minsk, fourth-largest city in the former U.S.S.R. (after Moscow, St. Petersburg and Kyiv), was earmarked by Stalin to be a showcase of Russian achievement. Starting from scratch, planners lined broad roads with imposing structures and high-rise apartment blocks in the Stalinist Empire style. Historic landmarks, faithfully rebuilt in antique styles, sometimes startle visitors who discover the Gothic-style castle they’re visiting is merely a few years old.

Owing to the legacy of Soviet oppression, Stalin’s name isn’t mentioned these days, but the structures he sponsored survive. Unlike the case of faded gloom in other regions of the former U.S.S.R., these are intact and maintained. Theatergoers linger in vast marble reception halls, shoppers purchase foods and fashions in the updated GUM department store, and browsers window-shop through glistening corridors of fancy new malls. You’ll even hear tourists from China exclaiming how clean they find the city. 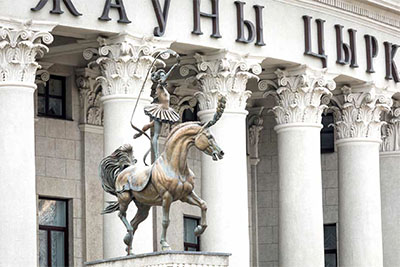 A new policy allows 30-day visa-free stays for visitors arriving and departing from the gleaming Minsk National Airport, a plus for business travelers and those attending corporate events. Deciphering place names posted in the Cyrillic alphabet can be frustrating, but the efficient metro system announces station stops in English. Museum captions include a line or two of translation, and tour operators provide English-language excursions. Although local currency is the Belarussian ruble (valued around 2.1 to the U.S. dollar), many prices are quoted in euros.

Visitors from overseas discover how far their currency stretches. In chain hotels with mobile check-in services and high-speed internet, rooms can run $50–150 per night. A token for the cross-town metro costs about a quarter, and taxis charge $20–25 for the 45-minute drive from the airport. Prices for seats at the opera and circus start at $2–4. Restaurants offer a full range of international cuisine, and it’s unusual to pay more than $30 or $35 for a multicourse meal with local beer, wine or vodka.

The MICE in Minsk Project, a public-private partnership, works with industry leaders to develop the city of Minsk and Belarus as a venue for conferences, congresses, forums, corporate events, team-building, incentives and festivals. War memorials liberally scattered throughout the country display the area’s troubled history, but Belarus is moving ahead. Outlying cranes and construction sites indicate Minsk’s ongoing expansion, not only in area but attitude, as visitors discover the attributes and appeal of its emergence.

Encompassing the Emir Casino, the ultramodern city hallmark, Hotel Belarus, features an overwhelming mélange of crystal, marble and chandeliers with a variety of meeting spaces on three floors, anchored by a business center fully equipped with computers, faxes and printers. An auditorium with tiered red velvet seats on the ground floor opens off the dazzling lobby where hors d’oeuvres can be laid out for receptions. The Panorama Restaurant on its renowned 22nd-floor Observation Deck can also host special events.
hotel-belarus.com

The classic Minsk Hotel, a bastion of fading glory, offers an Old-World contrast. Conveniently located square in the middle of the city (adjacent to a vast underground shopping mall and close to the metro), its cozy lobby bar is adorned with autographed photos of the notable film stars and commissars who’ve lounged on the beige leather sofas in the lobby. Guests can enjoy the hammam spa on the ground floor. The hotel offers a variety of meeting room and conference hall options to be rented by the hour.
hotelminsk.by