WADI RUM! Just the name sounds mysterious. Couple this with miles of golden-red-tinted sand stretching in every direction, camels, Bedouins, violent storms and fiery sunrises, and I’m beyond intrigued. For starters, I love deserts. There’s something about the sand’s surprises that makes me want to investigate further, and the vastness and deceptively uncomplicated landscape calms my soul.

So what is Wadi Rum? one might logically ask. A wadi is a valley, ravine or channel, dry except in the rainy season. The rum descriptor is guessed to have come from an Aramaic root meaning “high” or “elevated.” Also known as “The Valley of the Moon,” this 183,000-acre area of dramatic desert landscape in southern Jordan comprises a range of narrow gorges, natural bridges, towering cliffs, massive landslides, caverns and miles of shifting sand.

Petroglyphs and other archaeological remains attest to 12,000 years of human occupation and interaction with the environment. More recently, it was the place where Prince Faisal Bin Hussein and T.E. Lawrence (aka Lawrence of Arabia) based their headquarters during the Arab Revolt against the Ottomans in World War I. Much of the 1962 David Lean epic movie, Lawrence of Arabia, was shot at Wadi Rum, declared a UNESCO World Heritage site in 2011.

Today Wadi Rum is home to the Zalabia Bedouin who, shrewdly, figured the area would appeal to adventure travelers. They developed eco-adventure tourism into a profitable business, now their main source of income. The area proves one of Jordan’s important tourist destinations and attracts an increasing number of foreign travelers, particularly trekkers, climbers and those on camel and horse safaris.

Our group consisted of five photographers looking to come away with some amazing desert images. Our first stop was Captain’s Desert Camp, one of the Bedouin camps at Wadi Rum that caters to visitors. This became our home in the desert. About 5,000 Bedouins call Wadi Rum home, many living in traditional goat hair tents called beit al-sha’ar, translated literally as “house of hair.” We would be sleeping in similar tents.

The line of black-, white- and red-striped tents nestled up to sandstone outcroppings at Captain’s Camp shared a large common area. Richly colored goat hair rugs and blankets with geometric designs covered the floors, and grass matting served as walls.

As our hosts cooked our lunch in a pit, we all went out to watch it emerge from the makeshift underground oven. Then we sat down to a feast of succulent roasted vegetables and chicken and a full assortment of salads, plus hummus and pita bread, topped off with a cup of mint tea. Needing a little activity after all this food, we got into four-wheeldrive vehicles and took off across the desert. We clambered up sandstone outcroppings and watched as the sun set over the miles of undulating sand. 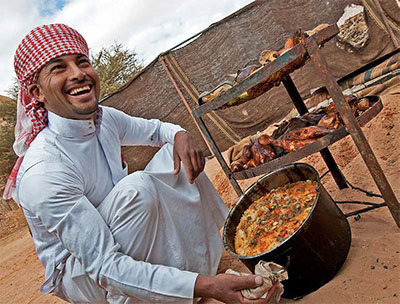 I find night in the desert a magical time, and it seemed even more magical at Wadi Rum, silent except for the sound of a gentle breeze, the tents silhouetted against a black sky full of twinkling, jewel-like stars.

Basic cot-like beds were piled high with blankets to keep out the cold. I thought twice before crawling out of my warm cocoon and heading for the toilet tent in the middle of the night.

Waking up to a rosy glow in the sky, I reluctantly abandoned my warm bed in favor of watching the sun rise. It was cold, with a stiff wind blowing, but hey, I was in Wadi Rum. I could get warm later.

After a hearty breakfast and more mint tea, we climbed into the bed of a well-worn 4×4 truck and headed out across the sand. It was neither a warm nor a smooth ride. Wrapping scarves around our heads and faces and holding on for dear life, we crossed miles of sand with a Jordanian Mario Andretti at the wheel.

When we spotted camels and drivers we all yelled to Mario to stop and let us out. With the help of our Jordanian guide, we convinced a camel driver with his grandson in tow to pose for a few photos as he led his camels across the sand. We made another stop to check out rock faces covered in petroglyphs and then scrambled around the remains of a building where T.E. Lawrence once stayed.

Our next stop was our ultimate destination, Jabal Umm Fruth Rock Bridge. One of several natural arches in the Wadi Rum, it features impressive drops on both sides, and a five-minute climb gets you to the top. A young Jordanian boy walked across the surface while we photographed, and our accommodating guide posed in traditional garb on the top of the bridge. By late afternoon we were sitting in a local’s house drinking cups of the ever-present mint tea before we headed back to the camp.

Short but memorable, my trip to Wadi Rum exceeded my expectations. Ancient history seemed infused into the barren desert landscape, kicking my senses into overdrive. It is a place I’m not likely to forget.

Though Wadi Rum is a year-round destination, March–May and September–November prove the most temperate months for full-day explorations. To get to Wadi Rum, a taxi ride from Aqaba takes about an hour. Buses also connect from other locations in Jordan. The best way to see the area, especially if you have a limited amount of time, is in a 4×4 vehicle with a local guide. Other choices are on foot or by camel.

Options for spending the night in Wadi Rum vary from luxury glamping to sleeping bags in the open air. Bedouin-style camping, like that at Captain’s Camp, typically offers tent cabins housing two to six people and shared bathroom facilities with solarheated water. The communal area normally includes a kitchen, indoor dining area and outdoor lounge space around a fire. You can also stay with a Bedouin host family for a night in their beit al-sha’ar (a tent made from strips of goat hair or sheep’s wool), or you can rough it with bivouac camping under the stars.