BEFORE WE START, we need to address the issue that overshadows every visit to Bangalore (officially known as Bengaluru).You’ll find yourself talking about it, worrying about it and, most of all, in it. Traffic. It’s the bane of the city’s life.

There are no quick fixes, and it’s getting worse. In 2016 the city’s average traffic speed was 12 mph; by 2017 it fell to 10 mph, the worst in India. Sometimes you’ll get a clear run and make good time, but the average results from the equal number of times you’ll grind along at walking pace, or not move at all.

You’ll encounter the worst bottleneck at Silk Board Junction, south of the central district, which, unfortunately, you must negotiate to and from Electronic City, Bangalore’s IT hub. A Metro rail link is due for completion in 2022, and a heli-taxi service has been proposed between Electronic City and the international airport (reducing to a few minutes the 15-mile journey which currently can take three hours or more). But for now, every appointment and every schedule comes with the proviso: traffic permitting. 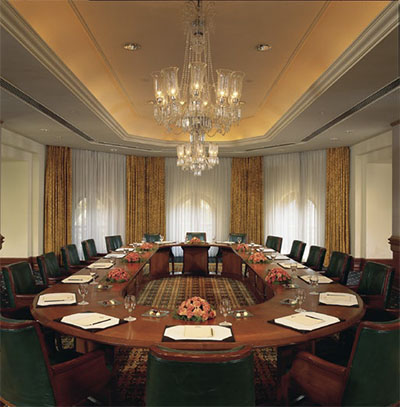 Turret Room at The Leela Palace © THE LEELA PALACE BENGALURU

The city’s premier MICE facility, Bangalore International Exhibition Centre lies northwest of downtown. It’s not entirely immune to traffic issues (allow 30–60 minutes to reach it from downtown); but once you’re at the 57-acre site, you’ll be in a bubble of efficiency. The four main exhibition halls offer flexible layouts and, in addition, nine conference halls feature capacity for meetings of between 20 and 1,400 people. A food court offers a choice of high-end restaurants and fast food (including Subway and Domino’s Pizza).

No international hotels exist in the immediate vicinity of BIEC. Most delegates opt to stay downtown, especially on or close to the city’s main axis, M.G. (Mahatma Gandhi) Road. Options include The Ritz-Carlton, which itself features a flexible range of meeting venues; The Oberoi, offering staff dedicated to planning corporate events; and the Golden Lotus Boutique Suites, with palatial, colorful rooms ideal for respite between meetings and the hurly-burly of the city streets.

Although Electronic City is Bangalore’s established IT hub, the formerly sleepy district of Whitefield, east of downtown, emerged as a rival in the past two decades, centered on the International Tech Park campus, housing numerous multinationals. With its own shopping malls and leisure facilities, Whitefield evolved into a city-within-a-city. One of the best accommodation options here is Vivanta by Taj – Whitefield (not to be confused with two other Vivanta by Taj hotels in Bangalore). With its futuristic architecture, the hotel represents Bangalore’s high-tech aspirations.

In Electronic City itself, The Oterra Hotel is the 5-star choice. Event options here include a grand ballroom with capacity for 1,200; a poolside venue accommodating up to 70 people; a 40,000-square-foot lawn for garden events; and a range of boardrooms.

Although Bangalore boasts a long and proud history, evidenced in the downtown British colonial architecture and many ruins from older periods, it lacks the worldclass attractions found in other major Indian cities. A daytrip to Mysore (officially Mysuru) provides a feasible MICE option. Situated 91 miles southwest of Bangalore, it features a wealth of must-sees.

One of the must-do Bangalore activities is attendance at a cricket match at the 40,000-capacity M Chinnaswamy Stadium. The stadium is one of the hotbeds of Indian cricket, and being part of the crowd proves an unforgettable experience. You can mix in with the locals in the bleachers or, for a more refined experience, opt for the corporate stand. For a whole day or just an evening, the traffic woes will seem distant.

Palatial is the word: It’s a palace. Throughout India you’ll find many former residences of local maharajahs converted into opulent hotels. The Leela Palace Bengaluru is a little different. It’s not an old converted palace but a new one built from scratch. Architecturally inspired by the Palace of Mysore, the foundations were laid in 1997, and the hotel opened in 2001. You wouldn’t know it on first impression. With its marble columns, pink sandstone walls and dome-topped towers, it appears to be straight out of a fairy tale.

For its first few years, The Leela was one of the most convenient addresses in Bangalore, located just five minutes from the airport and within easy reach of downtown. The property lost that advantage when the airport translocated to the north of the city in 2008; it’s now around an hour’s drive from the hotel (or much longer if the traffic is against you). The Leela remains ideally placed for the Embassy GolfLinks course, however, within walking distance.

Chicago on the Rise