Love Among the Ruins

WANDERING THE TWISTING STREETS and lanes of Athens, it isn’t difficult for the modern visitor — even while dodging buses — to get a sense of what so enthralled nobleman and Romantic poet Lord Byron about this singular destination, nor why it’s an ideal romantic destination with your favorite cotraveler. Views of the Acropolis floating in sunshine and moonlight above the city and long days spent among the crumbling columns and temples inspired Byron to pen a wealth of love poems and works exploring the concept of beauty.

In some cities, you have to look below the surface clutter to get a true sense of the essence. In Athens, it’s necessary to keep your gaze focused — like Byron’s — upward, pointed at the Acropolis, positioned like a crown on the head of a seething, wild metropolis. The collection of spaces that make up the Acropolis complex includes the Theatre of Dionysus, multiple sanctuaries and dreamy temples such as the Altar of Athena in the Temple of Athena Nike.

Architecturally interrupted by raids, wars, invasions and periodic indifference, the Temple of Zeus at the center of Athens was built in episodic stages, taking more than 600 years to complete. Today, 16 columns remain, though one lies supine upon the ground, having long ago given up its struggle with either gravity or fate.

Until 2003 the city sidewalks were paved with marble. Most have been replaced with surfaces less slippery during rainy days, while other restoration projects include select areas of the Acropolis, including the columns of the Parthenon and the Temple of Athena Nike. 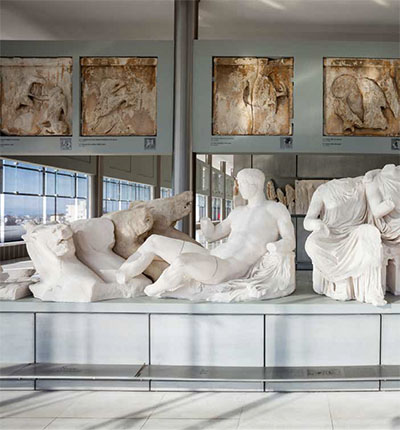 The Acropolis Museum makes an ideal place to get your bearings through an overview of the site and its various structures while viewing an impressive multitude of artifacts uncovered during excavations and restorations. Constructed above an excavation point, sections of the floor are transparent, providing both a view and context. The permanent exhibition includes the Archaic Acropolis Gallery, where stunning marble sculptures of figures and horses rise from stone plinths and pedestals.

In the third-floor Parthenon Gallery, the local politics of ancient Greece are explained, as are the financial details concerning the building of the statue of Athena Parthenos and the construction of the Parthenon itself. Another gallery is devoted to the massive Propylaia, which served as the entrance to the Acropolis, along with the temple of Athena Nike and the Erechtheion, which acted as a multipurpose temple to Athena and assorted other heroes, goddesses and gods. Easily identifiable by the female figures that serve as columns holding up the roof, the Erechtheion is surrounded by legends. It’s said to be erected upon the site where a battle took place between the god Poseidon and the goddess Athena, fighting over which of them had the right to name the city. 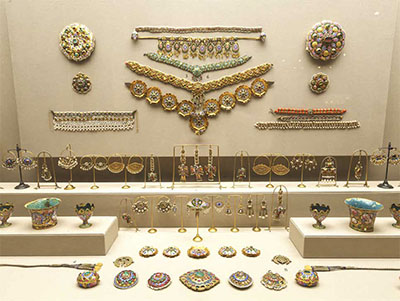 Jewelry on display at the Benaki Museum © MILAN GONDA – DREAMSTIME.COM

There’s more than just the once-lofty citadel to see, of course. Too often overlooked, the Benaki Museum has a staggering collection of art divided into exhibitions focused on Byzantine, Chinese, Islamic, Coptic and pre-Columbian art. There’s also an extensive library and fascinating displays that include toys and games. The collection of prehistoric, ancient Greek and Roman art offers displays of statuary, jewelry and lovely friezes.

Settling in to its new address within the refurbished FIX Brewery on Syngrou Avenue, The National Museum of Contemporary Art proves well worth a half-day visit. The museum’s collection includes seminal works by Greek and world artists including Emily Jacir, Stephen Antonakos and Nikos Kessanlis. Temporary exhibits share the space with a robust schedule of performances, lectures and events.

Close by lies the Museum of Cycladic Art, founded in 1986 from a private collection of Aegean and Cypriot artifacts. You can easily enjoy a visit to the small museum in a few hours, right before you head off to lunch in Syntagma Square. Cafés and numerous historic sites surround this fountained plaza, a destination unto itself. The city’s central square, it deserves a visit in order to just sit in the sunshine with a glass of fragrant ouzo or powerful tsipouro and watch today’s Athenians go about their business among throngs of visitors.

From here, one can easily walk to the Plaka, the Arch of Hadrian, the Theatre of Dionysus and the Temple of Olympian Zeus. What remains of Hadrian’s Library is also just a stroll away. In a long-ago letter to his sister, Byron wrote, “If I am a poet the air of Greece has made me one.” Perhaps he sat upon one of the library’s crumbling walls, ruminating on love and beauty before retiring to his accommodations at the Capuchin monastery at the foot of the Acropolis.

In his 1810 poem “Maid of Athens,” the poet wrote, “Athens holds my heart and soul.” Though he eventually left Athens, Byron remained in Greece, dying in the spring of 1824. Somehow, it isn’t all that difficult to imagine him still wandering through the spaces that served as the inspiration for so many of his best-loved works, his flamboyance casting color and vibrancy among the shadows of the caving stones.

Driving in Athens can be a challenge that detracts from the experience of visiting. With heavy traffic and a parking system that limits downtown access to alternating days based on odd- and evennumbered license plates, skip the rental car and opt for a driver — or brave the public transportation system, which includes trams, metro, buses and a suburban rail line. Though subject to strikes and generally crowded (be alert), the network will get you pretty much anywhere you want to go.

Athens International Airport Eleftherios Venizelos lies 12 miles east of the city, with direct access via Metro Line 3, Aghia Marina/Athens International Airport; and a rail line connecting to Athens Central Railway Station (Larissis Station) and the SKA Rail Center at Acharnes. KTEL operates an express bus service at the arrivals level between exits 2 and 3 opposite the airport hotel, with four bus routes to city center. Pick-up is located between exits 4 and 5. Taxis queue outside of the arrivals area between exits 2 and 3. Official taxis are yellow, with fixed fares into the city.

Where to Stay in Athens

THE MARGI This elegant Small Luxury Hotels of the World property is perfectly positioned between the beach and a pine forest. Rooms offer marina views, and relaxation options include sun beds and cabanas by the lagoon pool. 11 Litous, Vouliagmeri $$$$

ACROPOLIS MUSEUM RESTAURANT The views of the Acropolis may eclipse whatever you order, but this dining establishment is light years beyond a typical museum attraction restaurant, with regional and local dishes. 15 Dionysiou Areopagitou $$$$

ORIZONTES LYCABETTUS RESTAURANT Mediterranean fare created from Greek recipes is served on the city’s highest point in a romantic setting. Local ingredients include fish from the Aegean and lamb from nearby farms. 1 Aristippou, Lycabettus Hill $$$$

SPONDI Athens’ only double Michelin-starred dining establishment serves up French-inspired dishes in a stunning stone and brick setting. Located a short stroll from the Acropolis and the Panathenian Marble Stadium. 5 Pyrronos $$$$$