LONG BAY GOLF CLUB is a regular on our annual trip to Myrtle Beach, as it offers challenging features including long traps and a fierce 18th hole. And if you are a herpetologist, you will find the surrounding rough and nearly every pond a garden of creatures to study. On just about every par 3, we spotted five to six snakes swimming away from us as we approached, and much to my surprise, a gigantic rat snake rested right by the hole marker on 15.

Aside from the wildlife, this Jack Nicklaus “Golden Bear” Renowned Signature Design Course has some tricks for players at every turn. The secret to success at Long Bay, besides long pants, is to realize traps front many of the holes and, for the most part, there is room behind the greens. So be sure to take enough club, as you will likely land in the sand otherwise. In addition, the course can be a shot maker, as there are some narrow openings and hazards to avoid. In fact, some in my group refer to Long Bay as the “secondshot course,” where often you can drive away, but then you need to reel in your excitement and control the second shot to the green.

Nicklaus used bunkers to sculpt the course and added fairway moguls and mounding to create an appealing view from tee to green. Aerial shots of the fairways clearly show the difficulty caused by Nicklaus’ vision. For the round I paired with John Ecklund, IBM executive; Mike Donahue, FXExpress Publications, Inc. Advisory Board chairman; and my brother, Gerry Gallagher.

HOLE 1 | 408 yards, par 4
Sometimes guys like the Golden Bear ease you into a challenging course with a more straightforward hole. The first hole let us warm up to what was in store. From the tee box you can slam away to a wide fairway; and even if you venture too far left, your shot is still playable. The right side, on the other hand, is a woody disaster. All four proved the late night before had no effect on our swings, and we were safely spread out on the fairway, ready to attack the green. The green features one trap front center and one back center right. John hit a near-perfect shot to the center of the green, with the rest of us spraying and chipping on for bogie.

HOLE 2 | 568 yards, par 5
Even from the white tee markers the second hole measures some 524 yards, so this is a bear of a hole by the Golden Bear. But free of snakes, so that’s a plus! Two has a nasty waste bunker on the left that starts 130 yards from the green and then sneaks in front — this bunker caught Mike, and we thought we might never see him again. Although the fairways are somewhat generous, the woods can come into play. Gerry found this out in his drive when he decided to try John’s “big dog driver.” A line drive into the woods is not the best plan of play.

I was able to put together a nice drive: A beautiful three wood and an approach right of the green offered me a clean chip and then par. 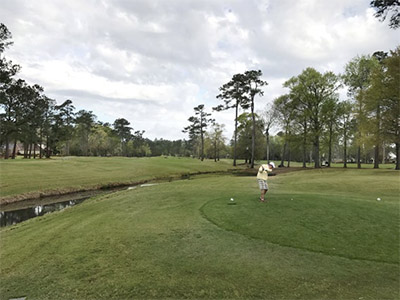 HOLE 6 | 394 yards, par 4
Gerry took to the tee; and although his game might not have been the most beautiful thing to watch, he sure dressed well in a yellow sweater and coordinating shorts. The sixth hole has a tight fairway landing area with an unfriendly tree hugging the right side, making the perfect turn to the fairway difficult. Add the three fairway bunkers down the left side and a two-tiered green and you can see why challenges beset the team. A trick shot from Mike skedaddled through the trees on the right and set him up for a great par on a tough hole. Maybe he was not as fashionable as Gerry, but as they say, there are no pictures on the scorecard.

HOLE 13 | 156 yards, par 3
Water, water everywhere, and lots of sidewinders to boot — a challenging par 3 with a championship design. A near-island green and lucky 13 makes for an opportunity for a golf shot. I took a lower route to the green, blading my shot and skipping it across the pond, nearly beheading one of my scaly swimming friends. Much to the delight of the greens crew who were cutting the grass and waiting for us to pass, the ball had enough power to skip out and land on the edge of the green. Cheers broke out and so did many a high five. The poor little bridge became a victim of John as he torpedoed a shot left, bouncing not as close as I, but chippable. A dent on the railing will remain for years.

HOLE 15 | 492 yards, par 5
Fifteen has to be included due to the massive snake we saw near the marker next to the green. I let out a high-pitched scream when I noticed the serpent slithering at my feet. The hole, henceforward forever dubbed “Snake Alley,” has a narrow throat to the landing area. Adrenalin still pumping, I slammed a shot long and to the left side, a good position to open up the fairway. A creek runs to the right across the fairway about 190 yards from the green. It continues on the right side and is not visible from the tee box. Snake Alley was a challenging hole, and the weather began to darken as we came to the final three holes. Fortunately, we completed the game before the storm started, carding another memorable round at Long Bay — snakes or no snakes!