Delhi is a lot. For first-time visitors it can be too much. With a metropolitan area estimated to be home to more than 23 million people, in some parts of the city you’ll believe you’re meeting all of them at once. Personal space becomes theoretical. Peace and quiet seems impossible.

Where can a visiting family begin to get a handle on this exhilarating, maddening, challenging, rewarding city? My own preference is Connaught Place (also known as Rajiv Chowk). This traffic circle effectively serves as the hub of the city, with the dense chaos of Old Delhi lying to the north and the leafy, relatively regulated order of New Delhi to the south. The circular roads, fringed by white colonnaded buildings housing many Western stores and restaurants, enclose at their center a tranquil green park. Here you can flit between international familiarity and the sensory bombardment of India.

At Connaught Place, start with the venue that provides both cool respite and preparation for everything to come: Museum of Illusions. The immersive exhibits literally turn the world upside down and inside out. After the surreal experiences of the museum, the city itself might appear a little less daunting.

Besides the crowds, the traffic, the noise and the smells, Delhi also proves chronologically disorienting. At more than 2,000 years old, the city offers visitor attractions that span most of that long, colorful history.

One of the oldest attractions is the Iron Pillar of Delhi, a solid iron column thought to have been constructed in the fourth century and miraculously resistant to corrosion ever since. The pillar sits in the ancient Qutb complex in the south of the city, which also features the famous Qutb Minar, a breathtaking brick minaret 200 feet tall, constructed 1199–1220.

From height to depth: Southeast of Connaught Place, look for the Agrasen Ki Baoli, a 14th-century step well with 208 stone steps down which early citizens descended to collect water (and then carry it back up). In late afternoon the deep interior provides welcome shade from the ferocious summer heat. Kids will be especially intrigued to learn the Agrasen Ki Baoli is infested with bats and reputed to be the most haunted place in Delhi.

The many layers of Delhi’s long history elicit endless fascination. Of all the eras, perhaps the Mughal Empire (16th to 19th centuries) proves most romantic to young Western eyes, as it left behind some incredible buildings. 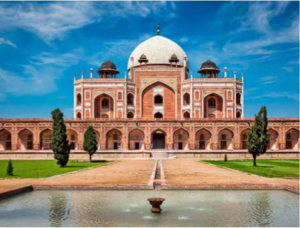 Humayun’s Tomb, for instance, a beautifully symmetrical mosque set within formal gardens, brings to mind the Taj Mahal. Even more spectacular, the Red Fort for centuries served as the stronghold of Mughal emperors. Its formidable walls constructed from red sandstone — hence the name — enclose an area of more than 250 acres containing many historically important buildings.

After the Mughals came the British, who ruled India until 1947. The government buildings of New Delhi, one of the lasting legacies of the British colonial era, were largely the vision of one man, British architect Sir Edwin Lutyens. The monumental layout of Lutyens’ Delhi provides some amazing lines of sight, especially between India Gate and Rashtrapati Bhavan (the official presidential residence). Unfortunately, these days the smog all too often blots out the view.

All visitors should note Delhi ranks as the most polluted capital city in the world. The air quality plummets to its worst during the winter months (October to February), India’s crop-burning season. Visibility sometimes reduces to the width of a street. People with chronic health conditions (especially asthma) should probably avoid visiting during that time of year.

Visitors should also be aware they will likely contract “Delhi belly” during their trip, though they can reduce the risks by avoiding tap water (even for brushing your teeth), ice cubes and uncooked food, especially salads. Peeled fruit and packaged snacks are generally safe.

The traffic presents a constant hazard. Even in seemingly pedestrianized areas, vehicles can appear from nowhere. When traveling with kids, drill them to be extra careful at all times, and keep them close when crossing roads. Officially, India drives on the left, though it’s quite common to encounter vehicles coming at you on the wrong side. 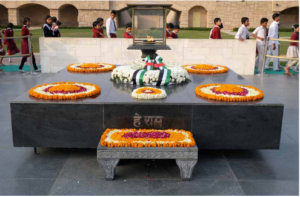 Such are the challenges of this city, but the rewards are immense and provide any visiting child with experiences to last a lifetime. Of all the historic sites, one of the most moving is Raj Ghat, India’s national memorial garden. Amid expansive, perfectly manicured parkland lie memorials dedicated to the country’s prime ministers and presidents. The centerpiece is a simple blue marble platform marking the cremation spot of Mahatma Gandhi, who led India to independence, bringing an end to more than two centuries of British rule. Nearby, Mahatma Gandhi Museum commemorates his life and work.

Besides the Lutyens’ capital, another legacy of that era is the railway system, which continues to keep this vast country moving. Delhi’s National Rail Museum celebrates this enduring mode of transport, with old locomotives on display and a miniature train carrying visiting families on circuits of the 11-acre site.

The country’s current rail system (much of which would not be out of place in the museum) remains in the midst of a revolution. Most notably, a new $4 billion rapid transit system is under construction to link downtown Delhi with the surrounding regions, augmenting the Metro system, which began operating in 2002.

For visiting children, the dynamism of Delhi can inspire: This is a city in which you can contemplate the marvels of the past and also imagine the possibilities of the future.

Leo’s Artisan Pizzeria
It’s possible you may want a break from the relentlessly spicy local food during your stay. The homemade pizzas served here — or delivered to your hotel — are probably the best in the city.
28 Basant Lok Market, Vasant Vihar, New Delhi
$$

INFO TO GO
International and domestic flights arrive at Indira Gandhi International Airport, 10 miles from downtown. A complimentary shuttle bus service runs between the three terminals every 20 minutes. By Metro, the journey into New Delhi takes 23 minutes. Taxis can take considerably longer in bad traffic but offer the convenience of direct transport to the door of your hotel. Several taxi companies operate from the airport, including family-friendly Sakha Cabs, with exclusively female drivers.