Immerse in the Current Culture to Impress Business Contacts in Seoul

The Korean Wave reached the English-speaking world belatedly. K-pop band BTS broke through in America in 2018, the movie Parasite won the Best Picture Oscar in 2020, and in 2021 the TV show Squid Game became the most-watched series ever on Netflix. Asia has been under the grip of Korean Culture since the 1990s. Now the rest of us are falling under its spell.

But to think of the Korean Wave as traveling in one direction would be misleading. In truth, the dynamism of modern Korean culture resides in its willingness to absorb and transform outside influences. You gain an immediate sense of that when you go looking for breakfast among the street food stalls of downtown Seoul’s Myeongdong district. Although the stalls are most popular after dark, some of them open early in the morning to provide commuters with breakfast on the move.

Many offer variations on the theme of toast. There’s French toast, omelet in toast, egg and bacon in toast, fried vegetables in toast and many other combinations. A more traditional delicacy is gyeran-ppang, or egg bread, a sweet (or sometimes savory) snack that looks like a miniature loaf of bread embedded with a fried egg. The most popular egg bread stalls often have long queues of waiting customers. Whatever your choice, for around $2 you’ll get a filling, tasty breakfast.

For a formal (and much more expensive) business breakfast, The Seven Square in THE PLAZA Seoul hotel offers a sophisticated downtown option, with private rooms for up to 30 people. Breakfast is served 7–10 a.m.

With a population of 20 million, Seoul is the world’s second-most populous metropolitan area after Tokyo. This big, sprawling city is disrupted by a pre-existing geography of mountains and the great Han River. The busy highways twist around the natural contours and funnel through tunnels and over bridges. By vehicle, especially in peak periods, it can be a challenge to get from one district to another. By metro it’s relatively effortless. From Myeongdong we speed under the forested hulk of Namsan Mountain and emerge on the other side in Itaewon, a shopping district that has attracted American GIs and other foreigners since the Korean War.

There are plenty of great Korean restaurants to choose from in Itaewon, as well as the full range of international cuisine, including halal and vegan. For a swanky business lunch, one of the latest venues is Cleo, a Mediterranean fusion restaurant in the new Mondrian Hotel. You can eat inside or out on the terrace.

In the afternoon, we hop back on the metro and travel under the Han River to the upscale neighborhood of Gangnam. If there’s a source for the Korean Wave, it’s here. Many of the world’s cultural and technological trends are forged among Gangnam’s glitzy skyscrapers and cutting-edge cafés and bars. 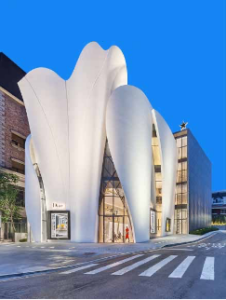 While techies flock to Gangnam’s electronics stores, the district is perhaps best known as Seoul’s center of fashion. Apgujeong Street, with its abundance of exclusive boutiques housed in breathtaking buildings, resembles Rodeo Drive. Perhaps the most celebrated boutique is House of Dior, since 2015 occupying a striking white building designed to reflect the classic flowing Dior dresses of the 1940s.

Alongside high-end shopping, Gangnam developed a sophisticated café culture, which reaches its pinnacle at Dior. Take the elevator to the fifth floor and step out into an environment of mirrors and white marble. Café Dior is a favorite venue of Seoul’s fashion elite, so no matter how much effort you make, you’ll invariably feel underdressed. The setting is one thing, but we’re here for the legendary afternoon tea, with patisseries designed by one of the world’s greatest pastry chefs, Pierre Hermé. It’s not cheap: For a formal tea for two expect to pay around $120 … perhaps worth the price to impress a special client.

For an informal business meeting, Jogakbo Bites & Wine at Andaz Seoul Gangnam hotel fits the bill. You can opt for afternoon tea (complete with cakes and pastries) or tapas paired with Champagne, wine or craft beer. It’s a great place to end the business day or to begin a night on the town with business contacts.

The Korean Wave takes the familiar (pop music, genre movies, TV series) and makes it exotic — and vice versa. We experience that same exhilarating, see-saw duality throughout our time in Seoul. From the cheapest of breakfasts in Myeongdong to the international flavors of Itaewon to the cosmopolitan sophistication of Gangnam, this city lets you reinvent yourself several times in the course of a day.