ONCE ONE OF INDIA’S RICHEST states due to fabulously wealthy Muslim dynasties that ruled it for centuries, this south-central Indian city has a new source of prosperity: technology. Google, Amazon, Microsoft, Facebook, Oracle, Apple, Dell, Accenture and Deloitte have offices in the city once renowned for gem trading. The world’s most famous jewels, the Koh-i-Noor and Hope diamonds, came from mines near Golconda Fort. But today’s nickname for the City of Pearls, second only to Bangalore in India for high tech, is Cyberabad.

In fact, the CEOs of Microsoft, Adobe Systems and MasterCard even attended the same high school in Hyderabad, a private school modeled after Eton. (Microsoft CEO Satya Nadella and Adobe CEO Shantanu Narayen were born here; MasterCard CEO Ajaypal Singh Banga was not.) Microsoft maintains its India headquarters here, though it operates nine offices in India.

The streamlined, efficient airport won the No. 1 airport award in Airports Council International’s Airport Service Quality survey in 2016 and 2017 in its size category, plus its 2018 Green Gold award for its eco-friendliness. Hyderabad Metro Rail, an elevated rapid transit train opened in late 2017, soars above the city’s traffic snarls and is already expanding; some train stations have grocery and convenience stores catering to IT staffers working odd hours. HITEC City, opened in the western suburbs in 1998, is growing by leaps and bounds. 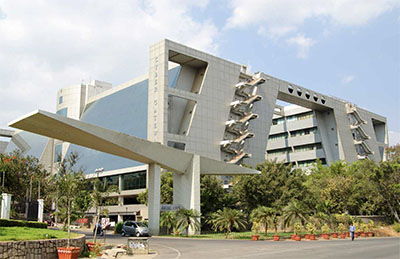 India’s first IKEA even opened here last August, bringing traffic to a screeching halt, with mobs of locals delighted the Swedish furniture chain outlet is identical to those they’d seen in the United States and Europe (though samosas and pakoras join Swedish meatballs in the cafeteria).

In total contrast, you’ll still see burqa-clad women and the occasional camel and cow in the Old City, along with magnificent palaces, frenetic bazaars, traditional crafts and more gems than you can possibly imagine. The former rulers wore turban ornaments set in diamonds, rubies and emeralds and used the 183-carat Jacob diamond as a paperweight.

Hyderabad dominates as the only sizable city in Telangana, India’s newest state, which in 2014 split off from Andhra Pradesh. Before that, Hyderabad was a princely state, divided in 1956 among Andhra Pradesh, Maharashtra and Karnataka. Once as big as France, during its glory days the Qutub Shahi kings ruled in the 16th and 17th centuries, followed by Mughal emperors. But from 1724 to India’s independence in 1948, the Asaf Jahi dynasty reigned, calling themselves Nizams. Of the Nizams, a maharajah commented, “If, on a pair of weighing scales you put all the 565 maharajahs and rajas on one side and the Nizam on the other, they would perhaps be equally balanced.”

Things to Do in Hyderabad

To glimpse the Nizams’ lavish lifestyle, check out the guest palace where royalty like Queen Mary and King George V of England and the czar of Russia once stayed: It’s now the Taj Falaknuma Palace hotel. Even non-guests who come to dine or sip cocktails can take a free tour of the surprisingly European-looking palace behind a magnificent Neoclassical façade, built 1884–1893 (reservation required). The entrance foyer, with its white marble cherubbedecked fountain and frescoed walls and ceiling, will remind you of Italy; the silk and brocade wall hangings and furniture, of France; the library (with the coffered wood ceiling inspired by Windsor Castle’s library), stained glass and busts of British royalty, of England; plus a dose of exotic Orientalism. 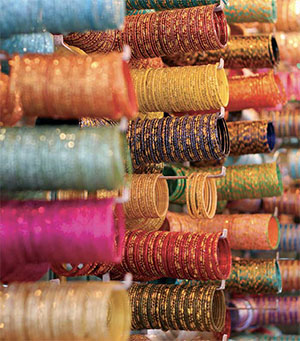 Colorful bangles for Sale at the Laad Bazaar near Charminar © RAKESH KRISHNOTULA – DREAMSTIME.COM

Climb the staircase at Charminar, the massive minaret-topped arch built in 1591 that’s the iconic symbol of Hyderabad (its own Arc de Triomphe), for a panorama of the Old City. Next to it, bazaars sell pearls, jewelry, perfumes, bangles (made in a rainbow of colors from resin, set with stones or beads), silk saris, antiques, spices, art and fabrics.

Talk about fashionistas: The Nizam’s wardrobe closet, more than 160 feet long and two stories high, wins, hands down. You’ll gape at this and more than 450 items owned by the last Nizam at H.E.H The Nizam’s Museum, located in Purani Haveli palace. See everything, from the marble bed, bureau and writing table elephants carried on his hunting trips to his gold-burnished wood throne, models of buildings built by the Nizams in pure silver, and bling galore. 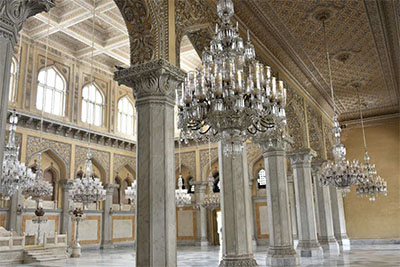 Companies can hold dinners and receptions in the grand hall, lit by 17 crystal chandeliers, and courtyards at Chowmahalla Palace, a meticulously restored palace complex built in 1750 where the Nizams entertained official guests.

South India’s film industry, Tollywood, is based at Ramoji Film City. A bus tour lets you visit movie and TV sets and the many gardens, from topiaries of elephants and peacocks to Japanese designs.

What kind of insider experiences do you offer?
Detours India visits workshops or homes of various artisans, showcasing fabric painting techniques like kalamkari; metal crafts like bidri and pembarthi; weaving techniques like himroo and paithani; and scroll painting, called cherial. We do cooking classes and meals in people’s homes. Our White Mughal history tour tells the story of a British East India Co. official who married a relative of the Nizam’s prime minister and built a mansion here.

What cultural differences should foreign investors be aware of when doing business in India?
In India there is a bigger focus on relationship-building, and Americans working here quickly realize its importance. Decisionmaking is not just based on logic and reasoning. The level of comfort in a business relationship is also important.

How has the city changed?
I’ve seen the growth of HITEC City and the shift of retail and other businesses to that area. Hyderabad has become more cosmopolitan with more global citizens making it their home. The city is a blend of cultures from north and south India, a cultural mishmash.

What major developments do you foresee for Hyderabad?
The new state government strived to reshape policies to bring in foreign investment and improve the ease of doing business in Telangana. Many infrastructure improvements are planned, from building expressways and underpasses to a monorail.

COMING AND GOING
All U.S. citizens require a valid passport and valid visa to enter India. Your passport must be valid for at least six months and have at least four blank pages (though instructions say two). Get a visa from the Indian Embassy, your nearest Indian consulate or Cox & Kings Global Services before arrival.

OFFICIAL LANGUAGE
Telugu, but Urdu and Hindi are widely spoken. English is the language of business.

Where to Stay in Hyderabad

ITC KOHENUR Suites at this contemporary-style luxury hotel in HITEC City are some of the city’s biggest. Eco-friendly features include a living roof and vertical gardens. More than half the rooms offer views of Durgam Lake. Plot No. 5, Survey No. 83/1 $$

FUSION 9 Enjoy a global menu from Indian to Western matched by a global choice of cocktails in a stylish, contemporary setting in the posh Jubilee Hills. Fusion 9 serves a popular Sunday brunch. Plot No. 885, Road No. 45, Jubilee Hills $$

SIMPLY SOUTH Winner of the Times of India award for best south Indian fine dining, this restaurant showcases food from five south Indian states in a contemporary space in Jubilee Hills (and a branch in HITEC City). Plot No. 258, Road No. 82, Film Nagar f $$

SO THE SKY KITCHEN Candlelit dining on this rooftop terrace with a park view and live music make a most memorable experience. Its big menu roams from north India, Southeast Asia and China to the Mediterranean. No.550-F, Aryans Building, Road No. 92, Jubilee Hills $$