When the totally revamped Fairmont Century Plaza reopened on Sept. 27, 2021, I drove to the entry, adjacent to the signature 23-foot-tall mesh sculpture “Laura” —  which appears to float atop the reflecting pool — and toured the Accor luxury property, the new flagship for the Fairmont brand. On a recent return to Los Angeles, I relished the total @sipsupstayspa experience.

After brunch — house-made smoked salmon with crème-fraiche and a taste of the signature Lumière Breakfast (ham, eggs and a Gruyère cheese topped crèpe) — I headed to the experiential rain showers, sanariums, aromatherapy steam rooms, hammam and the Himalayan salt room within the 14,000-square-foot Fairmont Spa Century Plaza. Leonora introduced me to the state-of-the-art technologies of a Bio Hacking session, which incorporates NuCalm neuroacoustics (electronic sound waves) and Normatec compression boots before an impressive, and effective, facial.

Before dinner, a friend and I sipped Champagne while admiring the music-themed cocktail menu at a table next to giant window walls that retract into the floor in the expansive, light-toned lobby. All four elements costar here: air, for the indoor-outdoor lobby; earth, with a living green wall at The Bar at Century Plaza; fire, with a floating fireplace; and a water feature. 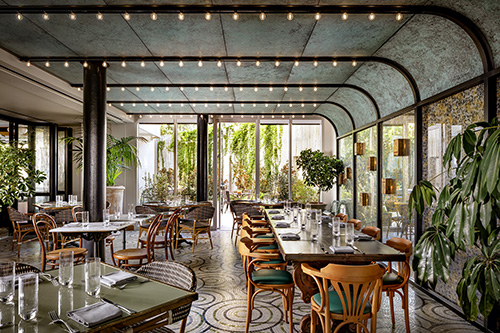 We strolled to Lumière, a traditional 1920s French-inspired brasserie, through a space interpreted by EDG Design on penny-tile patterned floors. We walked past an authentic maître d’ desk, open kitchen with a wood-fired hearth and a repurposed, antique pastry case and dined on French fare created by executive chef Ramon Bojorquez. My companion’s onion soup arrived sans crouton (she’s gluten-free) and she delighted in a vegan dish: roasted eggplant with shaved winter squash and charred baby tomato on a cashew cream. Olive oil jam and crusty toast accompanied my chicken liver mousse and I couldn’t resist tasting both the duck confit and a rare steak with pommes frites, as well as the crème brulée. (It was a long winter of at-home meals since being in France in the fall!)

The international design firm Yabu Pushelberg reimagined the Mid-Century Modern icon that famed architect Minoru Yamasaki designed; when it opened in 1966, it was dubbed the “Hotel of the Future.” The upgraded project reduced 720 accommodations to 400 spaciously luxurious units; and 63 upper-floor, privately-owned residences topped by a Rooftop Pool Deck with expansive views of the ocean, Getty Museum and the Hollywood Hills. 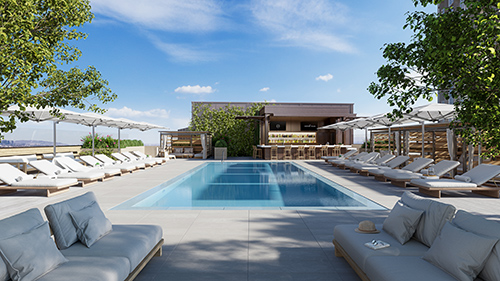 My suite, one of 85, had a separate living room and bedroom, plus twin balconies. The neutral backdrop was furnished with Mid-Century Modern pieces: curved-back chairs, teardrop and round tables atop three-legged pedestals or round metal bases. Amenities included a pillowtop bed, Egyptian cotton sheets, complimentary WiFi and designer toiletries in the marble bathroom.

The 16-story curved façade stands on land formerly used as 20th Century Studios’ backlot; it has been transformed to LEED Silver standards into the cultural and hospitality hub of Century City, an upmarket, 176-acre, residential office and shopping complex adjacent to Beverly Hills. The hotel, on a six-acre site, centers a $2.5 billion mixed-use development, with a public plaza (which occupies the space of the former pool deck) abutting 94,000 square feet of ground-level boutique shopping (at the base of two new 44-story residential towers). The hotel offers a walkway to Westfield Century City, reopened after a comprehensive renovation in 2017.

Fairmont Century Plaza is an up-to-the-minute destination with a modernist history!