Explore the Solemn History and Vibrant Culture of Dakar

As the ferry leaves port, the sounds and fumes of Dakar disperse on the sea breeze. After a few days immersed in Senegal’s frenetic, colorful, dusty capital city, my short voyage to an offshore island promises a change of pace. But it will also be challenging. I am heading to Gorée, a place synonymous with the Atlantic slave trade. 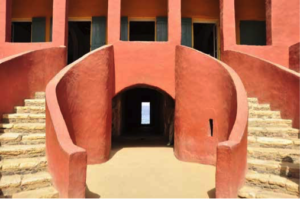 The Portuguese and then the Dutch, the British and the French converted this little island into a fortress. The battlements remain, and within them the cobbled streets wind narrowly between colonial buildings. All visitors are drawn to one building in particular, the House of Slaves. Here African slaves were held in cramped, windowless cells before being escorted in chains along a narrow stone passage to a rectangle of blinding light at the far end: The Door of No Return.

Today people stand solemnly in front of it, imagining the 12 million slaves forcibly transported from Africa to the Americas, never to return. Some of their descendants now return; Gorée is a place of pilgrimage. Although some historians argue Gorée’s role in the slave trade has been exaggerated, this atmospheric island now serves as a poignant memorial and is an essential stop on any itinerary in Dakar.

Dakar occupies an arrow-shaped peninsula jutting into the Atlantic. This is the westernmost point of Africa. The markets are thrillingly chaotic; the streets teem with traffic, people and livestock. My rusty schoolboy French is enough to get by; but if you don’t know the language, it’s worth hiring a guide/translator. Few people here speak English.

At sundown I find myself at the foot of the African Renaissance Monument, a 160-foot-tall copper statue of a woman, man and child. Constructed by North Korean engineers in 2010 on a hilltop facing the ocean, it has been criticized on grounds of taste and cost ($27 million). But like it or not, it is a bold proclamation of a city that has thrown off the shackles of the past and is looking to new horizons.