When you think of Canada, places like Montréal and Toronto likely come to mind. Montréal, with its jazz and countless other festivals, cobblestone streets, museums, restaurants, European flavor, vibrant neighborhoods and treasures like Notre-Dame Basilica, exudes a magic of its own. Toronto has no twin. Diverse with more than 140 spoken languages and dialects, the city buzzes with a robust culinary scene and a plethora of dance companies, museums and music venues. But there’s much more to the Canada story: Consider these intriguing destinations in the East Coast provinces.

Another gem, the fishing village of Peggy’s Cove, boasts the Instagram-worthy Peggy’s Point Lighthouse on a rocky outcropping. Sip wine in Wolfville and enjoy Nova Scotia’s own grape, Tidal Bay. Domaine de Grand Pré, the first winery in the area and a UNESCO Heritage site, is perhaps the best-known Nova Scotia winery.

PRINCE EDWARD ISLAND
The Island Walk, launched during the pandemic, loops around the perimeter of PEI. Its 430 miles make a great way to explore Canada’s smallest province. Do as much or as little as you like. See lighthouses, red-sand beaches, provincial capital Charlottetown, Summerside, small coastal communities and more. For something different, head to Basin Head Provincial Park and Beach, nicknamed Singing Sands because the beach sand makes singing sounds when you scuff your feet through it.

PEI is all about fishing, especially bluefin tuna. Set sail on a tuna charter. Check out new food tours like Charlottetown’s Taste the Town: Food + Fact Tour. Explore North Rustico and Cavendish, storybook small coastal towns with local shops and great food. Put Blue Mussel Café in North Rustico on your list; it overlooks the ocean. As for where to stay, consider The Great George in Charlottetown. The boutique, historic hotel is a beauty. 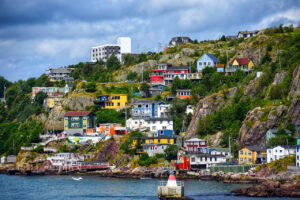 NEWFOUNDLAND AND LABRADOR
The capital of the province of Newfoundland and Labrador, St. John’s is known for colorful houses, cafés, seafood (the lobster is the stuff of legends), hiking trails, wildlife (especially moose) and the 1898 Cabot Tower. Grab a pint at Quidi Vidi Brewery. The Merchant Tavern, with its double smash burger and wild leek orecchiette, remains a favorite. Check into Blue on Water; the stylish boutique hotel boasts a large selection of whiskey in the bar and an award-winning restaurant.

Fogo Island is the largest of the offshore islands of Newfoundland and Labrador. For a big adventure, spend the night at Fogo Island Inn. This Nordic-style luxurious hotel sits atop stilts overlooking the wild Atlantic. Talk about being away from it all! Imagine the sound of waves lulling you to sleep. Walk the island’s trails and count the caribou. Time your visit during the Fogo Island Partridgeberry Harvest Festival in October for farmers markets, crafts, music, food, dancing and more.

5 Fishermen
The mood is set in what was a schoolhouse in 1817. People may come for the thrill of the “haunted” historic building as much as the prosciutto-wrapped chicken and spring rack of lamb.
1740 Argyle St., Halifax, Nova Scotia
$$$$

INFO TO GO
Flying into Halifax, arrive at Halifax Stanfield International Airport, about 30 minutes from downtown in Enfield. Eight airlines regularly serve the airport, with an additional six seasonal carriers, bringing travelers from a wide array of domestic and international cities. There are six car rental options at the airport.

To reach St. John’s in Newfoundland, fly into St. John’s International Airport, served by most major airlines including Air Canada, WestJet and United Airlines. Depending on where your trip originates, you may need to plan for one or two connecting flights. 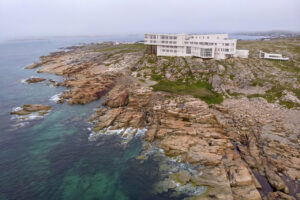 After flying into Gander International Airport, consider renting a car to drive to Fogo Island and to get around on the island. Most major car rental agencies have an office at Gander Airport. Access Fogo Island via a 50-minute passenger and vehicle ferry from Farewell, about an hour’s drive from Gander along Route 330.