Until you visit, you may never know the extent of Buenos Aires’ cosmopolitanism. From design and architecture to technology and banking — and across all the arts — Buenos Aires truly has a global feel that rivals Paris, New York and Tokyo. While it’s on the water, Buenos Aires is not a beach destination like Rio but rather a port city — hence locals are called Porteños and have a zest for life and want to share it with all who visit.

Almost as soon as you enter this beautiful Argentine capital, it becomes obvious just how fantastic this energetic metropolitan city truly is. You’ll likely spend most of your time between upscale, classic Recoleta; chic, eclectic and fashionable Palermo; and the romantic and gentrified San Telmo, where you’ll find a sprawling open-air antique flea market each Sunday. But the Central Business District of La Citi, between the San Nicolás, Montserrat and Retiro neighborhoods, is home to the Buenos Aires Stock Exchange, Argentina’s Central Bank and other financial institutions.

No matter where you gather with colleagues and clients, you’ll notice quite quickly the European influence on the city’s architecture. Waves of immigrants from Spain, Italy and Germany — and what now comprises the world’s sixth-largest Jewish community — all arrived in Buenos Aires in the 19th and 20th centuries, bringing with them design, culture and gastronomy. All over the city their impact can be observed by simply walking around the neighborhoods and looking up at the homes and buildings. You’ll especially see it at Teatro Colón, one of the most important opera houses in the world, where singer Maria Callas famously performed and which offers group tours. At the Museum of Latin American Art of Buenos Aires, modern and folk art converge in permanent and rotating exhibits. You can experience it in any number of the city’s top spots to watch the romantic, sensual tango shows — and learn a few moves yourself in this, the world’s tango capital. You’ll even encounter it in La Recoleta Cemetery, a neighborhood in its own right where some of the city’s most important residents, including Eva Perón, are buried.

When it comes to business, Buenos Aires’ numerous industries converge. In 2017 the city was named a smart city due to its welcoming attitude toward innovation, entrepreneurship, technology and app development. The newer Buenos Aires Exhibition and Convention Centre hosted the 2017 Smart City Expo World Conference, where visitors from around the world came to discuss open government, sustainable urban planning, digital innovation and city life. In late 2018 Buenos Aires welcomed the G20 Summit for the first time, coinciding with Argentine president Mauricio Macri serving as the head of the powerful Group of 20. 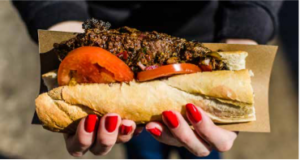 While all this business activity may seem vast and even disparate, one thing that ties most things together in this fast-paced city — where dinners often don’t start until 9 or 10 p.m. — is a vibrant cocktail culture. Whether you’re meeting over lunch at one of the many parrillas (steakhouses) like Don Julio, having drinks after work or going out to bars or clubs after dinner, cocktail culture thrives in Buenos Aires. You can find great drinks everywhere, whether in upscale Recoleta hotels like the Four Seasons, Palacio Duhau Park Hyatt or the Alvear Palace Hotel; cool boutiques like Fierro Hotel, Mine Hotel and Faena Hotel; or in hip bars and speakeasies throughout the city.

Consider entertaining at Florería Atlántico, one of the world’s most celebrated bars, which honors the city’s immigrant culture. Hidden behind a secret door inside a working flower shop in Recoleta, this speakeasy bar, on the World’s 50 Best Bars list, serves a cocktail menu reflecting global cultures. A few blocks away, Presidente Bar from celebrated mixologist Seba Garcia offers sophistication not only in the décor but also in the drinks. If your clients are more serious about their cocktails, ask the Presidente staff to open the door to the Library, a hidden bar tucked away through a door off a hallway at the back of the bar, where an entirely different batch of cocktails emerges, sure to impress. Across town in Palermo, cocktails converge with gastronomy, and ingredients like sesame oil, acai caviar, blue cheese and pumpkin syrup drive the flavors at Anasagasti.

Buenos Aires may seem meat-heavy, but don’t be fooled into thinking the city doesn’t have a vibrant culinary scene ready to please any palate. The aforementioned Jewish population is making headway, opening a number of innovative restaurants like Mishiguene and Fayer from celebrated chef Tomás Kalika, introducing Porteños to a mix of Middle Eastern and Eastern European delicacies with a modern twist. Vegan and vegetarian cuisine pushed to the fore and is available at places like Bio. Local cuisine gets celebrated at El Baqueano in San Telmo, where you’ll find tri-colored quinoa, llama tartare and wines from throughout Argentina all paired to an experiential tasting menu. And cafés with locally roasted coffee and yerba mate abound.

Whether this is your first visit to Buenos Aires or you’re coming back to mix business with pleasure, you’ll find many new discoveries while connecting with clients old and new. Because when all is said and done, nobody is a stranger in Buenos Aires — at least not once you finish that first round of cocktails with the table of Porteños next to you.