THE ELEPHANT HILLS GOLF COURSE lies directly behind the Elephant Hills Hotel and first opened for play in 1974. South African professional golfer Gary Player, known for his “walk through” golf swing, designed the course. When the course opened, it measured more than 9,200 yards from the tips and was considered one of the most challenging courses in the world.

In 1977 a consuming fire — caused by a rocket launched from the Zambian side of the Zambezi River during the Rhodesian wars — destroyed the Elephant Hills Hotel. The attack happened the day after the Elephant Hills Golf Classic, and fortunately most guests had vacated the property the day before. The destruction of the hotel caused the course to fall into disrepair; by 1987 trees, some more than 16 feet tall, grew in the middle of the fairways, and the animal population, including root-seeking warthogs, had their way with the greens.

In 1989 the hotel was rebuilt; at the same time, the course was refurbished and the yardage tamed to a shorter 6,780 yards. The course reopened Feb. 1, 1992, with nine holes to play, with the balance completed by the end of that month. The fairways are seeded with Bermuda grass from South Africa, and the greens are Tiff Dwarf from plugs donated by the Triangle Country Club in Zimbabwe, near the Mozambique border. All the vegetation is indigenous to the region, and there is a natural game path just beyond the fence around the course. From the course you can see impala, waterbuck, kudu, warthogs, vervet monkeys and baboons, along with a host of exotic birds. At times you can even see elephants just outside the fence. Hotel guests can merely walk to the back of the property and tee off on the first hole in a matter of minutes.

HOLE 4 | 543 yards, par 5
Elephant Walk Coming off an inconsistent start — carding a double bogey, par and single bogey on holes 1, 2 and 3 — I tried to settle into a more consistent rhythm. Unfortunately, my driver was not of the same mindset, and I landed on the right rough with a difficult second shot before me. My caddie (Polite was his name) suggested I take the 3-wood and hit the ball back in play. I nailed a great shot, still favoring the right side and rough. My approach shot required I clear a herd of grazing impala and a bunker. Fortunately, with Polite’s encouragement, I hit the shot of the day, landing squarely in place for a birdie putt, which I unfortunately missed!

HOLE 14 | 384 yards, par 4
Rippling Water Polite warmed me to stay way left of the right side of the fairway, as a stream runs the entire length and turns in front of the green, forming a small pond. The hole is designed as a slight dogleg right with the water as the main hazard. I teed up with all the right intentions, but my ball sliced (I put the blame on my rental set) and luckily hit a palm tree, dropping within play. From here I had another calamity, hitting the ball but still on the right and landing on the embankment to the water, in the rough. Polite immediately suggested a 9-iron to lift the ball out and onto the green. I was reluctant, spotting a large tree I had to sail over, but rather than laying up, I felt Polite knew my game by now and swung away. The ball lifted out perfectly and flew over the tree, landing left of the pin. Polite lined up my putt, which was at least 20 feet, and I nailed it in the back of the cup for par. A sloppy par, for sure, but a par nonetheless! 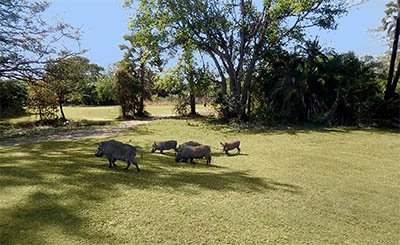 HOLE 15 | 174 yards, par 3
The Baobab A tree sits in the front of the green’s path from the tee box, which can be a little intimidating. In addition, a “crocodile pond” sits on the right side of the hole and extends in front of the right side of the green. Polite simply placed a 5-iron in my hand and said, “Attack the pin!” I took his advice with the Tight Lies rental set and launched into a beautiful shot, landing on the back side of the left portion of the green. “Excellent shot!” said Polite. As we approached, we frightened some warthogs that were rooting around on the club’s prized Tiff Dwarf greens. I nearly birdied the putt, resulting in a par for the card.

HOLE 18 | 419 yards, par 4
Lion’s Claw Eighteen is a dramatic finishing hole, as the hotel sits proudly on a hill just beyond the green, along with the greenside restaurant where I anticipated celebrating my round of golf. But first I had to finish the challenge and take on Gary Player’s final hole at Elephant Hills. Polite handed me the driver and suggested I land my ball favoring the left side of the fairway. Unfortunately, I sent my drive sailing into the trees on the right side just short of a pond. Fortunately, the tree roots kept me safe from the water, but this meant I had to take a 7-iron and knock a low shot back into play. I did this successfully and landed 150 yards short of the green in the rough but in a perfect lie. Polite offered me an 8-iron and told me, “Attack the green — you can still get par!” With his encouragement, I sent the 8-iron onto the ball, launching it high in the air right for the center of the green. “Good shot, sir,” said Polite. As we walked to the green, Polite shared his caddie history at Elephant Hills — seven years — and I could not have had a better man navigate me around the course. I lined up the putt and just missed the cup, a decent bogey, considering my drive.

I paid and tipped Polite and sat at the restaurant, enjoying a Zambezi Lager and a croque-monsieur and pommes frites while I watched the foursomes who followed me complete their rounds. We played 18 holes in two and a half hours, perfect timing so I could take a helicopter tour of Victoria Falls.