The Denver population grew 20 percent over the last decade, and its ever-increasing intrigue brings in more than 13 million additional visitors each year. From Red Rocks to the Denver Beer Trail, with world-class art, bountiful nature and an explosive marijuana tourism industry in between, the reasons to visit Colorado’s capital diversify as rapidly as its population itself, and the city spends billions to accommodate the growing interest.

Richard W. Scharf, president and CEO, Visit Denver, sees the city’s enormous self-investment as a symbol of Denver’s pandemic recovery. “The tourism and convention industries are among the largest industries in Denver, and they are currently rebounding in a big way,” he said, adding, “Our leisure visitors have returned to a pre-pandemic level.”

Like most major cities, Denver has plenty of development underway aimed at mixed-use spaces, from the 13-story Populus coming to Downtown to the 25-year, multimillion-square-foot reimagining of The River Mile. Both the hotel and arts industries keep pace, but the upgrades to tourism basics may prove to have the greatest impact on the city.

Scharf expresses optimism the “massive redesign and expansion of Denver International Airport and a major expansion of the Colorado Convention Center, on track to be completed in late 2023, will only add to the comeback story,” and there’s little reason to doubt him. Denver International Airport already ranks as the third-busiest in the world, not far behind second-place Dallas/ Fort Worth. DEN’s current concourse expansion plan holds a $1.5 billion price tag and will add 39 gates to all three of its concourses, some of which already opened. An additional $2.4 billion is headed toward other airport upgrades, including restroom refreshes and vastly expanded security facilities as the airport gears up for an estimated 100 million annual arrivals within 10 years. 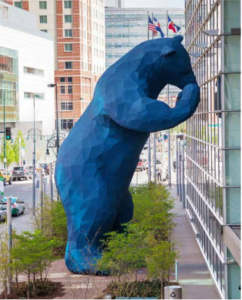 As for Colorado Convention Center, which you may recognize by the enormous and wildly popular blue bear peering in from the sidewalk, the nearly quarter-billion-dollar project packs a number of impressive stats that will position Denver as a leader in the conventions and events industry. The expansion supplements the already impressive facility with an additional 80,000-square-foot ballroom (the largest ballroom in Colorado); 35,000 square feet of pre-function space; and 20,000 square feet of outdoor terrace with sweeping views of the city skyline and mountains … all seamlessly integrated with the existing building. All told, the redesigned convention center expects to generate $4 billion in gross regional product when it reaches its completion.

Conventions and festivals already returned from the pandemic freeze, and CCC’s calendar continues to book throughout its renovation, thanks to clever logistical planning that allows the convention center to remain open and operational throughout the two-year process. Organizations and acts are eager to return. After canceling its 2021 edition, the Great American Beer Festival returns to the convention center this fall for its 40th anniversary, expecting a gate of 50,000 for its three-day beer bash; and acts like Alicia Keys and Chris Rock already marked summer returns to grateful Denver audiences. To close for renovation directly on the heels of a prolonged COVID shutdown would have spelled economic disaster for the city. Instead, the tourism forecast for Denver is sunny … as is the weather, 300 days of the year.

To experience one of the most beautiful highway drives in America, head to Golden, Colorado, and take Route 6 W to Idaho Springs. This path takes you through the impossibly scenic Clear Creek Canyon, though GPS will often try to divert you to Route 70 W, instead, to save 20 minutes; ignore this “advice.” Along this stretch you’ll follow Clear Creek (of course), and find mature trees, granite cliffs, abandoned mines and beautiful old homes. You may even catch sight of some wildlife, especially if you stop at any of the many pull-offs or take a hike on Mayhem Gulch Trail. 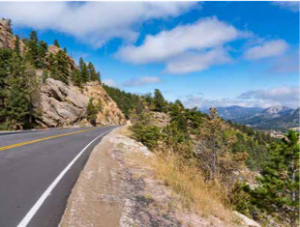 If you’re visiting in fall, set aside an afternoon for the Peak to Peak Scenic Byway. The first and favorite of Colorado’s 26 scenic byways covers a 55-mile stretch of Rocky Mountain Front Range splendor, especially when autumn leaves turn the route into a golden passage. It’s about an hour outside of Denver and will take around 90 minutes each way, without stops. To roundtrip it in a single journey, allow at least five to six hours from start to return in Denver. Add more time for pitstops in mountain towns like Estes Park and Nederland, or any of the state parks and national forests you’ll pass along the way.