VIETNAM’S CU CHI TUNNELS attest to the extraordinary resourcefulness and resilience of a group of Southern Vietnamese people, known as the Viet Cong, during their struggle to fight and survive the Vietnam War. Located just outside Ho Chi Minh City in the region of Cu Chi, the tunnels enabled the Viet Cong to survive underground during this historic conflict which broke out in 1954, pitting the Communist Viet Minh party of North Vietnam and its southern allies, known as the Viet Cong, against the non- Communist faction of South Vietnam and its main ally, the United States.

Two sites — Ben Dinh and Ben Duoc — allow visitors to view and even crawl through the tunnels, which the Communist forces built over the course of 20 years. To view either one, the easiest method is to have your hotel arrange a tour out of Ho Chi Minh City. You can be picked up at your hotel, taken to the site and returned later that day — the tunnels lie about 20 and 30 miles outside of Ho Chi Minh City. You’ll want to wear clothes you don’t mind getting dirty. 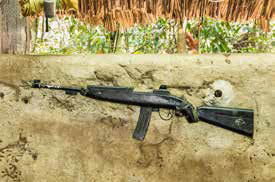 Because the tunnels of Ben Dinh lie closer to Ho Chi Minh City, they’re the most popular to visit. Your guided tour begins with a short film explaining the historical background of the tunnels. It’s worth knowing before you get down on your hands and knees that the original region of Cu Chi was thick with rubber plantations supplying a French tire company. Apparently, the area’s first tunnels were dug in the 1940s by the anti-colonial Viet Minh to store their arms during their struggle for independence from the French. The Viet Cong greatly expanded the network, easily dug from the area’s compacted red clay. However, as you’ll learn from your guide (or supplementary reading), all the ceilings of the tunnels had to be reinforced, ideally with wood. But since American bombing of the area reduced the availability of timber, the Viet Cong ended up using iron fence posts from enemy bases.

Within the multistory tunnels — some were four levels deep — the Viet Cong lived for weeks, even years. The tunnels had sleeping quarters, meeting rooms, schools, kitchens, wells and latrines, as well as makeshift hospitals. Surgeons operated by torch light using rudimentary instruments, and a patient’s own blood was deposited in a bottle and then pumped back into the body using a bicycle pump and rubber hosing.

Although the tunnels had vent shafts to disperse cooking smoke, not surprisingly the passages could become extremely hot and foul-smelling. Inhabitants also had to fight off bats, snakes, scorpions, centipedes and fire ants. The Viet Cong used some of these creatures as weapons, setting up boxes of scorpions and hollow bamboo sticks filled with vipers in areas of the tunnels the enemy (mainly American forces) might enter. Flooding in the tunnels was a constant risk, as was disease, particularly malaria. Hidden trap doors provided release points for the inhabitants, who would leave the tunnels to fight and hunt for food (mainly roots and leaves, since American chemical weapons and bombs destroyed most of the Viet Cong’s rice paddies and fruit crops). After an attack, the Vietnamese fighters disappeared into the tunnels, eluding their American enemy. The Viet Cong not only used the tunnels as living quarters but also as hideouts and routes to transport communications and supplies. For tunnel inhabitants who stayed underground for extended amounts of time, the darkness was so intense, when they finally exited they suffered temporary blindness. 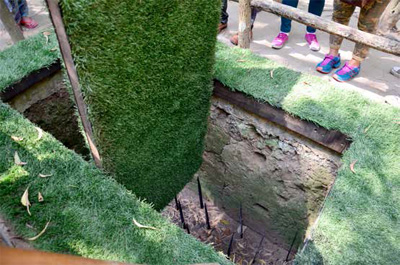 A booby trap with bamboo spikes at the tunnels © TUAYAI | DREAMSTIME.COM

American soldiers knew about the tunnels and tried to flush out the enemy. In addition to using bulldozers and defoliant sprays, American soldiers crawled down into the tunnels with hand grenades or gas bombs. The tunnels, however, were often so low and narrow American soldiers could not get down them, let alone scurry through them. Indeed, as you make your way through the labyrinth of dirt passageways (many of which have been widened to accommodate the larger girth of visiting tourists), you’ll sense immediately how dark, dirty and claustrophobic they feel, even after only 10 minutes. As you might imagine, the tunnels open to visitors only represent a fraction of the 155-mile-long and 30-mile-wide network.

More than 3 million people perished during the war; half were Vietnamese civilians. In 1973 President Richard Nixon ordered the withdrawal of U.S. troops from Vietnam. In 1975 the war ended when Communist forces took control of Saigon (now Ho Chi Minh City) and renamed the country the Socialist Republic of Vietnam the following year.

Years after the war, the Vietnamese government created a war memorial park that included the Cu Chi tunnels, where more than 45,000 Vietnamese were said to have died. In 1982 the Vietnam Veterans Memorial opened to the public in Washington, D.C., inscribed with the 57,939 names of American armed forces killed or missing during the war.

Many airlines fly daily from the United States to Vietnam, including Korean Air, Cathay Pacific and American Airlines. Ho Chi Minh City’s Tan Son Nhat Airport (SGN) lies approximately 20 minutes by car outside the city center, and regulated taxis remain the most reliable, convenient and popular form of transportation to get you to your hotel. Alternatively, you can arrange in advance with your hotel to have a car meet you at the airport.