As a country, Brazil retains a certain sense of mystery, perhaps due to the huge distances its territory covers and the variety of cultures and landscapes it contains. From the deepest Amazonian rainforest to megacities home to tens of millions of people, this South American nation has it all. The descendants of Portuguese colonizers and African slaves were joined by German farmers and Japanese workers who arrived in the early 20th century, and ensuing waves of immigration left the country with a rich cultural tradition. The traces of these distinct cultures still exist all over the country, combining to make Brazil the fascinating destination it is today. Modern-day Brazil has suffered significant political unrest, with the fallout from a huge corruption scandal leading to calls for the impeachment of President Dilma Rousseff this year. Large demonstrations are not uncommon, and visitors should be aware of potential disruption. While the political power resides in the capital city Brasília, the business community largely centers in São Paulo. Business travelers will likely have meetings in this megacity, and its sprawling streets can seem unwelcoming at first. If you give the city a chance, however, it will reward you with outstanding food, art and culture to rival the best in the world while retaining a distinct Brazilian charm. With an estimated 20 million inhabitants, São Paolo is home to the largest population of Japanese outside of Japan and the biggest community of Italians outside of Italy — to say nothing of the sizeable Arab community and an estimated 1 million people of German descent. The best of these diverse cultures can be found on each street corner, and the city is renowned for its acceptance of the LGBT community. 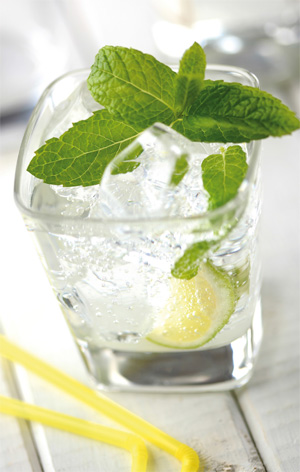 Hit the coffee shops, bars and restaurants at any hour of the day; São Paulo is truly a 24-hour city. Try out D.O.M., which received two Michelin stars for Chef Alex Atala’s imaginative use of sometimes underused Brazilian produce. Atala is famous for sourcing ingredients, some of which the chef himself discovered in the Amazon rainforest. D.O.M. embodies the marriage of traditional Brazil with the metropolitan city of São Paulo. Alongside a buzzing culinary scene, São Paulo is considered the cultural capital of Brazil. It boasts hundreds of contemporary art galleries and theaters, but it is the Museu de Arte de São Paulo that stands among the heavyweight cultural institutions of the world. With a collection that includes works from Manet, Rembrandt and Botticelli, it is not hard to see why critics say MASP houses the best collection of Western art in Latin America. For architecture buffs, it is worth mentioning the building that houses the museum is considered a masterpiece of Modernism, designed by Lina Bo Bardi. After the sensory overload of São Paulo, take a trip to the idyllic island of Ilha Grande some 280 miles away. It’s a far cry from the traffic-choked streets of the big city, with no cars allowed on the island. This former pirate’s lair later served as a leper colony and a jail for political prisoners, remaining untouched by tourism for many years. To give you an idea of the isolation, there are no ATMs on the island, so be sure to bring enough money for the duration of your stay. The only form of transportation is boat, which will take you from your hotel in the village of Abraão to one of the unspoiled beaches. Check into the luxurious boutique hotel at Vila Pedra Mar and wake up to amazing views over the water before hopping into a boat to Lopes Mendes or Dois Rios Beach. The former regularly features on lists of the best beaches in the world, while it’s not uncommon to have the latter to yourself, making for a perfect relaxation spot. You can hike between the beaches if you feel particularly active, or take a cruise around the circumference of the island, stopping off at various beauty spots. After a boat ride back to your hotel, watch the sun descend over the water as you listen to the sounds of howler monkeys. Indulge in a caipirinha — a ubiquitous cocktail of a sugar cane spirit known as cachaça, limes and ice, topped off with mint leaves — before heading into Abraão for some food. Check out Lua e Mar for the chance to eat fresh seafood right on the beachfront; many of the tables are set directly on the sand. Relaxed and refreshed from a few days of island life, it’s time to head off to one of the most famous destinations in the Southern Hemisphere. No trip to Brazil would be complete without a visit to the iconic city of Rio de Janeiro, just 93 miles from Ilha Grande. The upscale area of Leblon offers some of the finest accommodations in town, just a stone’s throw from one of the most famous stretches of sand in the world. Immortalized in song and thousands, if not millions, of photos, Copacabana is an absolute must-see. Stroll along the beach marveling at the locals as they indulge in beach volleyball and beach soccer, and gaze up at two of Rio’s most famous landmarks. 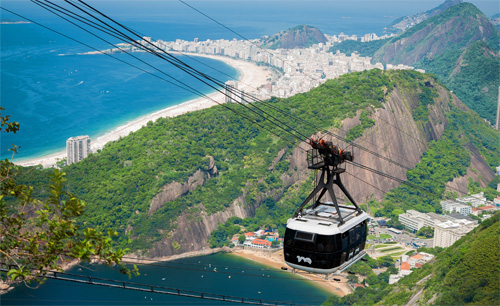 The statue of Christ the Redeemer and Sugarloaf Mountain are two of the most visited attractions in Brazil for good reason. Construction of Rio’s Christ the Redeemer finished in 1931, and the statue measures about 98 feet in height, not including its pedestal, with arms that span 92 feet, making it a truly impressive sight. While you can’t climb to the top of the statue itself, the viewing platform around it offers amazing views over the city of Rio below. The city is obsessed with soccer, as is the rest of Brazil. Even non-soccer fans have heard of great players such as Pelé and the historic achievements of the Brazilian national team. For those who wouldn’t traditionally choose to watch a full game, going to a soccer stadium in Brazil is more of a cultural experience than a sporting one. Try to catch a Flamengo game at the Maracanã Stadium, a huge 78,000-capacity bowl built for the 1950 World Cup. Today it plays host to Brazilian league matches that are a riot of color and noise, especially when Flamengo plays its rival Fluminense. If you find yourself in Rio during the month of February, make sure to join in the famous Carnival celebrations. Nearly 1 million people flocked to the 2015 edition of the singing, dancing and drinking extravaganza which offers a truly unique experience. Get tickets to the Sambodromo, a long stadium through which hundreds of floats and samba dancers pass, or take in one of the smaller parades that take place around the city. From Michelin-starred restaurants to raucous Carnival parades via secluded jungle beaches, a trip to Brazil abounds with unique experiences that set this business trip apart from all the rest.

Guarulhos International Airport (GRU) serves as the international hub for São Paolo and lies about 15 miles from the center of the city. Several companies offer airport transfers, and taxis are ubiquitous. Other companies also offer transfers to Ilha Grande from São Paolo, which involve a shuttle bus and then a 40-minute boat ride from the town of Angra dos Reis. Make your way back to Angra and take a shuttle bus to Rio de Janeiro. At the end of your trip, fly out of Galeão International Airport (GIG), about 12 miles from the center of Rio.