LONG KNOWN FOR ITS educational institutions and storied history, the once-staid city of Boston morphed into a high-tech, intergenerational innovation hub. It’s a magnet for international business, a mecca for futuristic startups and a hot spot for millennials to work and play. Last year, General Electric Co. named Boston as its new headquarters city and is building a $100 million complex for 800 employees in the burgeoning Seaport District. This fall, Reebok will relocate its headquarters and 700 employees to the Seaport District’s Innovation and Design Building, with amenities that range from a 30,000-square-foot gym to a farm-to-table café. Add to the narrative that the former warehouse building also houses the offices of MassChallenge, a global nonprofit startup accelerator that helped launch more than 1,200 early-stage entrepreneurial initiatives, and you begin to understand Boston’s new DNA.

The Seaport District, located on the waterfront in South Boston, is the city’s fastest-growing neighborhood. It’s a mixed-use area with a cross-pollination of industries, new restaurants and retail space, historic warehouses converted to both residences and offices, and from-the-ground-up new construction. The 516,000-square-foot Boston Convention and Exhibition Center is located here, and three new design-forward hotels — the 330-room Aloft, 180-room Element and 136-room Envoy — offer stylish digs for executive business travelers. However, in such a popular meetings and convention destination, hotel inventory often falls short of demand. A $550 million Omni hotel complex that gained final approval in April will help the situation. Located across the street from the convention center, the hotel will be one of the city’s largest, with 1,050 guestrooms; 110,000 square feet of meeting space; a spa; indoor and outdoor pools; and possibly even a skating rink. Construction is scheduled to begin next year, with an expected 2021 opening. More new hotel announcements in the area are imminent, says Patrick Moscaritolo, president and CEO, Greater Boston Convention & Visitors Bureau. “I see the hotel supply in the Seaport District growing by close to 2,000 rooms,” he says. 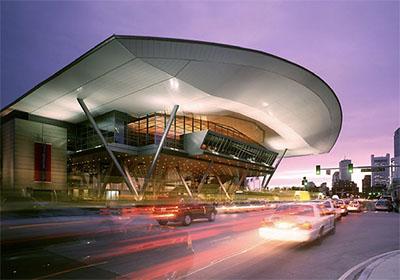 Another dynamic new neighborhood is Kendall Square in Cambridge. Home to Harvard and MIT — and some of the brightest minds on the planet — Cambridge is considered part of the Boston metropolitan area although it’s technically a separate city. Projects such as The Engine, an MIT initiative that recently raised $150 million to finance “tough tech” startups in the fields of biotechnology, robotics, manufacturing, medical devices and energy, brought a remarkable cluster of visionary companies to Kendall Square. Now the streetscape is about to be transformed with a major mixed-use project. Six commercial and residential buildings, combined with open spaces and retail venues, are being designed to give a distinctly Boston sense of place to this expanding innovation hub. “Our knowledge-based ecosystem ties together research, innovation, emerging technologies and entrepreneurs across the Boston and Cambridge region,” notes Moscaritolo. “This is what defines the new economy of our city.”

Tourism is booming throughout greater Boston. Total visitor spend in 2015 was a whopping $12.7 billion, according to the U.S. Travel Association. Airport statistics show significant increases in both the number of flights and the number of passengers at Logan International Airport in 2016. Over the past five years, 17 new non-stop international routes were added at Logan, most recently Avianca’s inaugural airlift between Boston and Bogotá, Colombia (BOG), in June. “We’ve become a global destination,” says Moscaritolo. “This is also reflected in Boston’s population of international students, which has seen a 54 percent increase over the past six years to more than 59,000 — only New York City has more.”

Founded in 1630, Boston is known for some of the most beautiful historic buildings in the country. It’s a great walking city, and tourists often stroll the 2.5-mile Freedom Trail of colonial sites that tell the story of the American Revolution. These days, a layered vibe of history and hip animates the streetscapes, where modern amenities like food trucks juxtapose with centuries-old architecture. Residents and in-the-know visitors often walk or cycle along the Rose Kennedy Greenway, a 1.5-mile string of downtown parks atop a highway tunnel. The Greenway passes along many city neighborhoods including Boston’s evolving waterfront, and in the summer it buzzes with festivals and food trucks.

Above all, Boston is a city of neighborhoods. From Beacon Hill to Back Bay, from the North End to Fenway, from the Seaport to Kendall Square, each has a distinct personality. Iconic city hot spots are popular choices for business events, with projects like an $80 million renovation to the spectacular Boston Public Library adding new options. New construction going up all over town is transforming the skyline and gentrifying once-downtrodden areas.

“Our extraordinary array of educational institutions drives the entrepreneurial initiatives, innovation hubs, housing developments and cultural activities that are the underpinning of our booming economy,” says Moscaritolo. “There’s so much new development that I often say the crane has become Boston’s official bird that you see across the sky.”

There’s usually heavy traffic in and out of Boston, but the rocky coastline views and quintessentially New England towns within an hour’s drive from the city are worth waiting for. Head north on Route 1A along the shoreline for spectacular coastal vistas, stopping along the way to stroll historic Massachusetts seaports like Gloucester and Rockport. Gloucester is defined by the ocean and its roots as a whaling and fishing port, with a working waterfront more than 400 years old. Rockport is a historic seaside village known for its art galleries, shops and restaurants.

A bit farther up the coast, about 40 miles from Boston, lies the trending town of Portsmouth, N.H. Best explored by foot, this small seacoast city resonates with charming brick sidewalks, boutique shops, a thriving arts scene and a wide array of chef-driven restaurants. It’s also home to some of the earliest colonial architecture in New England. Don’t miss the outdoor history museum Strawbery Banke, the 1878 Music Hall theater and the African Burying Ground memorial park honoring long-forgotten slaves found buried under the pavement. Stop by the information-filled welcome center at Discover Portsmouth to pick up a map and learn about happenings around town.