Pop-up Kitchens on the Patio

A couple years ago I made a resolution to try more restaurants. Since opening about a year ago, Sketchbook Brewery and Taproom has made that goal a lot easier by bringing other restaurants to me.

Sketchbook has featured many area restaurants through pop-up kitchens or food trucks. It’s a great way to sample house specialties of other local eateries while enjoying the large selection of home-brewed beers.

Photo courtesy of NaKorn and Sketchbook Brewery and Taproom.

Yesterday, Comida Cantina brought two kinds of tacos. The smoked turkey included green mole, shaved red onion, grape tomatoes and creamy romaine slaw. The other taco had wood-grilled summer vegetables, cauliflower queso, arugula, salsa fresca and pickled bell peppers. I tried one of each. Since I was undecided on which one was better, I had to go back and try each again. I’m still undecided . . . but not complaining.

Sketchbook regularly introduces new beers into their beverage lineup. A recent favorite of mine is Apfel Ale, a beer/cider hybrid based on Stephen King’s fictional Graf brew. Twelve apple varieties make it light and refreshing. Freedomish is another excellent new beer. A hibiscus saison with orange peel, it was brewed to commemorate Juneteenth, with 100 percent of the profits going to Skokie United and Evanston Present and Future. 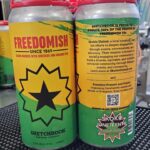 I am trying all these new foods and restaurants, and the best part is I can enjoy all the food and refreshing beverages two blocks from my place on Sketchbook’s beautiful new patio. It’s a great way to spend a summer night.