WHILE IT DATES FROM the 12th century and ranks among UNESCO World Heritage sites, Bryggen is no dry historical attraction. This lively Bergen neighborhood of 100-plus shops, galleries, restaurants and museums — and the Radisson Blu Royal Hotel — buzzes all day long.

Bergen, Norway’s second-largest city, was the biggest city in all of Scandinavia during the Middle Ages when this waterfront area served as the epicenter of commerce in the region. A hub of the Hanseatic League, a network of German traders occupied buildings on this wharf (bryggen means “wharf ” in Norwegian) around 1360 and stayed for nearly 400 years.

A fire in 1702 leveled the wharf, which was quickly reconstructed. Most of the colorful wooden structures of Bryggen today date from that era, some 60 buildings standing four or five deep from a promenade along the waterfront. They form a welcoming maze of businesses: artists’ workshops and galleries such as Atelier Hetland, specializing in prints and paintings, and Juhls Silver Gallery, crafting jewelry inspired by the Norwegian tundra. 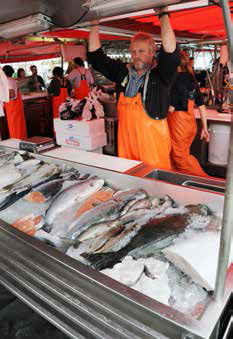 Guided walking tours of the neighborhood start from the Bryggen Museum, constructed over the foundations of its oldest buildings and showcasing artifacts from archaeological excavations, including ceramics from Egypt and glass from China. The Hanseatic Museum and Schøtstuene, in a building dating from 1704, contains original furnishings from the Hanseatic era when 2,000 men worked and lived crowded together in a jumble of warehouses and sleeping quarters. Exhibits illustrate the vast geographic reach of the Hanseatic League that made its fortune in Bergen on salted cod. Ships full of the dried fish set sail for the Catholic countries of Europe to supply meatless meals.

Fish still ranks high among Norway’s exports and finds its way onto plates in restaurants across the country. Bergen’s oldest fish restaurant, Enhjørningen, occupies a building once owned by a Hanseatic merchant in Bryggen. Across the harbor stands the Fish Market, selling not only an amazing selection of seafood but also flowers, fruit and vegetables. Enjoy lunch at a table with a view of Bryggen’s colorful façades reflected in the water.