In 2017 Lonely Planet named Adelaide’s West End one of the coolest neighborhoods in Australia. More recently, in a study of 140 global cities, Adelaide ranked No. 3 for best lifestyle on The Economist Intelligence Unit’s 2021 Global Livability Index. Located on the west side of Adelaide’s thriving Central Business District, it appears this sun-splashed neighborhood only improves with time. 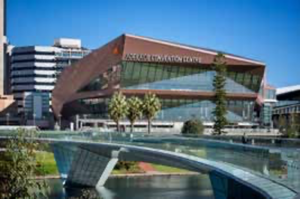 If all this sounds like a cluttered and noisy neighborhood, it is not. Greenery surrounds all four sides of the CBD and its 27,000 residents, with the River Torrens (Karrawirra Parri) on the north and four square miles of city parklands hugging the other three sides like a gorgeous green necklace.

The West End boasts an eclectic mix of residential addresses with modern townhouses and apartments, historic mansions and nicely restored workers’ cottages on the smaller streets and laneways. Almost every type of service lies within walking or biking distance, thanks to Adelaide’s mid-19th-century founders who, purposely or not, created a “15-minute city” lifestyle today’s urban planners can only dream about. Fortunately, Adelaide’s city planners never messed with the original scheme, and about 37 percent of employed neighborhood residents walk to work.

The area welcomes visitors with an enjoyable, energetic vibe. The West Oak Hotel, established in 1838, is the city’s oldest continually licensed venue. No longer a hotel, it offers a beer garden, music, pub food and tapas. Take time to sample the extensive and legendary drinks menu at the Pink Moon Saloon. Cry Baby provides a jukebox filled with 1960s to 1980s rock ’n‘ roll, a good whiskey bar and a packed dance floor. The Adelaide Central Market building opened in 1900 and now houses one of the largest covered fresh produce markets in the Southern Hemisphere, offering locally grown fruit and vegetables, meat, poultry, seafood and beautiful hand-painted murals on the façade.

While the state of South Australia spans 379,724 square miles (roughly the size of Texas and Arizona combined), the West End conveniently sits midway between the cooler temperatures and wineries of the Adelaide hills and the warm beaches west of the city, where sun worshipers and surfers gather year-round. Even Adelaide Airport lies only three to five miles from all West End locations.