A Century of Play

OF THE EARLIEST GOLF CLUBS in the United States, Philmont Country Club opened in 1906 when prominent business- men with nationally recognized names like Gimble and Strawbridge decided to build a country club. Its location on the Reading Railroad line made it easily accessible to the titans of Philadelphia industry. Originally offering nine holes, the course expanded to 36, consisting of the North and South courses. Concert Golf recently purchased Philmont, infusing much-needed capital and infrastructure improvements to enhance the North Course.

Unfortunately, long before Concert took over, the South Course was left to seed. The influx of cash will allow for significant pruning and removal of overgrown trees and replacement of the bunkers back to the 1923 design revisions of Willie Park, Jr. Park, a prolific golf course designer, ball and club manufacturer and golf writer, twice won the U.S. Open. His Sunningdale Old Course southwest of London is considered one of the best in the world.

When Philmont celebrated its 100th anniversary, it produced a wonderful commemorative book (Philmont Country Club: The First Hundred Years), which I read from cover to cover.

I teed up on a fall-like summer day, June 14, with Chris “Yammi” Ottaunick, Lucky Bob Hancock and Paul Gosselin to see what Philmont had in store for us. After an enjoyable lunch in the clubhouse grill, we hit a few balls on the driving range and headed to the course.

HOLE 2 | 415 yards, par 4
At the tee box, and without prior course knowledge, you face a daunting narrow fairway — even before you know about the pond you must carry to hit the green in regulation. We were all happy with our tee shots, but Bob and I sank our second shots in the drink. Yammi and Paul were the stars even though the best score was a 5. This would be a good redo hole with our new course knowledge.

HOLE 3 | 160 yards, par 3
After licking my wounds from the previous hole, I was ready to get my game back, so I quickly teed up and fired away with my 8-iron. It looked like a beauty in the air, but I feared it was too strong. The ball bounced on the green, and I was in line for a birdie. The green sits blind from the tee box, but the multibunkering around the green offers great definition. Paul and Bob struggled while Yammi followed directly behind me with a clear shot to the green. The green undulations took our birdies, but a par satisfied me after my previous lashing.

HOLE 5 | 439 yards, par 4
Paul and I slammed perfect drives, Paul’s passing mine by about 20 yards. The comedy show started when both Yammi and Bob topped their drives, landing on the side of the creek bed just in front of the tee box. Yammi nailed his second shot to get back in the game. Bob, on the other hand, hit the creek bank and then with an impressive 3-wood landed the ball behind him, beginning a plethora of shot errors. The hole continues uphill with large bunkering around the green. Due to the height difference, it is impossible to see the surface of the green from the fairway, but it is rather large. Yammi and I pulled out bogeys, his more impressive due to his start, and Paul’s second shot to the green went wild and a little left, stealing his chance for par.

HOLE 9 | 574 yards, par 5
As our closing hole, this one really beat us up! It’s impossible to get to this green in two. The fairway turns to the right in a severe dogleg with the green tucked in further to the right. To make matters worse, the fairway is narrow with an abundance of tall trees lining either side. I clipped a tree on the right, sending me on a downward spiral. Paul slammed one left, knocking around the trees on that side. Yammi and Bob hit square drives but too far right to help them get around the corner as the hole climbs up toward the clubhouse. No history books written here, with two bogeys and two double bogeys. I am not sure we could have done better even with course knowledge. Willie Park is laughing at us for sure. 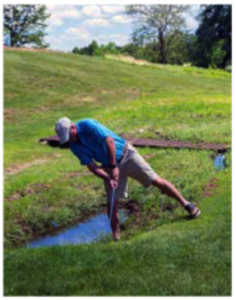 HOLE 11 | 245 yards, par 3
Coming off 10, we were warmed up and raring to go. I teed up first and sailed my 5-wood to the green, much to the surprise of the group. This long par 3 to a slightly elevated green from an elevated tee box features traps guarding the left and right front sides. The green is large, so you have a big target. Yammi decided the green was not large enough, though, so he launched a ball left and onto the tee box of Hole 12, starting a succession of hiccups that turned a par 3 into a par 6. The rest of the team came up a little short, ending with respectable bogeys while I missed my birdie putt for a par.

HOLE 14 | 488 yards, par 4
This sizable par 4 runs uphill to the green. Carding a 5 on this hole is an achievement which three of us accomplished. The dogleg turns right a little early in the fairway, making the drive crucial. Securing par requires a combination of landing your tee shot in the right location, left of the fairway, and then launching your approach more than 200 yards. We all came up short, but our chipping skills got us back on the board on the second-most difficult hole on the course.

HOLE 18 | 394 yards, par 4
The finishing hole on Philmont offers a striking view of the clubhouse. Unfortunately, my ball striking was not up to the view. I took my drive way too right … but not in the trees and reach- able to the green. Of course, Yammi and Bob decided to drive the carts all over, looking for their balls which were a little farther and to the right. While lining up my shot, I should have regrouped as I could clearly see Yammi in my peripheral vision — resulting in a lousy shot which I immediately blamed on him! A couple of chips later I was on the green and we were putting. Keep in mind the fairway runs left to right, so most balls off the tee end up on the right side. The green is one of the smallest at Philmont, so accuracy (and not playing with Yammi) is key.