WE’RE STAYING IN İZMIR, more or less. Our home for two months is an apartment in the district of Karşiyaka, where the inhabitants refer to themselves as “35.5” — a wink to the official İzmir postal code, 35. We regularly take the 10-minute ferry ride across the Gulf of İzmir to downtown and back; with each arrival we notice the change in atmosphere, the change in pace.

Our neighborhood is İzmir, and it’s not. The same could be said of the city as a whole. You’ll search in vain for İzmir on a pre-1922 map. Until that cataclysmic year, the city was known as Smyrna, with an indigenous population of Greeks and Levantines. The Greco-Turkish War culminated with Smyrna in flames and the mass expulsion of the survivors. The present city emerged from the ruins.

Few of the current population can truly claim to have roots here. In most introductory conversations there’ll be mention of somewhere else. Our optician’s family came from Crete; a businessman we know has family ancestry in Ukraine and the Balkans. All were caught up in the upheaval of the 1920s, when Greeks and Turks across the region were expelled from their homes and sent back to “where they came from.”

The result in İzmir is a city that suffered a complete historical fracture. There’s the city as it was before 1922 … and after. Remarkably, despite an almost complete population transfusion, its uniquely independent spirit survived. Smyrna was known as the “City of Infidels,” and the nickname transferred to İzmir. In an increasingly Islamist country, İzmir remains liberal and secular.

For 8,500 years settlers here benefitted from the advantages of geography. The Gulf of İzmir, now enfolded by the city on three sides, provides sheltered anchorage for trading vessels. And the city’s location on the coast of the Aegean Sea, with easy routes into the Turkish interior, puts it at the fulcrum of trade between Europe, Asia and Africa.

This is one of the first places in the world in which money supplanted the bartering of good as the means of transaction. You could make a good case for the city’s thriving bazaar being the birthplace of capitalism. The bazaar still thrums with commercial energy. During the day the mazy web of alleys is dense with local shoppers buying clothes, fabrics, furnishings, metalware, cellphones, computers, fish, meat, fruit and vegetables. Amid it all you’ll find stalls selling freshly squeezed juice (my daily favorite is Atom, less than 20 cents for a glass of a refreshing, tropical mixture) and restaurants offering oven-baked pide (Turkish pizza) and kebabs. 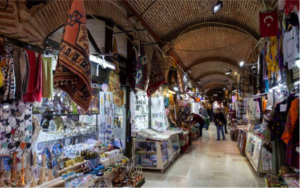 While rooted firmly in the past, İzmir’s economy also made bold strides into the future. İzmir Port remains one of the region’s busiest, while close to the airport lies the Aegean Free Zone, an international venture promoting sectors such as aerospace and defense, automotive production, food processing and electronics. The city’s relatively modest skyline recently transformed close to the port with a cluster of skyscrapers, including the 48-floor Mistral Office Tower and the twin Folkart Towers.

At night, huge screens incorporated into the façades of the twin towers show digital images of fluttering Turkish flags. We can see them from the ferry as we cross back to Karşiyaka. The pride of our fellow passengers is evident — proud of their neighborhood, proud of being Turkish and, above all, proud of İzmir.

CHECKING IN WITH JEREMY SEAL: Author and tour leader

What are the main cultural dos and don’ts for American visitors to Turkey?

Turkey remains a remark- ably tolerant place, even now, and has been used to a (generally respectful) American presence since the country joined NATO in the 1950s. The native friendliness should be taken at face value — invitations to local homes are invariably sincere, when gifts like boxes of baklava are welcome. There are a few rules, of course, like behaving appropriately in the mosques — taking off shoes, women donning headscarves upon enter- ing and probably avoiding prayer times, especially on holy Fridays. Otherwise, this is a country in which one should feel confident about immersing oneself, whether it be in visiting the Turkish baths, traveling on the (excellent and generally extensive) public transport networks or having a go at the notoriously difficult language. Turks are invariably helpful so don’t be afraid to ask. Be aware the interior is much more conservative than the big cities; drinking alcohol in public is frowned upon in many places, and hard to get at all in cities like Konya.

How does İzmir differ from other Turkish cities?

İzmir was always the city of the infidels: home to Greeks, Armenians and other Christian minorities all through the Ottoman Empire. The legacy of those people, all now deported, dispersed or otherwise disappeared, is a distinctive atmosphere that can seem strikingly un-Turkish. The city has lately become a magnet for refugees from Africa and the Middle East who have made their home in the neighborhoods around the Basmane Train Station. While much restoration work has been done, with a major land reclamation scheme all along the front, it still feels ruinous, and sometimes spectacularly so, especially in the back streets between Basmane and the archaeological museum.

What are your favorite things to do in the city?

The archaeological museum is a wonder, especially for its collection of amazing ceramics and the gallery of Greco-Roman statuary. I like taking the tram that runs along the waterfront and up to the stations at the north side of town, an area rich in moldering old warehouses. The city has one of the most exotic of all bazaars, Kemeralti, a warren of lanes full of intoxicating smells and stalls that for sheer authentic impact leaves İstanbul’s Grand Bazaar behind.

What side trips do you recommend?

İzmir is brilliantly located for trips south to the great ancient archaeological sites. My favored route is taking the regular and superbly cheap train service from Basmane to Selçuk for Ephesus, even continuing on up the Meander Valley for sites like Magnesia, Nysa, Laodikeia and Hierapolis, the last home to the amazing travertine formations at Pamukkale. For beach-going, Bodrum’s a four-hour journey away by efficient and regular bus.

Kadifekale Castle, atop a high hill behind downtown, makes a logical starting place for your visit. Here you can get some sense of the city’s complex history (Alexander the Great built the original castle, with subsequent additions by the Romans, Byzantines and Ottomans), as well as breathtaking views of the city and the Gulf of İzmir. The castle ruins feel neglected, but admission is free.

Enjoy another free view from the top of the Asansör, a public elevator built in 1907 to save the residents of a hillside neighborhood a steep walk up 155 steps. The viewing platform at the top of the elevator’s tall, brick tower offers a panorama of the waterfront.

Two museums exhibit some of the treasures excavated from sites in and around İzmir. The Archaeological Museum of İzmir and the İzmir Museum of Art and History both display impressive collections of Greek and Roman statues, pottery, mosaics and gold jewelry. The Ataturk Museum is devoted to the life of the founder of modern Turkey, Mustafa Kemal Ataturk. Venerated in İzmir (where his mother was born), his image appears everywhere. My favorite museum is the Ahmet Pristina City Archive, housed in the old Art Deco fire station. The exhibitions change every few months and explore specific aspects of İzmir’s history, such as transport and sports.

Public transport (ferries, metro, trams and buses) makes it easy to get around the city. Buy an İzmir Card (available from ferry terminals and metro stations), and then top it up whenever you need to from the machines (there are instructions in English). Three ferry terminals on the downtown waterfront offer regular departures across to two terminals on the other side of the Gulf of İzmir, Karşiyaka and Bostanlı. There aren’t many tourist attractions on the other side, but there’s a beautiful walk along the miles-long waterfront park, and the neighborhoods contain plenty of shops and restaurants.

The essential excursion from İzmir is to the ancient Greek city of Ephesus, which you can reach by taking the train to Selçuk from Basmane Railway Station (the journey takes 80 minutes). From Selçuk shuttle buses go to Ephesus, or you can walk (it takes about 40 minutes).

The ruins of Ephesus are among the most impressive in the Mediterranean: a sprawling city, complete with paved roads, the remains of houses, an ancient public toilet, an amphitheater and — most impressive of all — the Library of Celsus, an ornate façade built by the Romans. Here, as so often in Turkey, history vividly comes to life.

COMING AND GOING
All U.S. citizens require a passport valid for at least six months beyond the date of entry. An entry visa is required; visit the website of the Embassy of the Republic of Turkey for the latest information. In most cases an e-visa can be purchased online, usually valid for up to 90 days within a 180-day period. The current cost is $20.

OFFICIAL LANGUAGE
Turkish. English is not widely spoken beyond the international hotels.

EQUINOX
The Swissôtel’s flagship restaurant provides the perfect venue for business dinners or special oc- casions, offering an international menu and a great view of the Gulf of İzmir from the ninth floor.

KÖFTECI MEHMET IRMAK
Our regular restaurant, located beside Kemeralti Mosque in the bazaar, is great for grilled chicken and for piyaz, a local bean salad.