A RECENT ADVERTISING CAMPAIGN by the San Francisco Travel Association carried a rather attention-getting line: “San Francisco’s gay neighborhood is called San Francisco.” And that pretty much sums up the appeal of this city by the bay with LGBTQ travelers.

“San Francisco has been ground zero for much of the struggle for LGBTQ rights,” said Joe D’Alessandro, president and CEO, San Francisco Travel Association. “This is the birthplace of the rainbow flag and the AIDS Memorial Quilt. San Francisco was the first city in the nation to recognize same-sex marriage and hosts the largest Pride Festival in the nation. In 1977 Harvey Milk became the first openly gay elected official.” 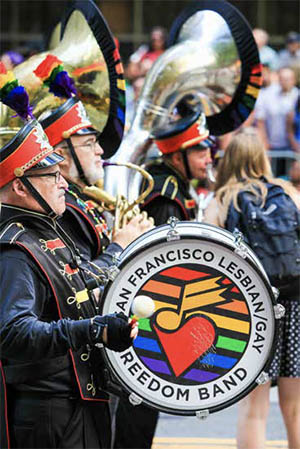 Indeed, San Francisco has lots to offer LGBTQ travelers. D’Alessandro’s advice to visitors: “First of all, relax. You are in the most gay-friendly city in the world. Here, individuality is celebrated, so experience being in the company of the most diverse and creative community around.”

The San Francisco Travel site offers a variety of LGBTQ itineraries and recommendations to satisfy different types of travelers, from foodies to fashionistas. The most legendary neighborhood for the LGBTQ community, of course, is the Castro, one of the nation’s first true gay neighborhoods. It’s still a great place for a drink or a night out, and it’s also home to the GLBT History Museum, which documents the struggle for equality.

In addition to the annual pride event, which takes place at the end of June, San Francisco also hosts several other popular annual LGBTQ festivals, including the Folsom Street Fair, billed as “the world’s largest leather event,” in September, and the Frameline LGBTQ Film Festival, which brings a variety of noteworthy films to local screens in June.

As the tourism office loves to proclaim, everything in San Francisco is gay-friendly. But if you’re looking for small-scale, gay-owned accommodations, one of the best choices is the Parker Guest House, a 21-room hotel located in the Castro, with lovely Edwardian architecture and tastefully decorated guestrooms. For larger-scale luxury, the Grand Hyatt San Francisco and Hyatt Regency San Francisco are both members of the International Gay & Lesbian Travel Association. San Francisco-based Joie de Vivre Hotels is another good gay-friendly option with several properties in the city, including Hotel Rex, a centrally located Union Square hotel graced with contemporary art, and the hip Phoenix Hotel, located in the Tenderloin district. In San Francisco, as the slogan implies, you’re staying in a gay area no matter where you are.