While the space housed other trendy spots in the past, it is now a dynamic microcosm of Palm Springs in the hands of architect Michel Abboud. The space features industrial canvas and high ceilings to architectural ceiling-height private booths, open-concept kitchen, diverse seating configurations and a bar that vibes as the chicest produce stand this side of the Coachella Desert. It is here capable bar and kitchen teams led by Chef de Cuisine Vinson Ching pull together food and cocktails bridging the French epicurean refinement Beckman mastered in his early career to locally sourced produce and the global flavors embraced by Los Angeles diners seeking out fresh dining concepts.

Six weeks after it opened (Aug. 12, 2022), it was a fitting site for Visit Palm Spring’s annual media gathering, which previewed what would be pushing the destination into new directions while staying true to Palm Spring’s architectural and lifestyle roots. This corner of the oasis in Los Angeles, however, holds its own beyond its conversation-starting ambiance, with drinks and dishes delivering what the concept promises. Starters like the addictive Sonoran sourdough rolls; Crudo (dry-aged compachi, dashi, pickled grapes, radish, citrus fern, chive oil); and honey-drizzled, chicken-fried oyster mushrooms (served with butter pickles and herbed buttermilk sauce, and also wildly popular in Palm Springs) show what magic can happen when high concept takes on popular California fare is done with care and intention.

A fresh salad, like the Coleman Farms lettuces bowl with yuzu vinaigrette, serves as a palate cleanser, while a starter that may sound too trendy for its own good (a heirloom tomato salad floating in a melon gazpacho) actually works; the different fruits and vegetables in its composition complement one another. However, the main dishes are stellar because the flavors are delicately balanced, while overall creations are satisfying.

The Masami Ranch New York steak gets an edge from a fermented honey and horseradish cream, while the halibut with Thai flourishes has an unexpected extra boost of flavor and heat not found in similar dishes elsewhere. The Middle Eastern-inspired torte Medovic, a honey sponge cake tempered with a touch of huitlacoche ice cream, is also surprising. And if there are vegans in the group, a good-sized selection of plant-based selections will serve them, as well. 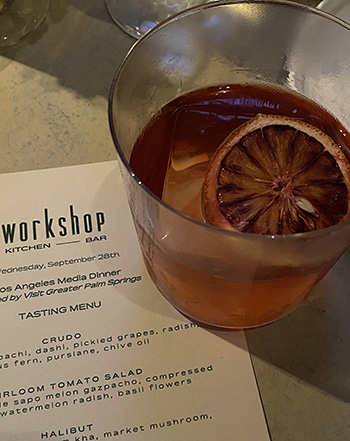 If you come in just for the cocktails and some bar snacks, bar director Jessi Lorraine sees to it that the vision for the kitchen is firmly in place at the bar. While straightforward classics like the Kitchen Sink Martini and Negroni California feature playful twists through use of local produce, originals like the Queen of Hearts (the love child of a margarita and a Champagne cocktail), the Tom Collins Hoax (with matcha-infused gin and basil eau de vie) and the Sherry Cobbler (a globetrotting treat with Oloroso and East India sherries and Armenian brandy) merit a return visit.