Warsaw, the capital and largest city in Poland, was once known as “The Paris of the North” for its wide, tree-lined boulevards and beautiful Baroque buildings. During World War II, however, more than 85 percent of the city’s historic center was destroyed. Undaunted, the populace rallied and, starting in 1947, began the grueling process of reconstructing the Old Town — brick by brick from the city’s own rubble — into what is now a UNESCO World Heritage site.

Since joining the European Union in 2004, Poland has experienced solid economic growth. The Organization for Economic Cooperation and Development and the International Monetary Fund agree Poland fared relatively well during the COVID-19 pandemic and has good potential for successful, long-term development once the pandemic ends. Green technology is poised for future growth (Poland is the EU’s biggest exporter of electric buses). Wind energy also has a large investment potential as Poland expands its offshore wind farms. Other sectors such as life sciences like biotechnology, genetics and pharmaceutical chemistry drive the economy as well.

U.S. firms represent one of the largest groups of foreign investors in Poland. Microsoft, Google, Amazon and Cisco Systems have a large presence as do IBM, Lear Corp., Raytheon Technologies and Pratt & Whitney.

In mid-2020 the Polish Development Fund and Dealroom.co reported Poland is the leader in Central and Eastern Europe for investment in startups. Marcin Zabielski, managing partner, Market One Capital, said, “There is no surprise that Poland became a vibrant startup scene, having access to domestic seed capital, experienced founders and top-notch developers.”

Most major carriers fly to Warsaw Chopin Airport. LOT Polish Airlines (founded in 1921 and one of the oldest in the world) offers the only non-stop (8.5 hours) from New York’s JFK. From the airport to city center take the SKM or SM trains (every 30 minutes) or book a cab at one of the taxi counters in the airport. Uber, wildly popular, works with the cash-free app you probably already have on your phone — equally useful for getting around the city. 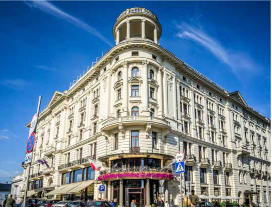 Most people in business and the service industry speak English, but you should know a few basic phrases in Polish, especially “good day” (dzień dobry, pronounced jen-DOH-bree), a cheerful greeting to everyone you meet: business colleagues, store clerks, hotel and wait staff, taxi drivers … you get the idea. You may not get the pronunciation quite right, but your effort will be much appreciated.

Early morning meetings are not particularly popular in Warsaw unless you’re staying at one of the luxe hotels where one can enjoy a quiet, white-table- cloth breakfast. However, the city does love a good cup of coffee, and you’ll find a café on nearly every corner (most are too crowded and noisy to conduct a business meeting). Instead, grab a to-go cup and head to one of the city’s many jogging trails. The prettiest, the 200-acre Łazienki Park, features miles of paths meandering through centuries-old trees and past magnificent Baroque palaces sporting colorful gardens and peacocks in summer.

For an after-work drink, try one of the new wine bars like Rausz (offering more than 80 small-grower wines accompanied by regional cheeses and charcuterie). For beer, locals like PiwPaw, where you can order a tasting flight from a list of more than 300 regional beers.

End your day in the epicenter of Warsaw — on the 30th-floor observation terrace of the city’s still-controversial communist landmark, the Palace of Culture and Science (a gift from Stalin in the 1950s) — for panoramic views of the entire city. Fast-track tickets are available online.