Discover the Beauty and Bounty of Chicago’s Logan Square

A century ago, Logan Square was a destination neighborhood northwest of Downtown Chicago, attracting prospective residents from diverse backgrounds. Its lush, tree-lined boulevards and parks encompassed stately limestone and greystone homes as well as new rental developments. Access to the Chicago River and some of the city’s most important thoroughfares (Milwaukee, Logan, Kedzie and Humboldt) added to its appeal.

Although Logan Square transitioned into a working-class area in the mid-20th century, by the 1990s a new generation of Chicagoans — entrepreneurs and artists among them — rediscovered its beauty and potential. This successful resurgence of Logan Square continues into the 2020s through its colorful and eclectic food and cocktail scene, boutiques, public green spaces and entertainment venues. Ties to Chicago’s history, meanwhile, remain intact with its preserved and restored homes, landmarks, parks and monuments. 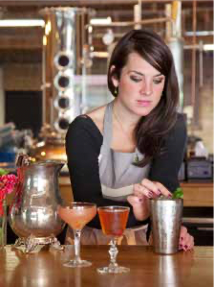 Logan Square gained cachet over the past two decades as one of America’s best neighborhoods for craft cocktail and beer bars, and one can argue The Logan Theatre epitomizes Logan Square’s entrepreneurial spirit. The 1915 movie house has been reinvented to include a cozy bar and lounge along with its arthouse screening room (site of the Chicago Underground Film Festival), and being referred to as “The Logan” by residents underscores its coolness factor. Other top bars include Bixi Beer, woman-owned Chicago Distilling Company, Cole’s Bar, Estereo, The Moonlighter, Scofflaw, The Owl and Emporium. During the day, Passion House, Sip of Hope Community Coffee Roasters and New Wave Coffee offer prime places to enjoy a coffee, a pastry and some people-watching.

The neighborhood is also heaven for shoppers whose idea of a souvenir does not involve logo T-shirts or refrigerator magnets. While vintage fans flock to Lost Girls, those looking for chic, artisanal finds (clothing, gifts, stationery, personal care and jewelry made by Chicago designers) should check out Shop Small Chicago, Steel Petal Press and Wolfbait & B-Girls; bookstore lovers should not miss browsing the shelves at City Lit Books.