The Greek islands are so iconically picturesque, families seeking fun in the sun sometimes overlook Athens. At first glance, it’s easy to see why. Yes, Athens boasts the wow factor of the Parthenon and the Acropolis, but it’s also a big, crowded city full of traffic and noise, especially compared to the serene beauty of islands like Mykonos and Santoríni. But like most world-class capitals, Athens also features a cluster of neighborhoods, each with its own personality and style, which could make a perfect match for your family. Parents with young children looking to explore the city know their family dynamics best, but generally a little common sense prevails when choosing the right activities. I wouldn’t drag a toddler around archaeological sites, but school-age kids, teens and young adults who like mythology might have to be pulled away from some of the eye-popping examples of ancient art and culture. And because few of us live by culture alone, inviting beaches and plenty of nightlife spark this urban visit. Start at the city center, Syntagma Square, in front of the Old Royal Palace that now houses parliament. Traditionally attired Evzone guards patrol the Monument of the Unknown Soldier, marching in stiff-legged formation with rifles slung over their shoulders. While crowds usually stand by to snap photos of the changing of the guard ceremony, the throng is, thankfully, nothing like the mobs in front of London’s Buckingham Palace. Syntagma Square is not the place to be during political activities such as the demonstrations that took place here during the Greek debt crisis in the summer of 2015; however, each time, the unrest was short-lived and tourists came back in full throttle the next day. The charms of this neighborhood include the shops on nearby Ermou Street, a nearly mile-long pedestrian street with stores ranging from ubiquitous franchises like Zara and H&M to small, individually owned boutiques like Melissinos Art – The Poet Sandal Maker for custom-made Greek sandals. Not only a destination in its own right, Ermou Street winds along some of the other most interesting neighborhoods in the historic center. Save time to browse the shops and flea market stalls in Monastiraki, especially fun on Sundays, where unique vintage finds and historic architecture are sprinkled among the T-shirts and souvenirs. 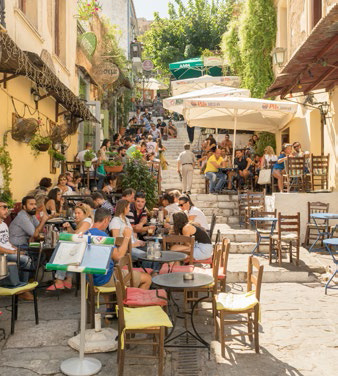 Adjacent to Monastiraki lies Plaka, one of Athens’ most popular — and touristy — neighborhoods. A warren of tiny streets, Plaka is one of the oldest districts in the city, although nowadays it teems with international visitors, mostly intent on shopping and sightseeing. It remains one of Athens’ loveliest districts despite the bustle, where cafés and tiny restaurants vie for space with shops selling everything from leather goods and pottery to jewelry and olive oil. Although shopping forms a big part of Athens’ allure, most people are here, at least partly, for the history and culture. For most of us, that includes tackling the Acropolis at least once, but in order to do so and retain your sanity, it helps to have a few tools in your arsenal. For one thing, consider the potential physical limitations of family and friends traveling with you. Really small children and less mobile grandparents probably won’t enjoy the climb to the top nor the daunting crowds, and the smartest move might be to let them enjoy the view of the Parthenon from below. That said, for those who do make it to the top, the site merits everything it’s advertised to be: ancient, gorgeous, imposing and dramatic. And because of its hilltop location, it offers spectacular views of the city below. Professional guides suggest arriving as early in the day as possible before the tour buses arrive, wear sunscreen, hang onto your hat (literally, as the winds can be ferocious) and plan a meeting place if you get separated.

If you don’t go with a guide, read up on the Parthenon beforehand so you’ll not only know what you’re looking at but you’ll also better appreciate the exhibits at the Acropolis Museum at the base of Acropolis Hill. If you only do one museum in the city, this is probably the one to choose, both for its dazzling exhibitions and for its modern design and interactivity. Probably the top draw is the exhibition of Caryatids, gigantic columns in the form of women from the Temple of Athena, where even your moody teens won’t be able to resist taking selfies. The museum opened in 2009 amid controversy about its location so close to the ancient Acropolis and on top of other architectural ruins, but it’s hard to imagine anyone not being impressed by the exhibits and the views of the ancient shining city on the hill. Young children are not only welcome here but wooed with free activity packs filled with games and activities to help guide them through the exhibitions. Families looking for a respite from the bustle of the Acropolis can try a serene walk through the National Gardens, located just behind the Royal Palace at Syntagma Square. Think of it as Athens’ version of Central Park, although, because this is Greece after all, don’t be surprised to find sculptures, ancient columns and other ruins dotting the nearly 40-acre gardens here and there. Kids can feed the ducks at the pond, let off steam at the playground and wander through the Children’s Library, although be forewarned story time is likely in Greek. If your wish list includes nightlife, the Psirri district just off Ermou pulses with bars and cafés that serve up drinks, small plates and plenty of action until the wee, small hours. A hot contender for best nightlife, including for LGBT locals and visitors, is Gazi, where the bars get so packed partiers spill onto the sidewalks and into the streets. 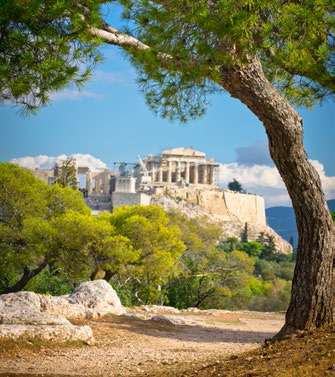 Because the historic district is so compact, it’s nice to set aside some time to move a little further away from city center to experience the city the way the locals do. In the Paleo Faliro district, less than five miles from the Acropolis along the southeast coast, families can snag an interactive seat at the Eugenides Foundation Planetarium for a digital star show under the massive dome or catch a movie in IMAX. No self-respecting visit to Greece could leave out a few glorious days at the beach, and if your itinerary doesn’t include a neighboring island, you are still in luck. Just don’t expect beaches with the kind of expansive coastlines you’ll find in Florida, and be aware you’ll pay an entrance fee for the best ones. Astir Beach in Vouliagmeni, about 15 miles along the southeast coast from Paleo Faliro, offers a top choice for families, with such beautiful sand and sea that locals refer to the area as the Athenian Riviera. Amenities include two hotels, known jointly as Astir Palace, as well as restaurants, water sports and even the ruins of an ancient temple of Apollo. Expect to pay about $220 for 10 admission tickets to the beach.

Eleftherios Venizelos Athens Airport opened in 2001 for the Olympics, replacing Ellinikon. Connect to the city via rail, metro, car rental or taxi. Expect to pay about $40 for a taxi ride to city center, with a surcharge after midnight; confirm the fixed rate with the driver. A 40-minute metro ride (trains leave every half hour) links the airport to Syntagma Station, which also connects to other lines, the Athens train and the bus system. Renting a car is not advised for visiting the historic district, but driving along the coastal routes can be beautiful either in a rental car or by taxi. Take a coastal tram to the beach areas of Glyfada, Voula and Faliron.

Where to Stay in Athens

Acropolis Museum Café and Restaurant Come for the casual approach to traditional dining but stay for the eye-popping views of the Acropolis. Dishes change seasonally, and there is a children’s menu. 15 Dionysiou Areopagitou St. $$ Balux Café From sushi to pizza, this café at Asteras Glyfada Beach was designed to look and function like your best friend’s beach house, complete with pool, billiards and cozy living room. 58 Posidonos, Glyfada $$ Hytra Bar and Restaurant This indoor/outdoor restaurant in the Onassis Cultural Centre lives up to its Michelin star, thanks to the inspiration of Chef Tassos Mantis, all within view of the Acropolis. 107–109 Syggrou Ave. $$$