PROUDLY BOASTING ITS CLAIM as the only Jack Nicklausdesigned golf course in Los Angeles County, Angeles National sits at the base of the Angeles National Forest. The 18-hole course offers lovely views and generous fairways and, important in the thirsty California of today, plenty of water, as the greens and fairways were lush and green when we played.

Global Traveler held an outing at Angeles National when we launched some 15 years ago, long before it even built the clubhouse. This year I was the guest of Turkish Airlines for its annual Turkish Airlines World Golf Cup championship, dubbed the widest-reaching corporate golf tournament in the world. The airline hosts tournaments like the one in Los Angeles all over the world, with the winner of each invited to attend the grand championship in Antalya, Turkey, at the end of October each year. Last year 8,000 participants played in 100 qualifying tournaments across 60 countries.

Our foursome included Steve White, GT Globility Board member, and Bill Noonan, a longtime veteran of the airline industry who worked with carriers spanning from TWA to Malaysia Airlines. Before he teed off, Steve made a point of thoroughly reading the tournament rules and listening to the pro’s instructions; it turned out to be vital information to the outcome. Bill and I played a skin game in which we bet $1 per hole with carryovers, which proved enjoyable as well.

HOLE 2 | 562 yards, par 5
As we started our game at Hole 4, Hole 2 was toward the end of the round and where Bill and I really began to have our competition. On the previous hole, I was ahead by $29; there was no way for Bill to win, so I challenged him to a double or nothing bet on the remaining three holes, and he accepted.

This is the longest hole on the course; although listed as the No. 5 handicapped hole, it can be more difficult. Power hitters can shorten it by cutting off the dogleg and carrying the fairway bunker to the landing area. Mere mortals have to play a straight shot and treat it as a true par 5. Errant shots off the tee to the right will find a stand of cottonwood trees. Your second shot to the landing area needs to avoid the bunker on the right. Clearing this bunker offers a clean approach shot to the green. Both Bill and I struggled; I had a terrible third shot from a side bunker and blamed this on bad club advice from Steve. Bill took the hole!

HOLE 9 | 446 yards, par 3
The tournament was played with a shotgun start, so we played the holes out of sequence. We started on Hole 4, so the No. 1 handicapped hole came relatively early in the game. It also was beginning to get hot, at least for those in Southern California; but for guys from Pennsylvania where the summers are blazing and the humidity is near saturation level, it was not a big deal. Nine offers a nice layout with a wide-open fairway but also an arroyo full of brush before the green. I landed left center, shocked at the distance I still had to carry to the green from this position. Bill sliced one with a near chance of staying in, but then it bounced in the brush on the right. Bill found an enormous number of balls in these dry areas prone to snakes — we called him the snake charmer. Steve hit an equally good shot dead center.

From here, it seemed like a long second shot, and I overcooked a utility wood to the top left of the green. Bill continued to charm the snakes while Steve hit a perfect shot on the green. I could feel my wallet growing as I scored a par. 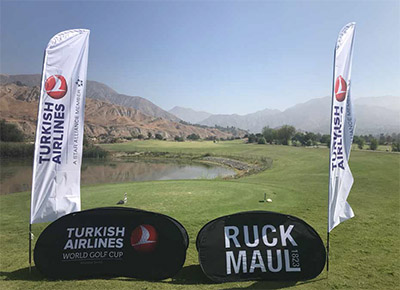 HOLE 10 | 429 yards, par 4
The little pond should not come into play on the left as it is so close, but psychologically it rattles many golfers. Bill skipped one across the pond and somehow made it through the fence. I hugged the left side, never turning enough, and caught the left bunker. Steve hit his typical not-so-fun accurate drive — I laughed as I asked, “Where is the joy in a near-perfect shot?” Bill came back like a champ with a hard 3-wood to the left side but short of the green. I made a fantastic shot out of the sand with a 7-iron, but it came up short. Steve, of course, landed on the green in two. As the competitive energy grew, both Bill and I chipped on and one-putted for bogey.

HOLE 18 | 377 yards, par 4
We thought it was hot before, but the sun came down hard at Hole 18, and we had a slight backup at the tee box. It gave us the opportunity to discuss the best play on 18, a wonderful closing hole with many obstacles. The fairway goes slightly uphill and then crests and returns toward the green. Bill’s tee shot looked great as it headed out left over the brush and wasteland and started turning right. I was sure this would bounce freely to the center of the fairway, but the snake charmer was back and the ball was lost. I killed a ball with the Cobra, straight and true and landing past the crest of the hill to the flat area below. Steve landed short and farther right, nearly in the rough but safe. From here, players must hit an accurate ball to the green, which hugs the left side and a large pond. I took dead aim, struggled about the correct club and launched my iron. I pushed it right, fine, as this is the bail-out area. From here I chipped on for another bogey, as did Steve.

There are many other great holes at Angeles National, but more important is Turkish Airlines’ dedication to educate the world about the fine golf in Antalya. On a final note, I liked the Cobra F6 set so much, I bought the driver, utility woods and some irons, used, online!