The View From Here

DESIGNED BY JACK NICKLAUS, the Manele Golf Course sits on top of an ancient lava outcropping high above Hulope’e Bay. Considered one of the must-play courses in Hawai’i, it includes three holes on breathtaking cliffs where the Pacific Ocean serves as a backdrop … and often as a water hazard. Every hole offers spectacular views, most overlooking Maui and Kaho’olawe. If you are lucky enough to play during winter months, you can see whales from the fairways and greens.

Opened in December 1993, the course offers 18 holes on a 7,039-yard, par-72 layout. The signature hole, No. 12, features a tee box on a cliff 150 feet above the ocean facing the green on the adjacent cliff 202 yards away. The views are so stunning, Bill and Melinda Gates selected this spot for their wedding on Jan. 1, 1994. Manele Golf Course goes hand in hand with the Four Seasons Resort Lanai, which offers convenient transportation between the hotel and the clubhouse.

Besides great golf amenities, including rental clubs and a staff ready to set you up on the driving range, the facility includes a pleas- ant restaurant called Views — a perfect spot overlooking the fairway of the 18th hole where you can relax and reminisce about your game.

Larry Ellison, founder of Oracle, enjoyed the island of Lanai so much he purchased nearly 98 percent of the island in 2012 for $300 million. As one of his first projects, he invested $75 million in Manele Bay Hotel and turned it into the Four Seasons Lanai, with new restaurants such as Malibu Farms, Nobu Lanai and One Forty. Ellison will spend another $340 million on needed infrastructure on the island.

I spent my birthday this year in Lanai and started the day with a round at Four Seasons Lanai Manele Golf Course. After warming up at the driving range, I hit the links solo, affording me a great opportunity to take in the views and enjoy the warm October day by the Pacific Ocean. 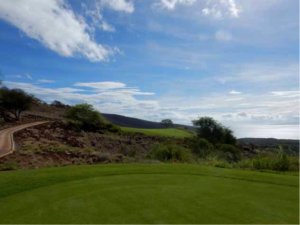 HOLE 5 | 462 yards, par 4
Located at the highest level on the course, Hole 5 offers spectacular views of Maui and Kaho’olawe, and on a clear day like the day I played, you can see the Big Island from the tee box. Pay close attention and read the GPS on the cart that clearly suggests you drive your ball carefully to the left side. The shot from the tee is nearly blind, and unfortunately my drive took a more precariously right path, almost rolling and lost in the brush. In addition, strong drives can easily blow through the fairway, as the second shot drops to the green 60 feet below. I had a tree branch slightly blocking my shot, so I had to take a low shot that careened to the right, rolling on some hardpan by the green. A chip recovery had me up and down for a bogey.

HOLE 6 | 544 yards, par 5
This long, downhill par 5 features a landing zone open enough to let it rip and let it roll. Some big hitters might reach the green in two, as this hole turns as a dogleg right to the green. Those two bunkers on the right can punish those trying to make the green in two and straying off track. This happened to me, costing me a shot in the bunker.

HOLE 12 | 202 yards, par 3
I can only imagine what this hole is like in the howling wind, but the day I teed up the wind was calm and the sun was hot. It was unseasonably warm for this time of year, and it felt a lot like playing golf in the Outer Banks of North Carolina in the middle of summer. As a single golfer, I often caught up with the group in front, and rather than waiting, I turned back and replayed the hole. Doing this on 12 allowed me to use the two-ball birdie play. Players should take a little more club, as coming up short means a lost ball. I teed up two, the first landing in the bunker right center in front of the green and the other squarely on the green, below the hole and about 12 feet from the pin. A one-putt secured my two-ball birdie; after all, it was my birthday!

HOLE 13 | 345 yards, par 4
This hole offers a fantastic vantage point for watching humpback whales during the winter and spinner dolphins year-round. But don’t let the view distract you from focusing on the hole, which does require accuracy from the tee box; aim for the directional bunker through the fairway. A long shot left might find big hitters edging the green. Mere mortals like me will need to play safely in the center of the fairway, and make sure you check out the GPS in the cart for the best proven strategy. My approach was perfect, staying away from the green-side bunker that seems to be a collection point for resort golfers. I two-putted for par — quite an achievement, considering the potential hazards.

HOLE 17 | 444 yards, par 4
I had some fans watching me when I teed off on Hole 17. The greenskeepers were conducting some repairs and backed off as I shot my drive as hard as I could to position “A” on the left side of the fairway on this dogleg right. The carry from the tee box over the cliffs is long, and as there are no bunkers to interfere, you need only concentrate on driving a strong ball to clear and position your drive for your next shot to the green, which sits on the edge of Kaluakoi Point. Your approach is downhill onto a kidney-shaped green. My approach was short, and I then had to make an easy chip to the green, carding a bogey. Not bad for the No. 2-ranked handicapped hole on the course.